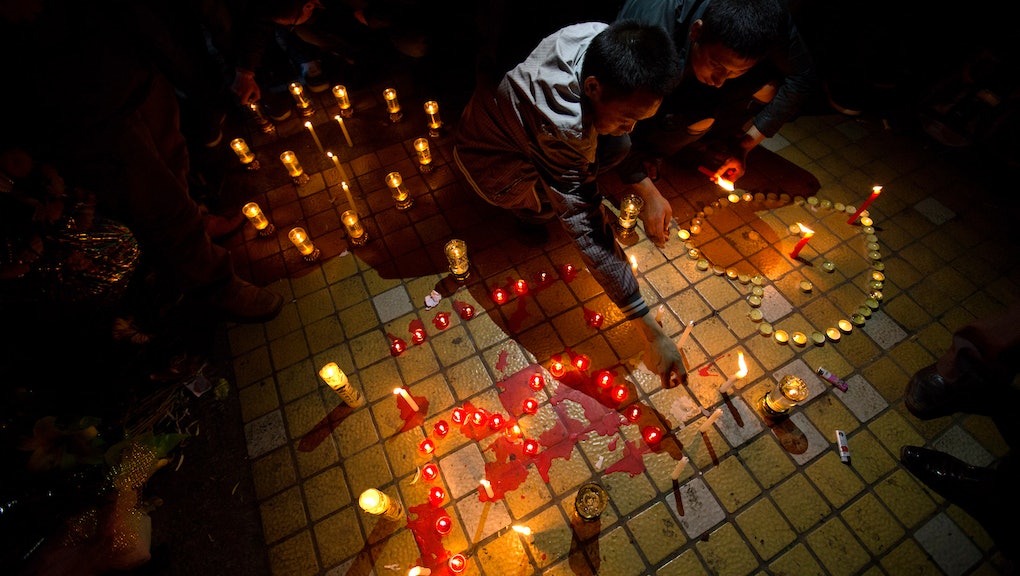 On Saturday night, a group of knife-wielding attackers launched a horrific spree of violence in the Kunming railway station in China's south-west Yunnan province around 9:00 p.m. local time, killing at least 33 people and wounding 143. The death toll makes the attack one of the deadliest in recent Chinese history.

The state-run Xinhua News Agency reported that a group of roughly 10 people (two of whom were women) dressed in black stormed into the busy train station and began slashing at random with large knives and machetes. Chinese authorities have since called the event a "premeditated, violent terrorist attack." Four of the suspects involved were shot dead, one was arrested and the rest remain at large.

The attack was at the main railway station for Kunming in south-west China, the capital of Yunnan province which has more than six million inhabitants. It handles up to 75,000 passengers a day.

An all-out panic erupted as soon as people saw the knife-wielding group enter the busy train station, sending people running in every direction as the group began their brutal attack.

"I was freaking out, and ran to a fast food store, and many people were running in there to take refuge," said Qiao Yuano, a 16-year-old student who was in the station and witnessed the carnage. "I saw two attackers, both men, one with a watermelon knife and the other with a fruit knife. They were running and chopping whoever they could."

Chinese President Xi Jinping said the state has launched "all-out efforts" to investigate the attack, planning to "severely punish in accordance with the law the violent terrorists and resolutely crack down on those who have been swollen with arrogance."

"I saw a person come straight at me with a long knife and I ran away with everyone," local resident Yang Haifei told Xinhua. He was buying a ticket when he turned and saw the group and started running, adding that some people "just fell on the ground."

During and shortly after the attack, people began taking and sharing images of the aftermath on Wiebo, the Chinese Twitter-like micro-blogging site, though many of them have since been censored by the Chinese government for their extremely violent nature. Some, however, were still tweeted out and shared.

What's being called a terrorist attack has since been blamed on militant group of Xinjiang separatists forces, some of whom are believed to be members of the Muslim Uighur population. The Xinjiang region in western China borders Afghanistan, Kyrgyzstan and Tajikistan, and the Chinese government has blamed several attacks on militants there as tensions continuously rise between the government and the increasingly population of Muslim separatists who want to establish an independent state called East Turkestan.

On Sunday, police began questioning members of the Kunming's small Uighur community, about the attack and for information about the assailants.

"How do we know them?" said a Uighur man who gave only his first name, Akpar. "We could not tell if the assailants were Uighurs as they were all dressed in black. We did not like the attack either."

Most attacks blamed on Uighur separatists on China's ethnic Han majority take place in Xinjiang and are not infrequent, but the train station attack took place more than 900 miles to the southeast in Yunnan, which has not had a history of such unrest. Though it's not 100% confirmed that these people are behind the attacks, this is the current line state police are pursuing.