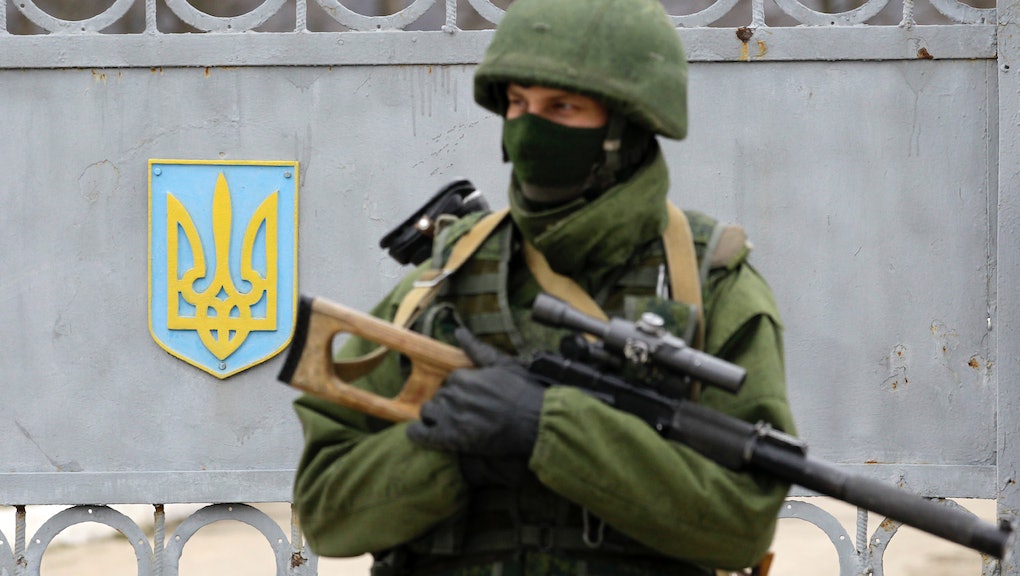 Last week it was Kiev. This week's flashpoint in Ukraine is Crimea. Here's a quick overview of what has happened since then.

If you're not up-to-date with what's been going on in Ukraine, check out this quick guide to the country's EuroMaidan protests in Kiev.

When did this all start?

That's a matter of how far you want to go back in history. Let's stick to the last century. From 1921 to 1954, Crimea was under the umbrella of the Russian Soviet Federative Socialist Republic. To mark the 300th anniversary of Ukraine becoming part of the Russian Empire, Soviet leader Nikita Khrushchev gifted the Crimean peninsula to Ukraine. Unbeknownst to him at the time, the Soviet Union would dissolve less than 40 years later in 1991, thereby separating Ukraine and Russia, leaving Ukraine with Crimea.

In 1992, Crimea became an autonomous republic with its own constitution and parliament. The latest version of Crimea's constitution gives the peninsula some degree of freedom from Kiev. But Kiev's laws still apply in Crimea and Crimean tax dollars still flow through Ukraine.

Who lives in Crimea?

The peninsula is made up of a mix of ethnic Russians, Ukrainians and Crimean Tatars. Currently, the population is 60% Russian, 25% Ukrainian and 12% Crimean Tatars. The lingua franca in Crimea is Russian.

Though they comprise a minority of the population, the Crimean Tatars are a formidable political force within Ukraine. It's important to note that the Tatars were deported from Crimea in 1944 on the order of Joseph Stalin, who accused them of being Nazi sympathizers. Tatars began returning back to Crimea after the collapse of the Soviet Union.

What's happened in the past week?

Russia has been worried about losing influence in Ukraine after Presidet Viktor Yanukovych was impeached. Crimeans are worried about the effects instability in Kiev could have on them.

The majority of Russian-language media, which is widely watched in the predominately Russian-speaking Crimea, has cast the anti-government protesters in Kiev as rabid nationalists and fascists. This has ignited fear among Crimeans that the new power in Kiev will impose their wayward politics on the peninsula. Crimeans are now calling for autonomy from Kiev, and Russia has obligingly come to the Crimeans' aid.

It's unclear whether or not the Russian troops in Crimea is political brinksmanship by Putin, or if Russia would actually take military action in the name of defending Crimean autonomy.

Doesn't Russia have a military base in Crimea?

Yes, Sevastopol. Crimea is currently home to Russia's Black Sea fleet. The area is leased out to Russia until 2024, according to a pact signed by former Russian President Dmitri Medvedev and Viktor Yanukovych.

How many Russian troops are there now?

The United States currently estimates that there are some 6,000 Russian troops on the ground. According to news reports, Russian troops have surrounded several Ukrainian bases in the region and asked the Ukrainians to defect. On Sunday, the new leader of the Ukrainian navy has also sworn allegiance to Crimea, under the watch of Crimea's pro-Russia leader.

Unclear. Russian President Vladimir Putin has made it abundantly clear that Russia will support Crimean autonomy. But it's not clear how the Ukrainian government will react. Interim President Oleksandr Turchynov has mobilized troops and called up the Ukrainian military reserves, but so far Russia has extended control in the region while avoiding military clashes.

What ever happened to Yanukovych?

Well, he was last seen somewhere in the southern Russian city of Rostov-on-the-Don where he gave a press conference. To put it bluntly: He is a political nil right now. Though many pro-Russian Crimeans say he is technically the legitimate president, there is no love lost between Yanukovych and Crimeans. Any fondness for Yanukovych here comes from his ties to Russia, not from the man himself.