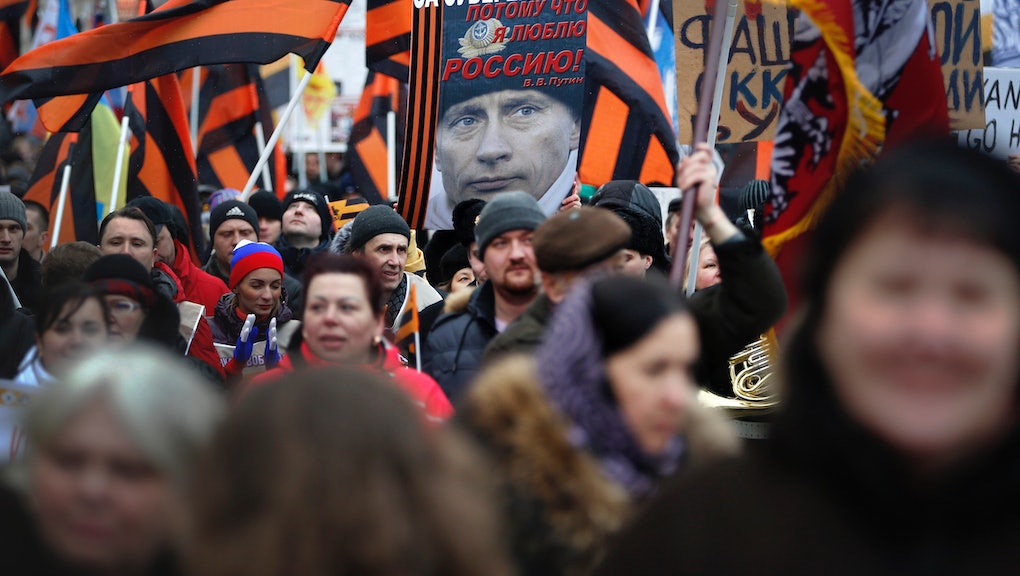 This is What is Now Happening in Ukraine and Russia

Crimea is not the only region in Ukraine seeing massive protests against the new government in Kiev. Demonstrations, sparked by the ousting of President Viktor Yanukovych and the establishment of an interim government, have now spread to surrounding, pro-Russian regions, such as Kharkiv and Donetsk.

Thousands of protesters gathered in these areas, leading to some violent clashes, with around a dozen people injured in Kharkiv this weekend.

Like the Crimea, Kharkiv and Donetsk have a strong population of ethnic Russians — Donetsk also happens to be Yanukovych's hometown and his power base. These protesters are against the Western-leaning interim government and are in favor of stronger ties with Moscow, or a secession from the Ukrainian state.

But the rest of the deeply divided country does not feel the same way. Russia's official decision to enter Ukraine with military intervention has been met with wide protests in Ukraine, especially in Kiev. Many have gathered back at the Maidan, the home of the violent demonstrations against Yanukovych's government, carrying photos of their loved ones who died in the struggle against the pro-Russian government.

The Ukrainian government has called the intervention a "hostile aggression," and is calling on Ukrainian troops to defend its borders.

But in spite of Ukrainian protests and international outrage, Russian President Vladimir Putin is escalating his intervention, declaring that Russia has the right to protect the ethnic Russian population in Ukraine. Russian Prime Minister Dmitry Medvedev echoed the same concerns, arguing that Russia is merely trying to stem the chaos in Ukraine: "Such a state of order will be extremely unstable," Medvedev said. "It will end with the new revolution. With new blood."

On Sunday Russian naval landing vessel Georgiy Pobedonosets entered the bays of Sevastopol, a major city in Crimea and home to a strategically valuable naval base.

A convoy of hundreds of soldiers then moved from Sevastopol to Sinferopol, the regional capital of the Crimea. There hasn't yet been armed confrontation, although the armed forces took to the local Crimean television channel to demand that the Ukrainian army surrender.

The U.S. currently estimates that there are around 6,000 Russian ground and naval forces in the Crimean region.

Putin's intervention has been met with wide support in Russia, with large rallies — 15,000 in St. Petersburg and 27,000 in Moscow — taking place on Sunday in solidarity with the ethnic Russian population in Ukraine. There were also smaller groups of protesting against the intervention, with violent clashes resulting between the two groups. Around 361 anti-war protesters are estimated to have been arrested on Sunday.

But apparently there's one thing that can bring the Ukrainians and the Russian troops together: selfies. While they have not yet fired a single shot in the Crimea, the soldiers have been more than willing to pose for Instagram shots with its residents: