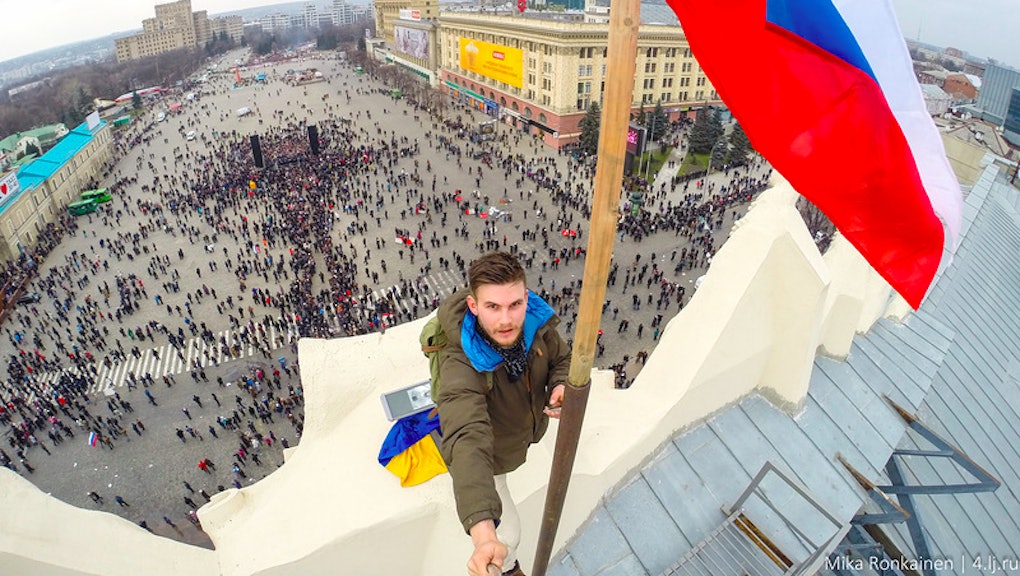 Was This Handsome Pro-Russian Protester Planted by Putin?

Mika Ronkainen is 25 years old and just made one hell of a movie.

In three YouTube videos and the Insta-ready photo above, he depicts a crowd of Russian Ukrainians overpowering guards in Kharkiv, Ukraine's public offices, before climbing to the roof and raising the Russian flag. The photo captures Mika in a heroic pose, resting his boot over the downed Ukrainian pennant with the main square in the background. He added the following post to his personal blog later in the day.

“I am proud that I was able to participate in the confrontation with the militants, who came 'to peacefully protest' with knives in Kharkiv, and hoist the Russian flag on the building administration liberated!” [Google Translate sic]

According to Russia's state propaganda machine, pro-Russian protests like the one Mika attended are commonplace in eastern Ukraine. Having moved military units into Crimea over the weekend, Russian President Vladimir Putin is contemplating whether to instigate a more aggressive push into eastern Ukraine, where many citizens are of Russian descent. His stated reason for the occupation is to "protect ethnic Russians," from a new "extremist" government in Kiev.

Are Mika's photo and film bullshit? Do these protests truly represent eastern Ukrainians' views? Or were the pro-Russia protests engineered?

If the protests are indeed a Russian tactic, it's important to note that Putin has already been more blatantly stoking unrest. For instance, the man photographed below is a friend of the Russian president: Alexander Zaldostanov, nicknamed "The Surgeon," travelled to Crimea on Friday and organized a large pro-Russia protest with his gang of nationalist biker friends.

The Kharkiv Regional State Administration, whose building Mika cheekily mounted and hung the Russian flag from, says that Mika and his friends were  "Russian tourists" as well:

"About 70 people with Russian flags were constantly shouting down speakers at the rally," a spokesperson told PolicyMic. "When a minute of silence was announced for the victims in Kiev – the men started shouting. When the priest was giving a speech...the men shouted again.”

In Mika's video, a group of about 70 men do appear quite suddenly as the peaceful protesters look on (see below, the first part of his three-part YouTube epic).

The mood goes from moderately peaceful to aggressively heated in less than a minute. At one point, men capture a police officer and give him a light beating. Others can be seen goading the more peaceful protesters to get involved, and many oblige. At one point, two masked men bash through a window, while another member of the crowd appears to hurl a traffic cone at a pro-Russian attacker.

All of which begs the larger question: Were Mika and his "pro-Russian" friends agents provocateurs?

The facts provide unsettling answers. The use of agents provocateurs to impede political activism goes back a long time. FBI agents have used such tactics to disrupt the Black Panthers, the Ku Klux Klan and the American Indian Movement. The Metropolitan Police in London utilized agents provocateurs in 2009 during the G20 protests, while Imperial Russia used them to ensnare early Bolsheviks.

In the case of Mika Ronkainen, the Kharkiv Regional State Adminstration was definitely right about one thing – he isn't Ukrainian. Mika is from Moscow, and his social media profile presents him as a handsome and politically active young man. In short, he's the perfect posterboy for a pro-Russia riot.

Putin's use of agents provocateurs may stretch back to the headier days of Euromaidan. In early December, three Ukrainian journalists wrote a lengthy feature for an international news website, outlining several credible scenarios where Russian-speaking agents interefered in the Euromaidan protests. In one episode, “a man wearing a purple anorak at first appears to attack the anti-riot police. A few minutes later, the same man mingles with the police without attacking them, before casually reemerging from the police ranks to rejoin the protesters, as if nothing had happened.” These stories were backed up by Ukrainian TV coverage and several amateur videos available online, and appear to be credible.

I've spotted agents provocateurs online as well. On Saturday, Russian media emphasized the news that Dmitry Yarosh (pictured above), a Ukrainian far-right leader, had supposedly appealed to Islamist terrorists in Chechnya for assistance in Ukraine. Reporters say the appeal came from Right Sector's page on Vkontakte, a social media website akin to Facebook, and was made to Doka Umarov, Russia's most wanted terrorist.

Dmitry Yarosh is leader of Right Sector, an ultra-nationalist group whose masked members and gruff affiliates provided much of the “security cordon” to Maidan square. Members carrying bats and chains currently guard government buildings in Kiev. The presence of neo-nationalists in the new Kiev government is a theme Putin's propaganda machine has frequently riffed on over the past few days, saying they threaten ethnic Russians living in Ukraine.

But according to Right Sector, their website was hacked and the Umarov appeal is a fake: “Our webpage was blocked for half an hour. Now our webpage does not contain that news [about Umarov]. The genuine news of the group is that which is currently published,” the press secretary emphasized. The group insists it has not been in contact with terrorists.

Despite the Russian government's best efforts, the international media has barely picked up on the Umarov story. In fact, while the Guardian briefly referenced a Russia Today article about Umarov in their live coverage, they also noted the screengrab evidence provided by the Russian media was "unconvincing."

I recently spoke to Anton Shekhovstov, an expert on radical right-wing parties in Europe, who told me that he believed the Vkontakte hack was the work of Russians: "If Yarosh wanted to contact Doku Umarov," I asked, "why would he do it publicly?”

“Their account on the Russian VK (Vkontakte) social networking page has been hacked, and someone has posted that fake message to Umarov,” he replied.

Perhaps Putin is employing agents provocateurs because Russians are impressively ambivalent towards war. In order for his invasion to be successful, he needs to show that ethnic Russians are threatened and want to be "free" from the new "extremist" government in Kiev. Mika and the Russian state broadcasters are simply making his job a little easier.

As this goes to press, Ukrainian media is reporting that two women have been spotted at a pro-Russian protest in Donetsk, who were also seen at Mika's domination the day before, in Kharkiv. Concerned Ukrainian residents? No. Foreign agitators.