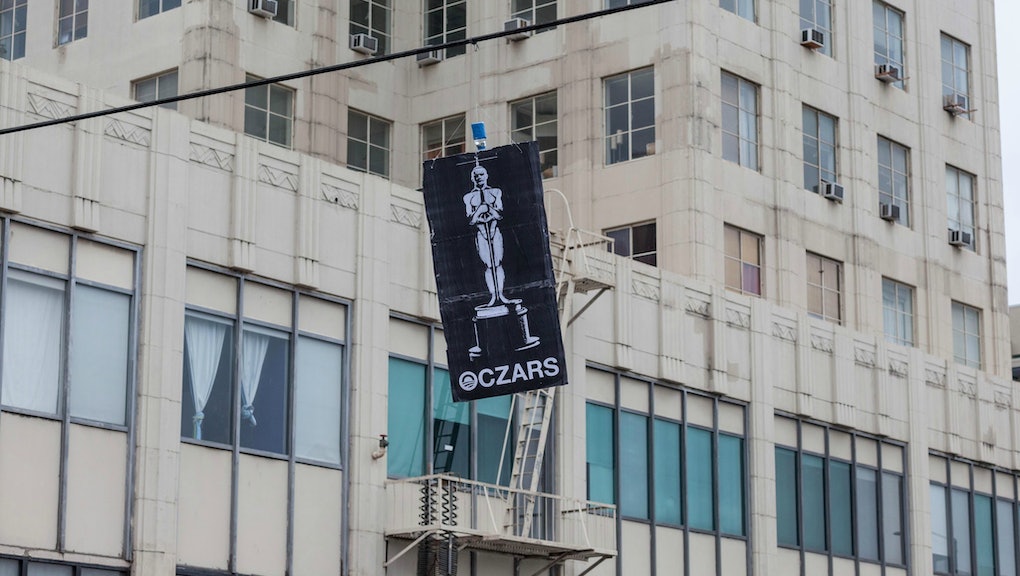 While the Oscars Were Going On, These Posters Were Hanging Right Outside

The news: As Jared Leto's acceptance speech demonstrated, politics and the Oscars are rarely far apart.

But an unidentified street artist took the fight to the ... um ... streets on Sunday, when he/she plastered western Los Angeles with satirical anti-Obama posters.

And the "Oczar" goes to ... Most of the images feature a graphic rendering of the Oscar statuette, with the head replaced by that of Soviet icon Vladimir Lenin. Beneath is written the word "Oczars," with the letter "o" replaced by the president's iconic campaign logo. A separate element is a large silver-colored sculpture, which appears to be a composite of Obama and Lenin's heads.

Conservative outlets have drawn parallels between this work and the "proliferation of 'czars' – powerful officials with no congressional oversight – in the Obama administration." But considering the common right-wing perception of Hollywood as full of "liberal elites," combined with frequent Republican rhetoric characterizing Obama as a "socialist," it seems more likely that this is yet another attempt to link the president with leftist dictators of the past.

But is this a fair characterization? According to Mell Flynn, president of the Hollywood Congress of Republicans, conservatives are routinely discriminated against in the film industry. "I have known quite a few people who were let go from a job after they made their political affiliation known," she told Fox News. "Maybe it was a coincidence, but I doubt it."

The idea of an anti-conservative Hollywood "blacklist" that harms people's job prospects is a common fixture on right-wing outlets. Whether this art is a direct reference to that remains unclear.

What do you think?