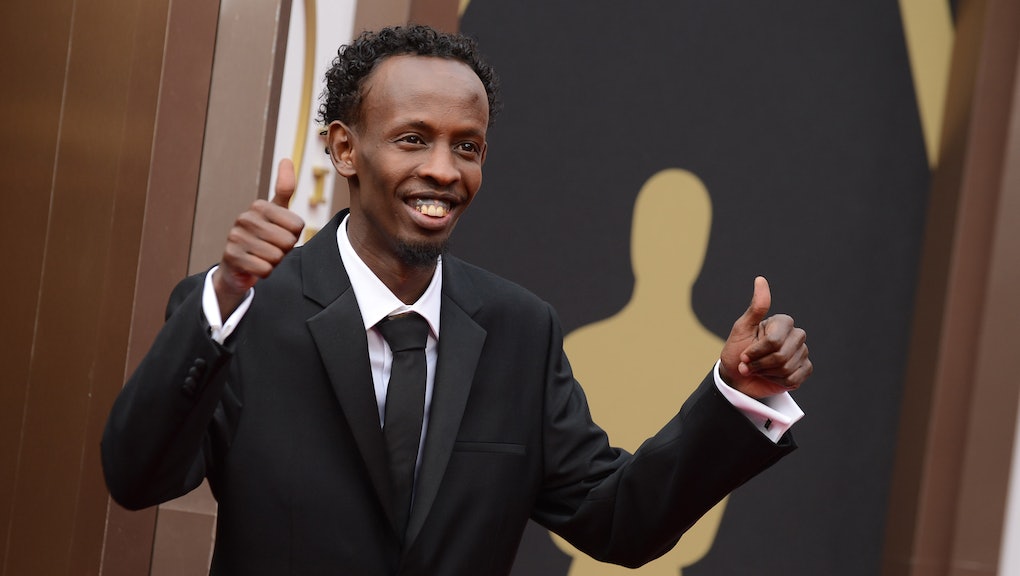 This Oscar Nominee Is Now Broke

Captain Phillips actor Barkhad Abdi had a lot to smile about on Sunday night — not only was his film up for Best Picture, but the first-time actor was up for an Oscar himself for Best Supporting Actor. The former limo driver had already generated a ton of buzz during award season, snatching up a BAFTA win along with Golden Globe and Screen Actors Guild (SAG) nominations. His dazzling rise has been described as a "rags to riches" story by the American media, which is always on the lookout for a feel-good narrative about the transformative powers of — you guessed it — American media.

Except in the case of Abdi, he doesn't have the riches to show for his work.

While Abdi did have a difficult past — he and his family had to escape Somalia's growing civil conflict and settle in the U.S. — the 28-year-old had had some film experience before, having directed Somali hip-hop videos. On a lark, he decided to take part in an open casting call in his hometown of Minneapolis, which happens to have a significant Somali population. After a round of auditions, he suddenly found himself in the role of head pirate Muse, squaring off against none other than Tom Hanks, who was playing the role of the titular Captain Phillips.

Even though Abdi played a crucial role — and ad-libbed the biggest line in the film, "Look at me, I'm the captain now" — he was compensated two years ago with only the SAG minimum: $65,000. The film then went on to gross $55 million worldwide, earning Hanks a multi-million paycheck.

Of course, it makes little sense to compare the salary of a complete industry unknown with that of one of the biggest movie stars on the planet. Abdi was playing an important, but ultimately replaceable role; Hanks had the weight of the movie on his shoulders. But even as critical raves and award buzz followed, the studio did little to change its treatment of Abdi.

After Abdi finished the film, he had to wait until it was released and reviewed. In the meantime, he could not find any more acting opportunities in Hollywood and had to return home to work at his brother's phone shop. "I had made up my mind that I wanted to be an actor but there were no jobs for me at the time because I didn't have any other experience and the film wasn't out so I decided to work with my brother rather than stay at home," Abdi told the BBC.

But once the reviews trickled in, Abdi was nominated for nearly every Supporting Actor award on the circuit. The studio required him to leave his job and show up at swanky Hollywood events to promote both the film and himself, even as Abdi struggled to make ends meet and pay the extravagant prices of a Hollywood life.

"When Abdi is in Los Angeles to promote the film, he subsists on a per diem, good at the Beverly Hilton, where the studio likes to put him up. The town car is available only for official publicity events. His clothes are loaners," according to a New Yorker report. "Recently Abdi requested that he be allowed to stay at a commuter hotel near LAX to be closer to his friend, a Somali cabdriver from Minneapolis, who shuttles him around for free."

Still, Abdi has repeated his gratitude for being given the chance to pursue an acting career. "I love filmmaking and acting and it's something that I'm passionate about, so I'm truly glad that it's an adventure for me. I'm still a beginner in this business and I'm just looking for good stories. It's very exciting and tiring at the same time," Abdi said of his future prospects.

Now that the Oscars are over, Abdi is focusing on capitalizing on his momentum to make a lasting career. He is planning on moving to Hollywood with Faysal Ahmed, who played his villainous second-in-command in Captain Phillips. He now has an agent and is reading scripts for both film and TV; he is in fact already attached to his second film role ever, playing the South African marathon legend Willie Mtolo in the upcoming biopic The Place That Hits The Sun. He already has the ingredients for success: talent, dedication and, most importantly, buzz. Let's just hope that Hollywood allows him to succeed instead of fading away after his moment in spotlight.