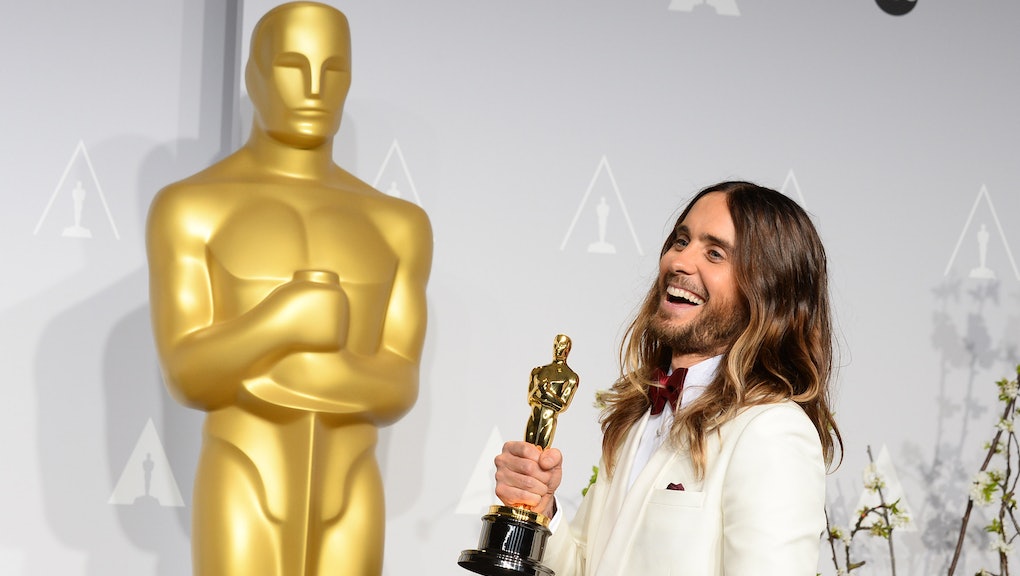 On Sunday night, shaggy actor Jared Leto ascended the Oscars podium to pick up his Best Supporting Actor statue, awarded to him for his performance as a transgender woman in the 1980s period piece Dallas Buyers Club.

Clutching the prestigious award, Leto thanked a generally enthusiastic crowd for the honor, which is his first from the Academy. However, not everyone has been so quick to praise Leto's portrayal of the HIV-positive Rayon, as many in the LGBT community are conflicted about the media and Leto's rhetoric preceding Sunday's ceremony.

Here are some highlights of the story that all those following should be aware of:

As the Oscars progressed, trans activists around the world took to Twitter to voice their frustrations using the viral hashtag #NotYourRayon, symbolizing the diversity of the trans community.

Whether expressing frustration with the character or simply putting a face to the community, Twitter users across the Internet reminded Oscar viewers why they weren't "your Rayon."

After winning the Golden Globe for Best Supporting Actor in January, many viewers felt that Leto trivialized the struggles of the trans community by giving a speech that revolved around his appearance.

"I did not ever use any prosthetics in this film. That tiny little Brazilian bubble butt was all mine," Leto said to audience laughter. "It was a very transformative role. I had to do a lot of things to prepare. One of the things I did was wax my entire body, including my eyebrows."

Leto also did not mention the AIDS crisis in his speech, despite it being one of the the central plot points for his character.

3. NBC tweet proves some members of the media still don't get it.

To outsiders it can seem like a small thing, but there's a reason the trans community is offended by issues of nomenclature. Following Leto's Oscar win, someone from NBC News tweeted that the actor had won for his role as a "transvestite."

Although the tweet was quickly corrected, the mistake is proof that there's still much that needs to be done in terms of transgender awareness in America.

4. Leto's Oscar speech did not actually include the word "transgender."

Although the consensus seemed to be that Leto's acceptance speech at the Oscars was better than his disastrous, tone deaf attempt at the Golden Globes, others noted he did not specifically thank the trans community.

With time running out, Leto acknowledged the "36 million people who have lost the battle to AIDS" as well as "those of you out there who have ever felt injustice because of who you are or who you love." However, he did not ever utter the word "transgender."

While some were angered by this oversight, others, like Mara Keisling, executive director at the National Center for Transgender Equality, said they were prepared to give the actor the benefit of the doubt.

5. Here's a list of trans actors who also could have played Rayon.

Many people believe that Jared Leto should never have been cast as Rayon, with the role instead going to a trans actor. While not as well known as their cisgender peers, there are several trans artists who could have potentially taken Leto's place, notes Indiewire:

Some of the harshest criticism so far has been leveled by writers like TIME magazine's Steve Friess, who claim Rayon was more prop than flesh-and-bones character.

"What did the writers of 'Dallas Buyers Club' and Leto as her portrayer decide to make Rayon? Why, she's a sad-sack, clothes-obsessed, constantly flirting transgender drug addict prostitute, of course," Friess writes. "There are no stereotypes about transgender women that Leto's concoction does not tap. She's an exaggerated, trivialized version of how men who pretend to be women — as opposed to those who feel at their core they are women — behave. And in a very bleak film, she's the only figure played consistently for comic relief, like the part when fake-Woodruff points a gun at Rayon's crotch and suggests he give her the sex change she's been wanting. Hilarious."