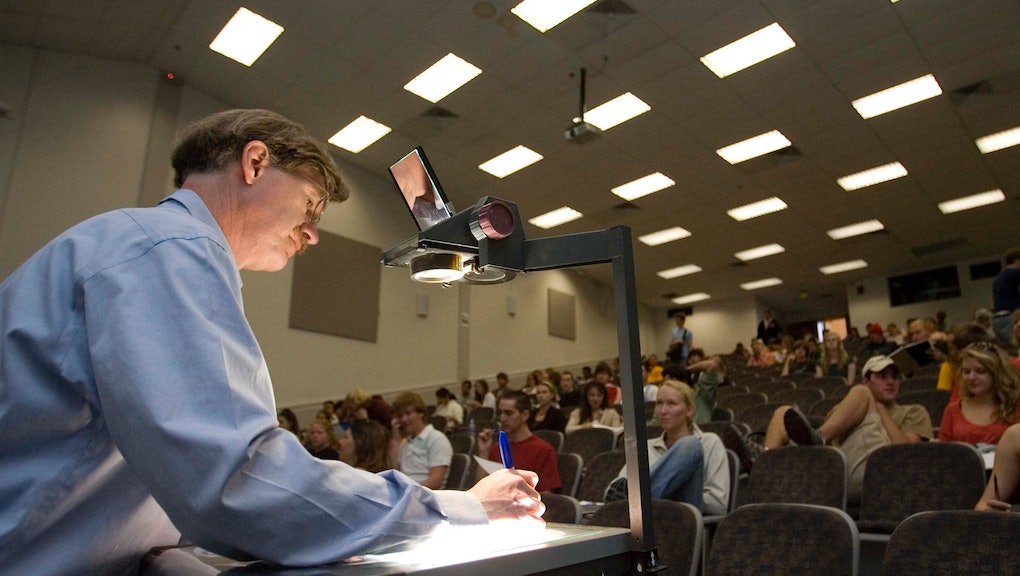 Can You Beat Most Americans at the National Science Quiz? Take the Test

The National Science Foundation (NSF) recently released information about how well the American public knows basic science concepts. It turns out, not so well. In fact, one in four people are convinced that the sun orbits the Earth. Since that information is close to 2,000 years old, you can imagine that things went downhill pretty fast.

However, American values and the Internet are here to save the day. Four out of five Americans have a strong interest in new scientific discoveries, and 40% believe that we spend too little money on scientific research and education. We also tend to trust science and technology information from the Internet, even more than political news. However, this is not without the Jenny McCarthys propagating bad science, and so instead of slashing science stories from reputable journalists, news outlets should be adding them (ScienceMic, anyone?).

In short, we want more science, but we're not that great at it right now. See where your basic science skills stand compared to other Americans by answering the 10 questions from the NSF. Hint: mark your answers separately and check them below.

1) The center of the Earth is very hot. TRUE or FALSE?

2) Continents have been moving their location for millions of years and will continue to move. TRUE or FALSE?

4) All radioactivity is man-made. TRUE or FALSE?

5) Electrons are smaller than atoms. TRUE or FALSE?

7) The Universe began with a huge explosion. TRUE or FALSE?

8) It's the father's gene that decides if the baby is a boy of girl. TRUE or FALSE?

9) Antibiotics kill viruses as well as bacteria. TRUE or FALSE?

10) Human beings, as we know them today, developed from earlier species of animals. TRUE or FALSE?

1. The center of the Earth is very hot.

It's really, really hot. It's about 6,000 degrees Celsius (10,832 degrees Fahrenheit). The discovery of Earth's inner core is attributed to Dr. Inge Lehmann, who was a seismologist in the 1920s. She studied at a progressive school in Copenhagen, which dared to assume that women could match men in intellectual capabilities.

About 16% of your fellow Americans answered this question incorrectly.

2. Continents have been moving their location for millions of years and will continue to move.

Alfred Wegener must have been awesome at building puzzles. He noticed in the early 1900s that the Atlantic coastlines seemed to match up, like a puzzle. This led him to theorize that perhaps all the landmasses were at one time connected. He caught a good deal of flack for this crazy hypothesis, but it turned out to be true. Later work by Henry Hess on seafloor spread supported Wegner's idea about Pangaea.

About 17% answered this question incorrectly.

THE EARTH GOES AROUND THE SUN.

Copernicus is often credited with this discovery in the 1500s, but it was actually a claim made as early as 200 BC by Samos.

About 26% answered this question incorrectly. Sigh.

4. All radioactivity is man-made.

Radioactivity is the result of the decay of an unstable atom. Radioactive materials are all around us and have always existed. Humans have also made a few, like Einsteinium.

Radioactivity was discovered by Henri Becquerel in the late 1800s by accident when he was researching phosphorescence. Becquerel went on to become a Nobel Laureate.

About 28% answered this question incorrectly.

5. Electrons are smaller than atoms.

About 47% answered this question incorrectly.

The first laser was made by Theodore Maiman in 1960. Interestingly, he built it because he just thought it was cool. Maiman has said, "A laser is a solution seeking a problem." We now use lasers for everything from scientific applications to printing.

About 53% answered this question incorrectly.

7. The universe began with a huge explosion.

The Big Bang Theory took root in the 1920s with the help of Georges LeMaitre, who laid the theoretical groundwork based on Einstien's Theory of Relativity. However, he had no data to back up his theories, just the mathematical model that it was possible, so most scientists ignored him.

Even Einstein wasn't on board with this new idea just yet, but by the end of the 1920s, Edwin Hubble added the data to support this idea. Hubble observed that galaxies that were further away were moving faster than those closer to use supporting the idea of an expanding universe.

About 61% answered this question incorrectly.

8. It's the father's gene that decides if the baby is a boy of girl.

Sorry, ladies. This one is always up the the guy. In 1902, geneticist Walter Sutton discovered the sex chromosomes. Not all animals determine sex by the same biological mechanism. Some organisms have a completely different system, and this threw a wrench in convincing the scientific community that the X and Y chromosomes determined the sex of a baby. However, this got sorted out by E.B. Wilson, who discovered two major mechanism of sex determination that accounted for all species.

About 37% answered this question incorrectly.

Viruses are one of the strangest and most awesome things. I say things because they're not living, but rather just a piece of DNA or RNA floating around in a protective shell looking to break into your body and take over you cells. Dmitri Ivanovsky was the first to discover these alien-like infectious agents in 1892 while looking to solve the mystery of infected tobacco plants in the Ukraine. Because viruses hijack host cells, they are not able to be attacked by drugs like antibiotics. To do so would mean that your own cells would be targeted for destruction.

About 49% answered this question incorrectly.

10. Human beings, as we know them today, developed from earlier species of animals.

There's so much evidence on this one that it could be a book. In fact, there already are thousands. Thoughts and ideas about the evolution of humans began in the scientific community in the 1700s with Georges-Louis Leclerc. Over time, the idea was ruminated on by many scientists, but Darwin's seminal work On the Origin of Species gave it traction. Darwin knew that his proof of evolution would cause such an uproar that he was silent about his data for more than 20 years. He only published it because Alfred Russel Wallace found the same evidence and was about to publish his work. Darwin may have wanted to avoid controversy, but not at the expense of infamy.

About 59% answered this question incorrectly.