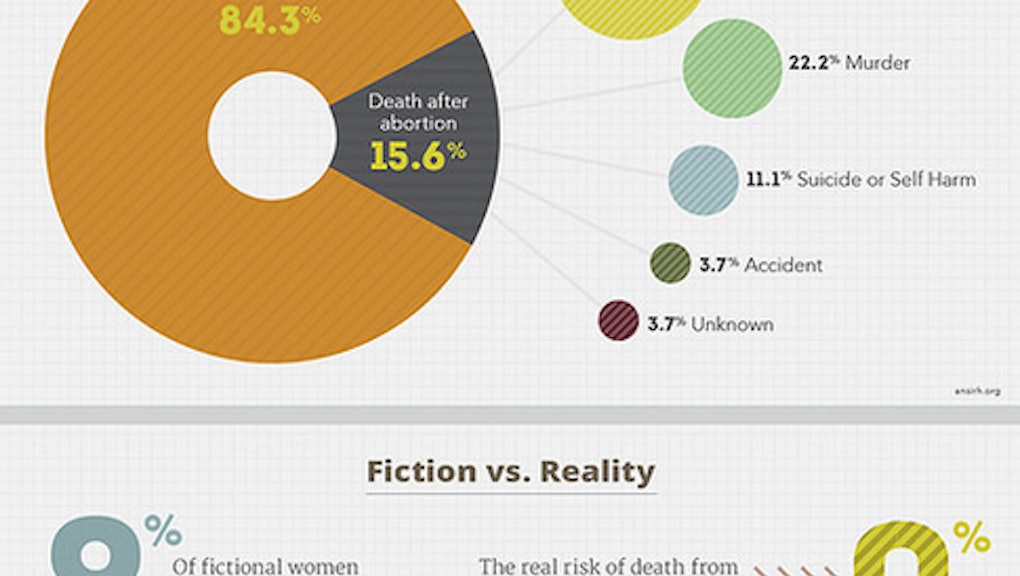 Hollywood's Problem With Abortion in One Chart

The most dangerous place in the U.S. to get an abortion? No, it's not Kentucky, or Alabama or even Texas — it's on your television screen.

That's the verdict from Abortion Onscreen, a project from research group Advancing New Standards in Reproductive Health. In a study published last month, researchers watched every single movie and TV episode from the last hundred years that included an abortion plotline.

Here's what they found:

Let's break this down.

Statistically speaking, the risk of dying from an abortion in the U.S. is zero. In the earliest stages of pregnancy, it's roughly one in 1 million. In the latest months, when abortion has been much more rare, it's one in 11,000, less than one-hundredth of 1%.

Even more jarring is this caveat is that the 9% figure applies only to characters who actually went through with their abortions. When the pool is widened to include characters who considered abortions, the number leaps to 14% of storylines ending in the woman's death. The researchers found 10 cases of characters who died while considering abortions that nine were murdered and one committed suicide.

It may be an easy out for writers looking to tie up loose storylines, but it also reads an awful lot like slut-shaming in the form of karmic retribution.

At its best, entertainment can deepen our understanding of complex social problems (think Dallas Buyers Club and AIDS, or The Wire and, well, basically anything). But at its worst, it can manufacture problems where none exist.

What we see onscreen doesn't just stay onscreen. The misconceptions overrepresented in film and on TV aren't isolated ideas — they permeate public policy, too. And many of the most recent anti-abortion laws use the same argument embraced by Hollywood scripts: Abortion is inherently dangerous.

As long as Roe v. Wade remains in place, legal abortion can't be completely legislated away, but it can be regulated into near-nonexistence — and anti-abortion lawmakers are doing just that in the name of protecting women's health.

Last fall, Texas enacted sweeping new restrictions requiring, among other things, that abortion providers have admitting privileges at nearby hospitals.

Illinois and Oklahoma state legislators are considering similar bills of their own.

In Arizona, the restriction is set to take effect on April 1.

In Mississippi, a law that threatens the state's lone clinic is headed to a federal appeals court this spring.

On paper, these laws are intended to protect women from shoddy medical care. But in practice, the American College of Obstetricians and Gynecologists argues, they're medically unnecessary barriers designed to limit access to an undeniably safe medical procedure.

The surprising frequency of abortion plotlines — the study found 385, including 87 on primetime network shows — "doesn't mean there aren't still many social myths around abortion," the researchers wrote.

Those "social myths" affect a fairly sizeable chunk of the population: Currently, half of all pregnancies in the U.S. are unintended. Of that half, 40% end in abortion.

Clearly, stigma doesn't make the need disappear. What it does is create a false understanding of abortion, one that paves a clear path for bad policy.

Granted, there are shows that have taken a clear and compassionate look at abortion, like Mad Men with Joan Holloway or Grey's Anatomy with Christina Yang, but these characters' storylines are few and far between. For now, it seems that the anti-abortion movement has found itself an unlikely ally in Hollywood and audiences everywhere are unwittingly paying the price.