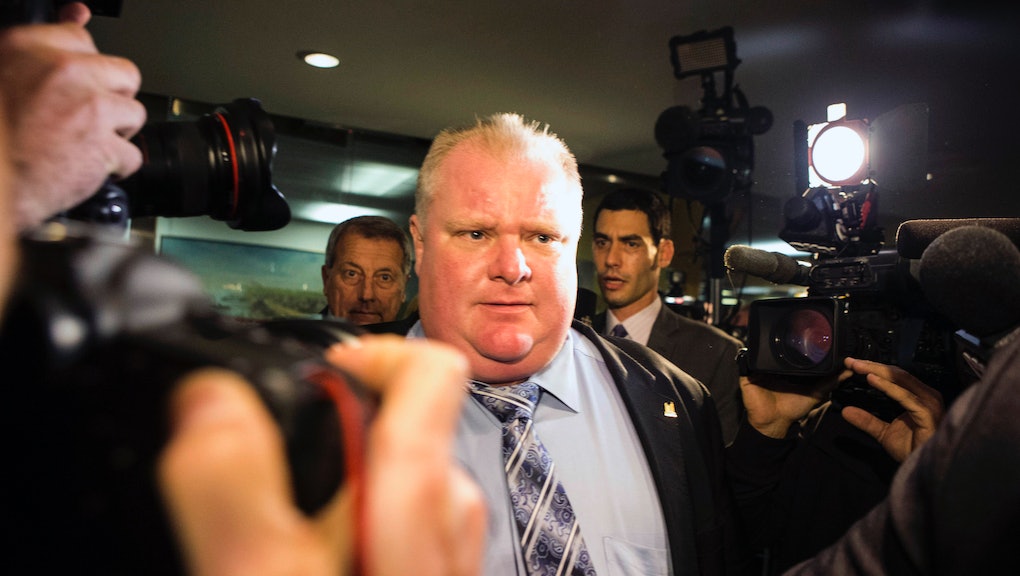 How shamed Toronto Mayor Rob Ford thought making an appearance on Jimmy Kimmel Live was a good idea stretches the limits of comprehension. But he proceeded regardless and came away with an extremely mixed bag of results.

The tone of the interview was set early on, when Kimmel poked fun at Ford's wardrobe. "Why are you dressed like a magician?" he chuckles. From there, things proceeded — gently at first — downhill:

"Why are you here?" Kimmel implores the mayor, saying what the rest of us were undoubtedly thinking. "What good could come of this?"

He then reads excerpts from angry letters written by Torontonians protesting Ford's appearance on the show: "This is disgusting," says one. "Having our embarrassment of a mayor on your show is a slap to all Torontonians ... Really disappointed you're giving this abusive exploiter the time of day, Jimmy ... I hope you remember that clown you're about to trot out is a very sick, very bad man."

It doesn't get much better after that:

The second segment consists of an unflattering photo comparison between Ford and Los Angeles Mayor Eric Garcetti, followed by Kimmel disparagingly wiping sweat off Ford's forehead. "Do you mind if I dab you, Mr. Mayor?" he says. "I'm going to auction this off on eBay afterwards."

Then comes the dreaded but inevitable video montage:

Kimmel starts by making a few weight-related jokes of dubious tastefulness at the mayor's expense. Then he proceeds with a sort of highlight reel of Ford's well documented debauchery. Included are such classic moments as Ford walking directly into a camera, Ford screaming horrific threats about an undisclosed "enemy" and Ford running at a woman during a heated council meeting and shoving her.

Finally, it all comes to a merciful end:

Kimmel's last line says it all: "You are the most wonderful mayor I have ever witnessed." This encapsulates the seemingly miraculous goodwill Ford has generated in various segments of society, which in turn have prompted him to run for mayoral re-election in October.

A re-election run, despite a high-profile substance abuse scandal, various acts of public drunkenness, domestic violence allegations and multiple acts of general buffoonery. "I wasn't elected to be perfect," he says at one point.