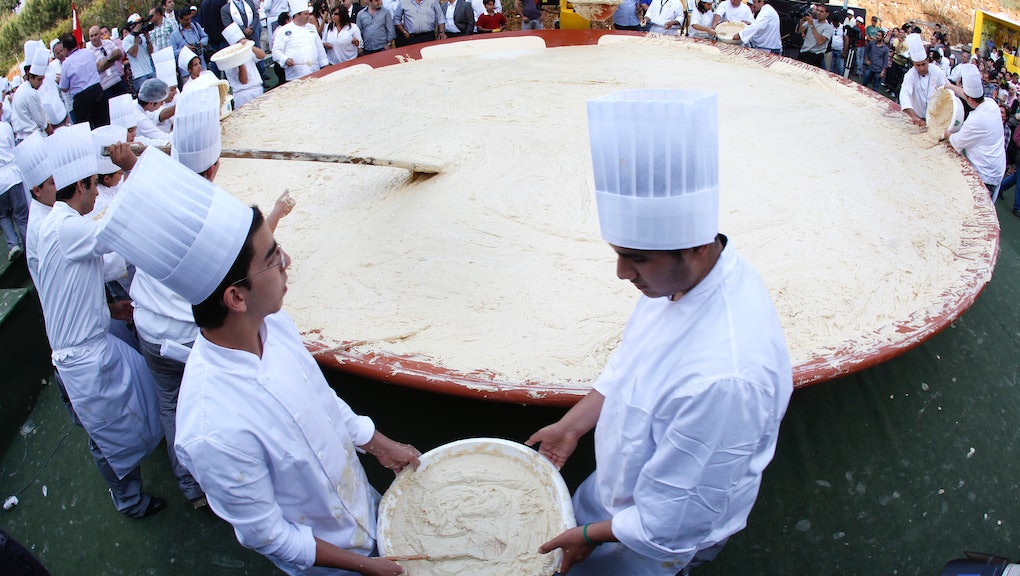 The Strange and Very Real Politics Behind Hummus

Hummus is more than just a dish. As Anthony Bourdain found out when he visited Israel and Palestine in 2013, the hipster's favorite baby carrot dip is charged with cultural significance and its history is largely disputed. The quarrel over hummus ownership has gradually been absorbed into the larger framework of the Israeli-Arab identity clash, the Israeli adoption of the dish is often interpreted as yet another form of imperialism by its Arab neighbors.

Yet, of all the conflicts that plague the region, the fight over hummus has proven relatively harmless and absolutely delicious.

We still don't know exactly who invented hummus, and perhaps we shouldn't care so much. Seemingly a much more relevant question, and one at the heart of the recent hummus-based controversy, is: Which country makes the best hummus?

The hummus conundrum has its fair share of participants. Countries claiming historical ownership of hummus include Greece, Israel, Jordan, Egypt, Palestine, Turkey, Syria and Lebanon. In fact, each makes a rather distinct type of hummus, and doesn't always use it in the same way.

In most Arab countries, as well as in Greece, hummus is an appetizer, usually one of dozens served in a traditional mezze-style dinner. In Israel, hummus-mania has risen to the next level, and is often consumed as a main dish. In fact, Israeli food chains and restaurants that specialize in hummus have been rapidly expanding, and you can find several franchises in New York today. This, however, is not to say that hummus is less important in neighboring Arab countries. It may only be a small part of the mezze, but, as Guy Helou, a medical student in Beirut and food aficionado puts it, "In Lebanon, the mezze is everything."

Part of the reason why the dispute over hummus is so difficult to settle is that its origins are quite hard to trace. In fact, we still don't know for sure when and where hummus as we know it came into existence. It is worth noting that hummus literally means chickpea in Arabic, and that chickpea-based cooking has been around for thousands of years in the Middle East. But when the actual garlic-infused paste was invented is anybody's guess. Most accounts agree that hummus became a traditional dish in the Middle East in 13th century Egypt.

Lebanon recently decided to take legal action to claim full ownership of hummus. In 2008, the Association of Lebanese Industrialists began procedures to register hummus as a national dish. To many Israelis, this was a ridiculous move akin to trying to nationalize bread. But the Lebanese point out that similar cases have been given justice, for instance when feta cheese was successfully trademarked by Greece in 2002. The whole venture might make more sense if we consider that the global hummus market is worth around $1 billion.

Unfortunately, what is probably the most important culinary question of the decade is tainted by political tensions and is inherently biased, making it hard, if not impossible, to settle.

Purists will tend to defend Lebanese hummus as the true heir to all chickpea pastes. But the Israeli camp also has its fair share of die-hard activists. It might be down to a matter of personal preference. We can, however, safely say that both Israeli and Lebanese hummus extensively outrank the jalapeño or spinach-topped abomination sold at your local Whole Foods. But, looking at the divide within the frame of the Arab-Israeli conflict, it is clear that standing down is not an option.

In 2010, the hummus wars took on another dimension as things escalated into the absurd. Israel and Lebanon decided to settle things the old fashioned way and began to compete for who could make the largest hummus dish.

In January of that year, a 9000-pound hummus dish set a new world record in the Arab Israeli village of Abu-Gosh, only to be eclipsed a few months later by an astounding 22,000-pound rebuttal from Lebanon.

The question of quality is no closer to being settled, but no matter how you look at it, the outcome has largely been positive. Not only is this the first Arab-Israeli conflict in history without a single rocket fired, but the end result was magnificent. Regardless of personal preference, I think that there is one thing we can all agree on: The world can always do with an extra 30,000 pounds of fresh hummus.