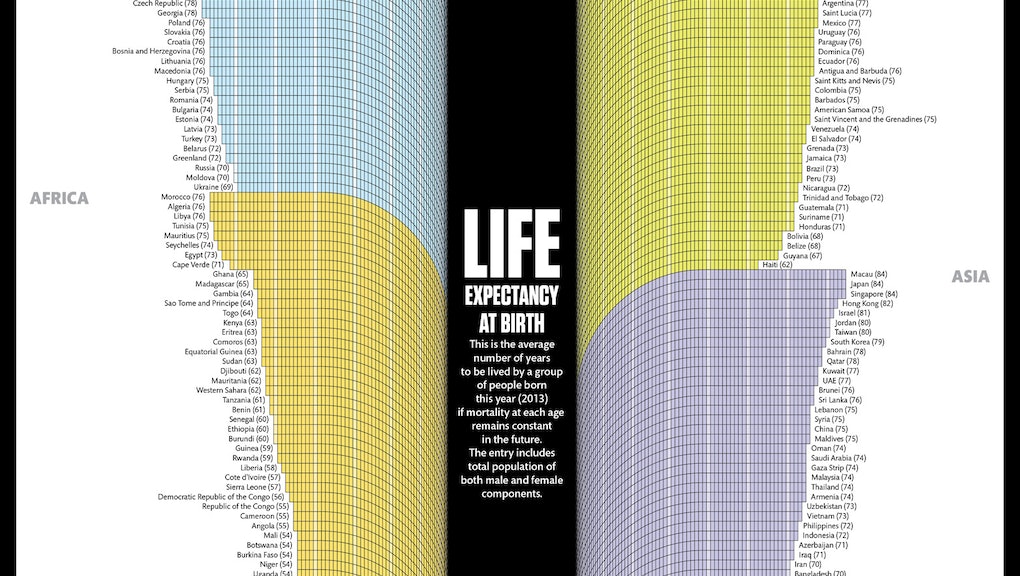 This Chart Predicts Life Expectancy Based on Where You Were Born

Graphic designer Marcelo Duhalde has put together this fascinating infographic showing you just how long you'll likely live based on where you were born. It's clear from just a quick glance that some of us are far luckier than others based on what seems like a combination of good luck and privilege.

The United States doesn't rank particularly well on the list. Our less-than-fantastic life expectancy of 79 comes in at less than most of Europe and far behind world leader Monaco at 90 (which probably benefits from its large population of super-rich individuals). But even our rankings seem very reassuring compared to the continent of Asia, which has a life expectancy of 73, and Africa, which has a depressing life expectancy of 60 (albeit much higher in North Africa). Two countries are tied for the lowest life expectancy: Chad, plagued by endemic corruption, poverty and political instability, and HIV-ravaged South Africa (with an estimated 12% of the country infected in 2007) come in at a disheartening 49. They're both followed closely by conflict-torn Afghanistan at 50. Life, as we've always known, is substantially unfair to people with the misfortune of being born in countries torn by internal conflict or predatory international action.

But don't worry, Millennials, you'll still live relatively long and comfortable lives with above average medical treatment. However, you won't live as long as people in some other countries, and some studies suggest you'll still be squeezing income out for eight years after your parents' generation retired, leaving you with substantially less time to enjoy your golden years.