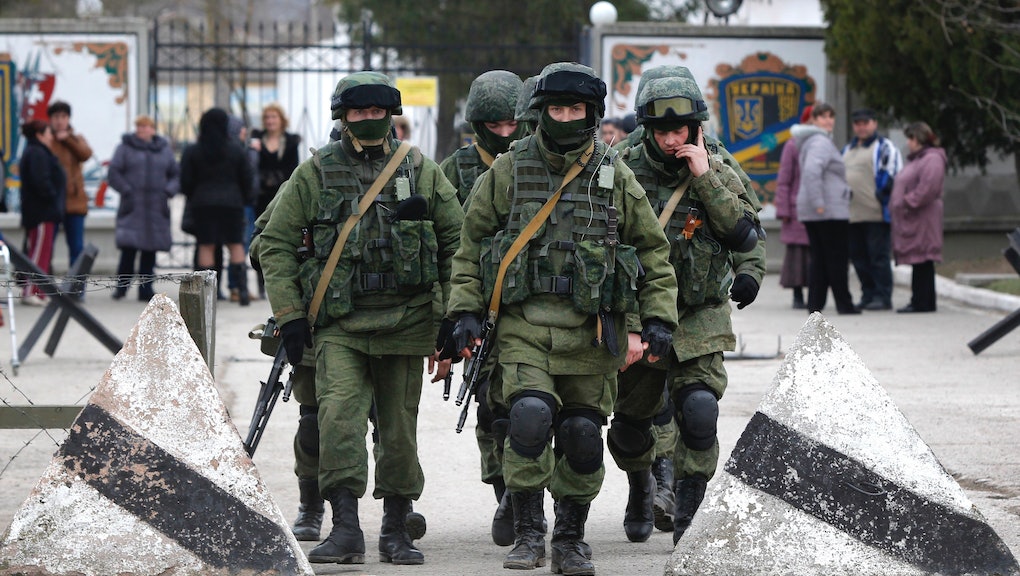 Your Field Guide to the 'Experts' Discussing the Crisis in Ukraine

The situation in Ukraine has been changing rapidly since late last week, following the deposition of former Ukrainian President Viktor Yanukovych, and the mobilization of Russian warships and an estimated 6,000 Russian troops in and around the Crimean peninsula. The deadline of a reported — and repudiated — Russian ultimatum has come and gone, but nerves remain frayed throughout the region and around the world. Diplomats, including U.S. Secretary of State John Kerry, are frantically attempting to de-escalate the situation before shots are fired.

As tensions mount, thousands of people have taken to the Internet to make innumerable arguments for or against European Union, NATO, and United States involvement in the conflict. Here's a field guide (replete with a bingo card) to the various personalities you can expect to encounter over the next few days, as we all wait with bated breath, and hope beyond hope that the tense political situation fails to devolve into an all-out war.

This armchair warrior, an American classic, comes in many forms. On the right, you'll find the hardline realist who will not tolerate a single insult to America's masculinity — er, power. On the left, you'll find the Clinton-era interventionist who believes it's America's duty to lead the world as a beacon of light, freedom, hope and fly-by bombing campaigns.

Why should we intervene in Ukraine when we could be feeding children in Haiti, or building schools in Uganda, or vaccinating children in India? At any rate, the Humanitarian was far more interested in discussing Ukraine when the conversation was about those heroic Occupy-like protests in Kiev.

This sudden expert on Crimea, the Ukraine, Russian military interventions, the Black Sea, and naval brinksmanship wants to bring facts into the discussion, provided that learning those facts doesn't take more than five minutes of Internet browsing. He or she will eventually steer the conversation toward their favorite unrelated anecdote, which is probably about this guy. (See also: the Freshman.)

This commenter doesn't want to talk about the situation in Crimea, mostly because they don't really know where it is. America First is tired of all these useless foreign entanglements that involve looking at maps and remembering funny sounding place names like "Sevastopol" or "Europe." (See also: the Partisan.)

Treats the escalating conflict as a personal crisis, and makes it all about themself. Though he or she has never been to Ukraine, and doesn’t have any ties to it, the Panic Attacker is genuinely upset, and would greatly appreciate your sympathy in this, the most trying of times.

Sees military brinksmanship on the other side of the world as a great lead-in to talking about their domestic issue of choice, be it getting guns off our streets, marijuana legalization or O-bummer-care. (See also: America First.)

This sage wants to talk about how the overextension of the U.S. military into Iraq and Afghanistan has hamstrung the United States when it comes to international intervention. Told You So fails to propose a solution to this issue (time travel, perhaps?) and thinks the most proactive means of addressing the current crisis is rehashing the policy mistakes of the past dozen years.

The gamer is preoccupied with joking about the strategic nature of the Kamchatka peninsula, applying their Call of Duty knowledge to actual military conflict, and wondering whether, given the chance, he or she could actually 360 no-scope Putin.

This world news hipster wants to name drop some emerging issues that you probably haven't heard of yet, like that massacre in Myanmar, or the stabbings in Kunming, China. Rest assured that they were talking about instability in Ukraine way back in October, a month before Euromaidan even began.

In Soviet Russia, so-so jokes laugh at you! What a country! (To be fair, before he emigrated to the Borscht Belt, Smirnoff grew up in Odessa, making his trite humor almost, but still not, appropriate.)

This commenter is focused solely on the fact that Russian President Vladimir Putin has argued against past U.S. interventions, or that American President Barack Obama has argued in favor of them, almost as if world leaders are less interested in consistency as they are in political expediency or something.

The Cold Warrior knew it was just a matter of time before those freedom-hating commie pinko bastard bedwetters, the Ruskies, rose again and returned the world to a simplistic, easy-to-understand, us-versus-them bipolar system. Not that the Cold Warrior is happy about that, or anything. (See also: the Anti-Imperialist.)

The headliner is your go-to source for quickly breaking, entirely unconfirmed news about Russia's latest ultimatum — or denial, as the case may be. You heard it here first, whether or not it's true.

This person is, or claims to be, located in Ukraine right this very minute. Whether they're located in Kiev, or Crimea, or neither of the above, the Ukrainian serves as a first-person source for details on the crisis, and will be pressed into service as a voice for all Ukrainian people.

This person isn't in Ukraine, but claims to have personal ties to the country. While this group includes individuals who absolutely have every right to worry, from people who grew up in the country to folks who have relatives there, it also includes people who studied Ukrainian dance as children, or just really like Veselka.

So far, the Facebooker has merely posted a status update in solidarity with the people of Ukraine, but you better believe they're googling frantically to see what, exactly, they should be changing their profile picture to.

The Anti-Imperialist understands that the current conflict is the fault of the capitalist countries of NATO, which are clearly intent on subverting the self-determination of the Ukrainian people to align with Russia. Sure, it may seem coercive when Russia parks warships off the coast and demands the keys to military bases, but that's nothing compared to the rump parliament and fascist jackboots of the Western invaders. (See also: the Cold Warrior.)

This student of Russian literature, Slavic history, or 20th century politics would like you to know that they're currently taking a course that has, at some point, mentioned Ukraine. The Freshman can bring some much-needed facts to the discussion (The Crimean War! Tatars! The Black Sea Fleet!), but will crumble if pressed on any one subject. (See also: WikiPhD.)

This Russian nationalist would like you to know that you and your countrymen are a bunch of n00b pussies. Sure, he'd prefer to beat the crap out of you in person, using his terrifying MMA fighting skills, but he'll settle for threatening you with his indescribably large and dangerous botnet.

The Well Wisher doesn't have much to say on the subject of Russia's incursion into Crimea. Instead, he or she is stepping into discussions merely to hope that, whatever happens, everyone is okay.

This member of the far-right party Svoboda has been roaming the streets of Kiev since November, and, unfortunately, will not be silenced. While the Nationalist is virulently anti-Russian and pro-Ukrainian, they also, like Svoboda leader and terrible human being Oleh Tyahnybok, believe that the real problem isn’t the Russians, but the Poles and the Jews.

Sure, we could talk about the current geopolitical situation, or we could talk about how scary nuclear weapons are, and the tenuous threat of a nuclear standoff between the United States and Russia, based on the 1994 Budapest Memorandum on Security Assurances. Did the Nuclear Option mention Chernobyl for no reason? You bet your sweet ass they did.

Why don't you read my funny international Polandball comix, rather than the news?