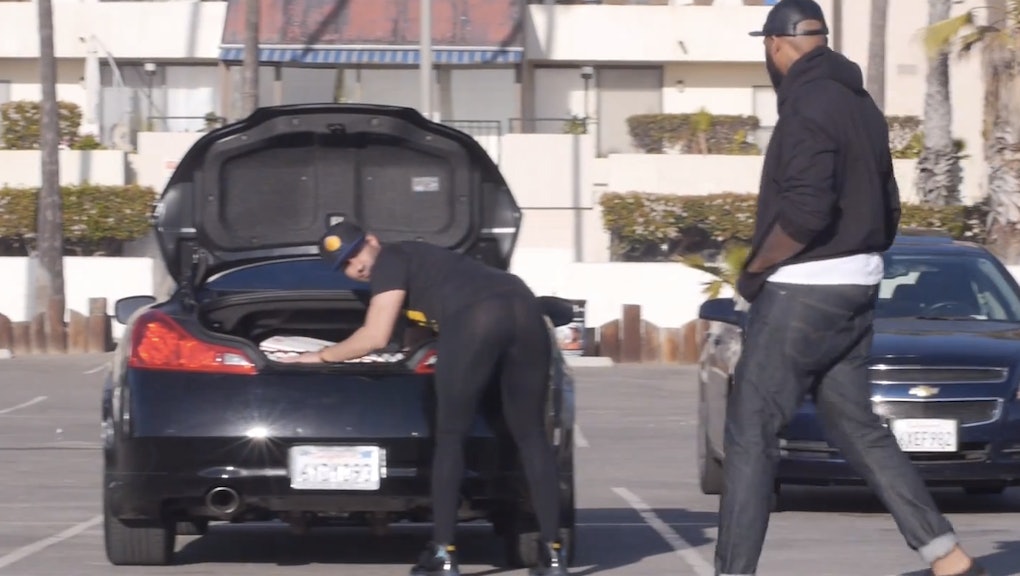 This Prankster in Yoga Pants Makes Powerful Point About Sexism

If you encountered Youseff's butt in a parking lot, would you stop to stare?

On a scientific quest to prove that the male gaze generally just can't resist an upturned behind, Youseff Saleh Erakat, AKA FouseyTube, put his assets to the test and collected some field observations during a prank involving an unidentified parking lot and some very tight stretch pants.

"A friend of mine recently told me that I had no idea how hard it is being a girl," Erakat explained in the video. "Because when she wears leggings, everybody stares at her butt. So today, I'm going to find out exactly how hard it is."

Head buried in the trunk of his car with his derriere in plain sight, Erakat waited for passerby with hidden cameras rolling.

Each time Erakat caught someone in the ogling act, he'd pop up with a question: Were you staring at my butt?

Expecting a woman's face to appear, the men Erakat encounters generally appear embarrassed — if not outright betrayed — by the reveal.

"I can't do nothing with that bro," one unhappy observer said, refusing Youseff's offer of "a piece of this."

"Are you trying to call me gay or something? Why the F*** you got on leggings, dude?" another guy yelps.

While Erakat was originally hoping to expose a bit of casual sexism, his junk-in-the-trunk experiment elicited an unfortunate bonus: homophobia. In several instances, the men Erakat pranks become aggressive after discovering the ruse.

Erakat shouldn't go around assuming every dude on the street is a homophobic straight guy, out to gawk at women's behinds. While the viral video is admittedly hilarious, it's important to remember the behavior it mocks is the opposite of funny. Unwanted sexual attention may seem humorous when viewed through the lens of this male prankster. However, his problem ends when the pants come off. Many women have to deal with this type of harassment on a continuous basis.