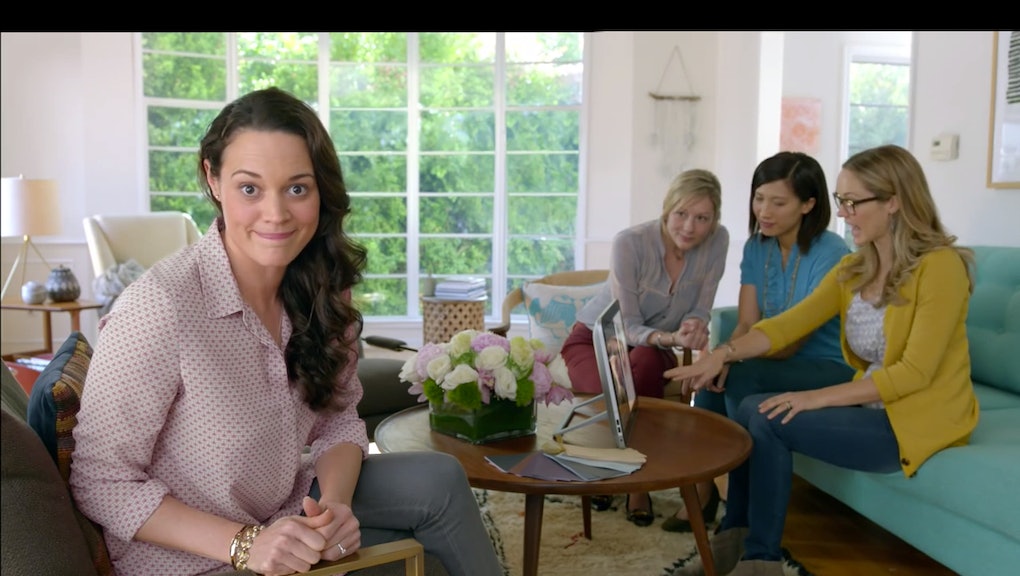 Dear Microsoft, Women Use Computers for Things Other Than Wedding Planning

"It's perfect for planning my wedding," a white, blouse-clad brunette gushes in the 30-second spot. "The 20-inch touch screen makes it easy for my friends to check Pinterest, search for the wedding band and share their ideas!"

Microsoft's sexist ad is the latest in a deluge of tech commercials that stereotype and/or patronize women. Another Microsoft ad, released last month, shows a mother buying a laptop to keep her squabbling kids occupied. It's commendable that tech companies want to appeal to women — after all, they constitute roughly half of the population and are leading men in tech adoption rates. Of course, some of those women are moms and wives. But whether they happen to be moms, wives, teenagers or working professionals, women are also smart, professional, tech-savvy people and it's about time these companies caught on.

Microsoft is by no means the only offender in this unfortunate cycle. In 2009, Dell launched a website targeted at women, Della, that offered cutely-colored accessories and advised women how to use their laptops to find recipes, organize meditation groups and track calories. Because clearly the only reason you'd want a Dell is to look up the latest knitting pattern. (No offense to online knitting patterns.)

In May 2013, a Google ad for Gmail showed a woman using the Internet to buy shoes, cancel a knitting evening with her friend and line up a date. And just a few months earlier, Samsung unveiled the Galaxy S IV with the help of some giggling women who extolled the phone's touchless capabilities because they had wet nails, were applying sunscreen or didn't want to put down their drink. "My mother always dreamed I'd end up with a doctor — I bet she didn't imagine this," one says.

That tech companies generally can't seem to cater to women without being condescending is just bad business. Women are more active online, according to the latest Pew research, with 78% of women plugged in to social networking sites compared to 69% of men — and they're not all browsing for bridesmaid dresses on Pinterest.

So why do tech companies insist on sexist marketing? The problem may lie in the testosterone-fueled marketing suites of Silicon Valley. Although tech firms are hiring more women, it's still very much a man's world. Only 3% of startups have female founders, and one third of science, engineering and tech companies don't think a woman would make it to the top seat in their boardroom. Although women occupy 57% of the American workforce, they hold just 25% of computing jobs, and the number of women pursuing computer science degrees actually halved between 1985 and 2010. Sheryl Sandbergs and Marissa Mayers aside, the tech world is dominated by men. They seem to have figured out that a large chunk of their consumers are women. They just don't know how to talk to them. This has a massive knock-on effect, because it doesn't exactly paint a welcoming picture for women in Silicon Valley.

To be fair, other ads in Microsoft's "Honestly" campaign haven't been as bad as this bride-to-be example. One shows a female editor of a tech blog who's a self-professed geek, while another features a female paramedic who uses her laptop for pre-med classes and gaming.

But Microsoft still gets its wrong too often. When it released the Xbox One in November, the tech giant published a letter on its website from men to their girlfriends. It reads, "Hey honey, Not sure if you’ve heard, but Xbox One is now available. That means we can start playing games like Dead Rising 3. I know, I know. You’d rather knit than watch me slay zombies." Seeing as 45% of gamers are women, and 0% of women like to be patronized, this campaign unsurprisingly failed to impress.

Microsoft is one of the world's most prominent companies; it's worth almost $319 billion and actually has an above-average representation of women in its upper echelons. Honestly, Microsoft. Let's see you be brave.