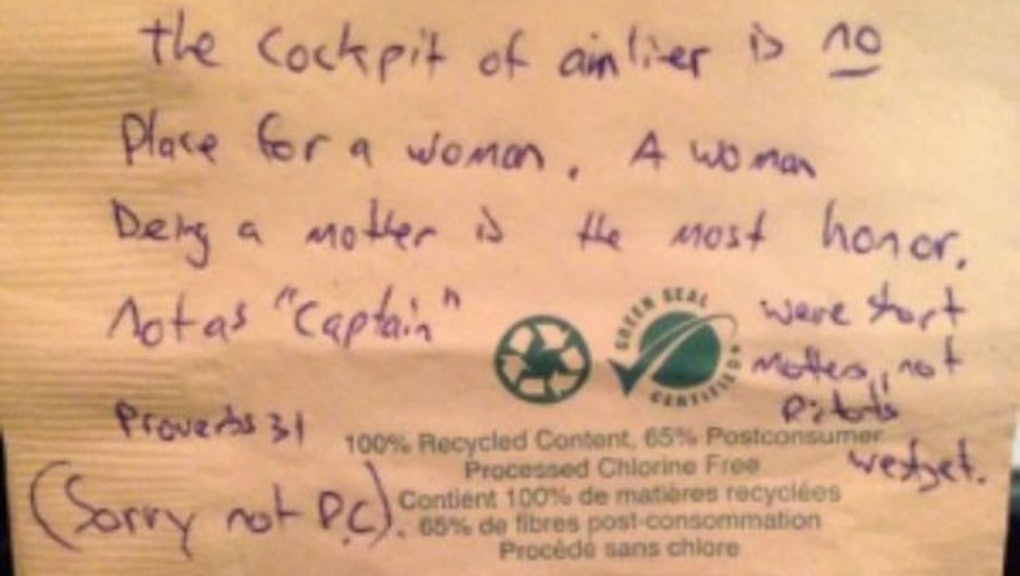 Wait, is this guy serious?

The female pilot of a WestJet flight from Calgary to Victoria used social media to respond to a sexist note that she believes a male passenger left for her recently on an airline napkin.

Capt. Carey Smith Steacy posted the following photo of the unsolicited tidbit to her Facebook page:

Steacy took the high road following the incident, penning a note that should be required reading for young girls everywhere.

I respectfully disagree with your opinion that the 'cockpit,' (we now call it the flight deck as no cocks are required), is no place for a lady. In fact, there are no places that are not for ladies anymore.

Do the sentiments expressed by passenger "David" seem archaic to you? That's because they are. In fact, women have been playing for close to a century. In 1973, Bonnie Tiburzi made history when she was hired by American Airlines, the first female pilot employed by a major airline.

While WestJet told CBC News that it did not want dignify the passenger's note with a formal response, a spokesman pointed out that the airline has employed female captains and first officers among its pilots since launching in 1996. However, women are still solidly in the minority — of 1,176 pilots, only 58 are women.

In essence, while women have made gains in this generally male-dominated industry, they are still underrepresented. In fact, the percentage of female pilots has changed very little since the 1980s, according to the Institute for Women Of Aviation Worldwide.

Even though there are now women working in basically every job sector these days, it's also true that women continue to be the minority in leadership positions, and they're paid 81% of what men are given, with fewer opportunities to advance.

Meanwhile, women, particularly immigrants and women of color, still dominate in caretaking positions, such as domestic work, nursing and teaching — demonstrating a sticky public perceptions of what "female work" looks like, even as the societal definition of "men's work" is becoming increasingly fuzzy.

"A woman being a mother is the most honor," the Bible-thumping WestJet passenger allegedly wrote. That view, though seemingly outlandish these days, is actually still the perception across much of the world — and the numbers back it up. So thank you, David, for giving us something to think on the eve of International Women's Day.