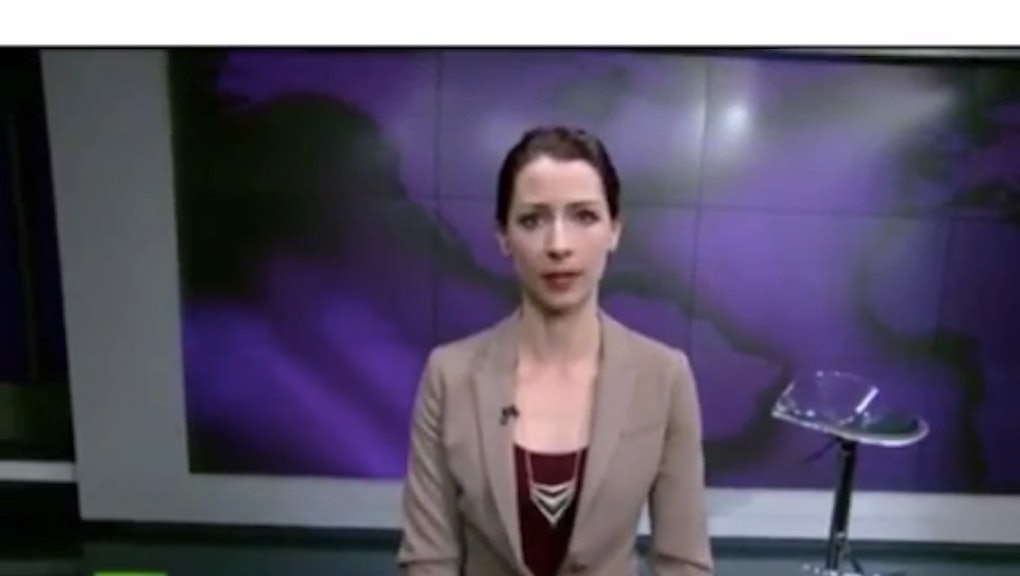 The news: Since the beginning of the conflict in Ukraine, news channel RT has been roundly criticized for its rosy coverage, which critics have described as "propaganda." The channel is funded by state money, and as such, is considered a Kremlin mouthpiece — that is, until one of its anchors went spectacularly off-script.

On Monday, RT's Breaking the Set host Abby Martin, an American journalist based in Washington, ended her show by saying something "from [her] heart about the ongoing political crisis in Ukraine and Russia's military occupation of Crimea." What followed was a short monologue that may have surprised the channel's mostly pro-Russian viewers:

"Just because I work here, for RT, doesn't mean I don't have editorial independence, and I can't stress enough how strongly I am against any military intervention in sovereign nations' affairs. What Russia did is wrong," said Martin, shaking her papers with emphasis. "I will not sit here and apologize or defend military aggression."

What happened next? After the segment went viral, the National Journal reached out to RT headquarters to see if there were any consequences for Martin's off-script comments. "Contrary to the popular opinion, RT doesn't beat its journalists into submission, and they are free to express their own opinions, not just in private but on the air. This is the case with Abby's commentary on the Ukraine. We respect her views, and the views of all our journalists, presenters and program hosts, and there will be absolutely no reprimands made against Ms. Martin," the press office wrote in an email.

The statement also added that the channel will send Martin to Crimea "to give her an opportunity to make up her own mind from the epicenter of the story," which Martin has denied on Twitter:

Going forward. Reporters Without Borders previously described RT as a "step of the state to control information." The network has been criticized for its soft coverage of protests and human rights issues, such as the Pussy Riot controversy.

But in his praise of Martin's stance, journalist Glenn Greenwald made the argument that American media's coverage of the Iraq War was similarly soft, and that journalists who spoke out in protest back then — isuch as MSNBC host Phil Donahue and NBC correspondent Peter Arnett — were quickly fired by their networks. RT may be a cheerleader for its country's wartime efforts, but it's certainly not the only one.