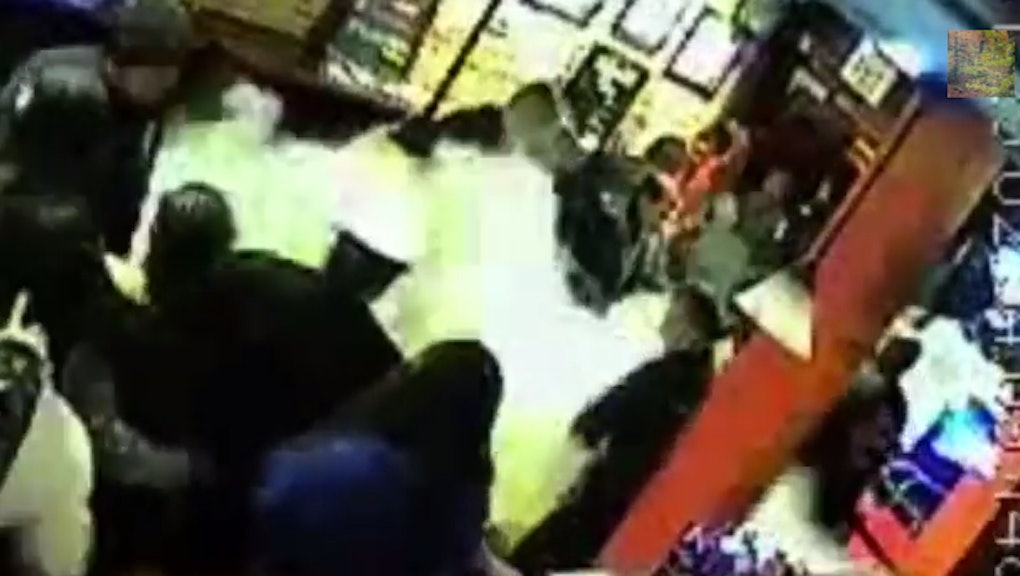 When you think police brutality, you might think of protesters, riot police, SWAT teams and big cities like New York or Los Angeles. But the small city of Troy, NY, has a pretty big problem of its own.

Police brutality is a systemic problem across the United States, and few places are immune. In Central New Jersey, 99% of all complaints go uninvestigated. According to data from TERM Life Insurance from April 2009 to June 2010, 5,986 incidents of misconduct were recorded across the country, resulting in 382 fatalities and nearly $350 million in settlements. But the cops were left largely unpunished. Just a handful were convicted, and even fewer served prison time.

That's just counting the reported incidents of police brutality. According to NBC, the nation's 17,000 law enforcement agencies set their own terms for excessive force and brutality, resulting in a "free-wheeling space" where the cops can easily justify their own misconduct. Because of this, "Courts spit out wildly inconsistent results."

For a clear example, check out the bar fight that erupted in Troy on Jan. 25, when officers stormed Kokopellis bar in the city of just 50,000 (footage of the incident begins around one minute):

Few dispute that the officers had a right to enter the establishment. They had already been called twice that evening, once after bar employees smelled marijuana, and again when patrons were observed smoking pot and a bouncer was assaulted in the ensuing closure of the bar. But the situation quickly escalated and got very ugly when the Troy Police Department arrived, with multiple patrons assaulted and eight people arrested.

Community advocate Ben Brucato says that what was captured in the video was "caused by police, escalated by police and resulted in numerous injuries and bogus criminal charges against civilians." The bar's owners say that by the time police arrived, everyone in the establishment was finishing their drinks, clearing their tabs, getting coats or otherwise preparing to leave Kokopellis. Assistance was no longer required to resolve the situation.

But people present appeared to either offend the officers or respond slower than desired to their commands, prompting one cop to punch a patron. Soon thereafter, multiple officers began striking citizens with batons. Someone — likely a customer or staff member — momentarily pacified the situation by activating a fire extinguisher, a questionable move which nonetheless allowed patrons to vacate the bar. Soon thereafter, resident Roshawon Donley, injured in the previous confrontation, found himself being detained and beaten with batons on the ground.

The Department of Justice considers using a baton to strike a suspect's head or torso "deadly force," the same as firing a handgun or ramming them with a car. According to Brucato, the only time such force is authorized under the DOJ's guidelines is when "an officer or civilian has a immediate risk of death or severe bodily injury." In the tapes, nothing can be seen that justifies the level of force used by Troy officers. A stressful, hard-to-manage situation? Certainly. But lethal? Hardly.

Owners Barry and Joseph Glick claim that Troy Police Department officers have subsequently harassed their business by parking cruisers outside the bar almost every night, scaring away potential clientele. While incidents like these are rarely clear-cut, involving improper escalation of the situation from both sides, they become brutality incidents when they culminate in the improper or excessive use of force by authorities. And the Troy Police Department has a questionable record when it comes to their interactions with citizens, according to a list provided by Brucato:

In 2010, Troy officers were beating a resident named Shakim Miller when another officer beat another man named James Foley for recording the incident, resulting in a $90,000 settlement against the city. In 2011, John Larkins was thrown to the ground, tasered and pepper sprayed while cuffed inside a police cruiser after a false arrest at a hospital that was later acquitted. A 2012 incident over a Facebook fight between a Troy Police Department member and a man named Brian Houle resulted in the latter being assaulted in his home by the officer. And even more recently, Lawrence Nesmith was beaten in a Troy Police Department holding cell in 2013. Authorities defended the action despite community demand for further investigation.

The DOJ and the FBI are investigating allegations that Troy's Police Department regularly uses excessive force and civil rights violations in their handling of cases, including the Kokopellis bar fight and the above four incidents. But even if the DOJ decides to pursue further action against the city of Troy, broader changes will remain hard to come by.

Without a nationwide policy to crack down on police brutality and protect citizens against excessive force, it will just be one more isolated incident.