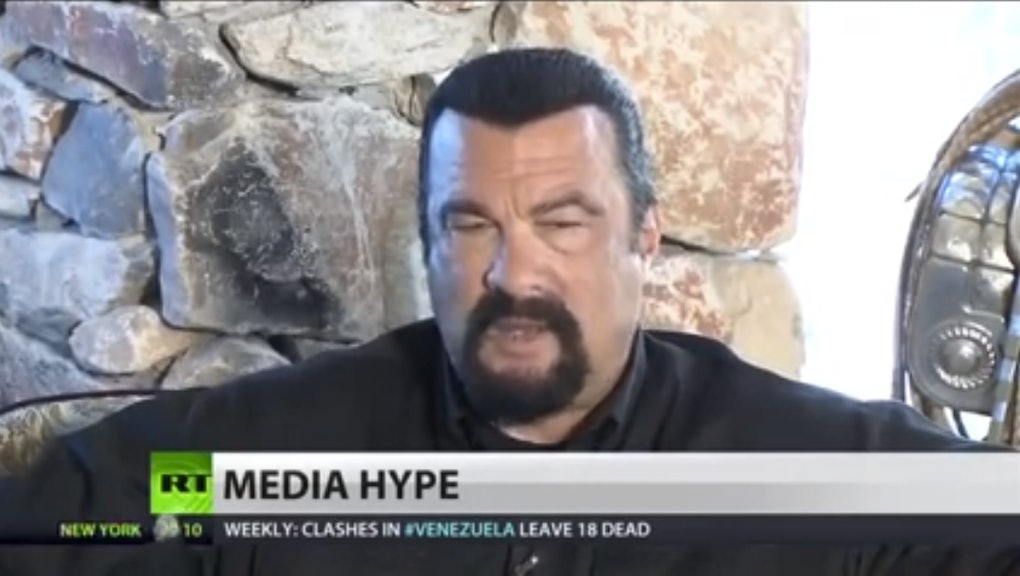 RT, the Kremlin-funded mouthpiece of Vladimir Putin and quasi-official news organization from Russia, has a weird obsession with Steven Seagal. While I could fill a book with the shear amount of stupidity that has been said on RT in general since its founding, let's stick to the six dumbest things that Seagal has said so far:

When recently asked about the ongoing situation between Russia and Ukraine, Seagal said:

Get this through your head, Stevie: Nobody cares what you think about Ukraine. You're not an expert on the region, nor are you a foreign policy wonk. And how have you been trying to avoid it? Are you going to kill a voodoo practicing drug kingpin named Screwface by throwing him down an elevator shaft? Because that would actually be pretty cool.

2. Seagal as an “expert on security”

When asked by RT about the security situation at Sochi for the Olympic games, Seagal said:"I think you can never be too careful, there is no such thing as, you know, 100% guarantee of, you know, absolute safety anywhere in the world, wherever you go."

Well said, mush mouth. Seagal is an actor, martial artist and deputy sheriff that drove a tank through someone's home and killed a puppy by accident. He is not a security expert, and RT must be absolutely starved for ratings if the best they can muster up is an over-the-hill movie star who's starting to resemble one of the California Raisins.

Have you had your douche chill moment yet today? Let me help you out: Start at about 1:20, and don't forget to listen for his disgusting snot snort about two seconds after.

4. On the Russia-U.S. relationship

In an obnoxiously long interview with RT's Oksana Boyko, Seagal can barely keep his attention focused on her. He looks around the room as though he's expecting someone to attack him, and he makes lots of uncomfortable pauses. But none of that compares to his statements about his "mission" in life:

“The only way to really create world balance and world power, and peace in the world, is if America and Russia become brothers and best friends. And that’s my mission in life; is to get better relationships between Russian and America and keep them good.”

Apparently his time as a movie star, martial artist and service as a deputy sheriff all play second fiddle to his heroic mission to help Russia and the U.S. bro-out. Although I'd argue that things like energy security, deeply-rooted cultural and ethnic tensions and cold war dynamics may play a slightly larger role than Seagal, I've been wrong before.

Seagal said: "How about telling the truth? Didn't Georgia attack Russia, and didn't Russia retaliate? Isn't that the truth? Maybe people should either do their homework, or stop just, ya know, saying what they're told to say?"

Oh … my … God. If Seagal had done his homework, he would have made less of an ass out of himself. Georgia attacked South Ossetia, a territory that is quasi-recognized as an independent state which Russia was defending. Once a few shots were fired, Russia marched all the way to Tbilisi, the Georgian capital.

Let's be honest, Steven. Oh wait, you lie a lot. Like that time you fought the Yakuza with the assistance of the American mob, or when you helped train CIA operatives and did them "special" favors.

6. His bromance with Putin

Does this one need an explanation? Do we really need to talk about Putin's time in the KGB, his abuse of power, his corrupt government, his thuggish attitude and the time he made fun of George W. Bush's dog?