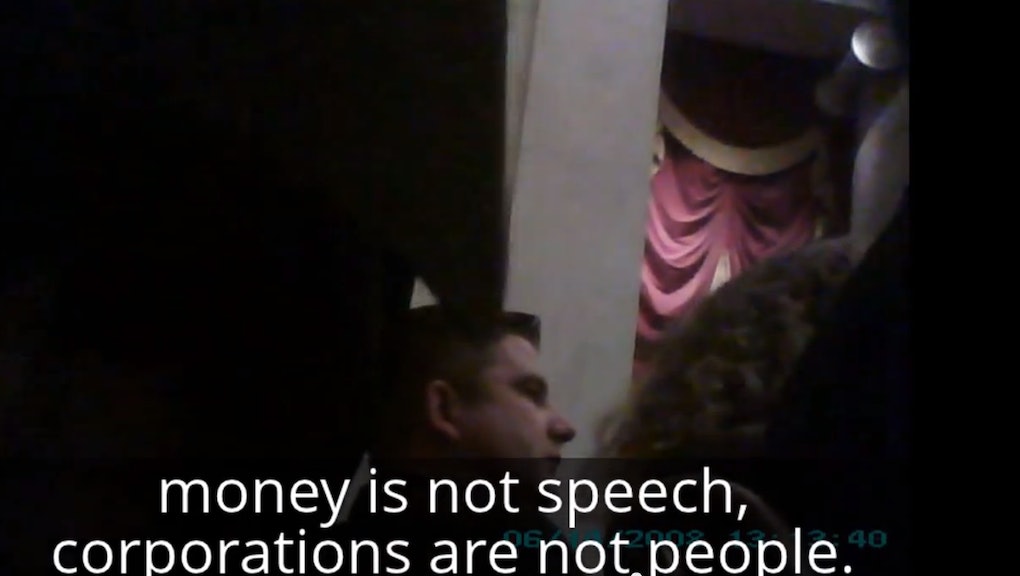 Regular observers of Supreme Court hearings noticed new security measures as they arrived at America's highest court on Monday. They were instructed to remove their belts. New, brighter lamps had been installed at the second security outpost visitors are required to pass through. Before court began, the bailiff asked those seated in the court's pews to notify security if they spotted any suspicious activity.

The new measures were instituted after a rare disruption to proceedings took place last week. Justices were hearing oral arguments in a patent case when Noah Kai Newkirk, a 33-year-old California native, stood up and made an oral argument of his own.

"I rise on behalf of the vast majority of the American people," Newkirk told justices in a loud, phlegmatic voice. "[M]oney is not speech, corporations are not people and our democracy should not be for sale to the highest bidder."

Furthermore, the incident was caught on video and SCOTUS rules forbid electronic equipment from entering the courtroom. The public has never seen video of the justices holding court. Interruptions to Supreme Court proceedings are extremely rare, the last notable instance being the 1983 ejection of publisher Larry Flynt from the courtroom.

A New York Times article on proceedings that day neglected to mention the rare disruption, but there was Newkirk on YouTube that evening, making his declaration not only to the justices but to the world-at-large in footage likely shot with a camera pen or a similar covert recording device.

The activist group 99Rise, which Newkirk co-founded, posted a message on its website, stating that Newkirk and those who filmed the disruption were "inspired to act" by the Supreme Court's 2010 Citizens United v. the Federal Elections Commission (FEC) decision that in a 5-4 ruling "demolished the wall of separation between wealth and state."

Citizens United v. FEC gave First Amendment rights of free speech to corporations. It defined money as a form of speech and, by extension, lifted limits on the amount corporations can spend advocating for their preferred candidates so long as the donations go to organizations that are not in communication with said candidate, which is often a blurry line.

The impact of the ruling was almost immediately felt. Spending in the 2012 election cycle tripled that of 2008, topping $1 billion. Money poured into tax-designated 501(c)(4) "social welfare" organizations and manifested itself in the form of prime-time attack ads.

Citizens United also applies (not sure about this word?) to unions, but they have much smaller treasure troves than corporations, which have habitually outspent labor by a ratio of 15 to 1 in recent election cycles.

Newkirk and 99Rise are worried that a suit brought by Coalmont Electrical Development CEO Shaun McCutcheon (McCutcheon v. FEC), which the court is currently weighing, will go a step further and remove limits on what individuals can spend on elections and the number of candidates to which they can donate.

"Keep a cap on McCutcheon," Newkirk said in the video before he is seized by security personnel. "We demand democracy."

At the Huffington Post, Liz Kennedy, with the left-leaning think tank Demos, wrote that Newkirk's speech "reminds us how cut off the Supreme Court is from the life of the country." But while SCOTUS might have sealed itself away in a no-tech tomb, not all justices are immune from the temptations and influences of the outside world.

Both Clarence Thomas and Antonin Scalia, for example, have shady ties to the corporate interests that they rule on.

Citizens United, the group that brought the donations case to the Supreme Court, actually ran television ads in 1991 supporting Thomas' nomination as a justice amidst highly contentious Senate hearings where Thomas was accused of sexual harassment. Thomas called the attack ads against Democratic senators seeking to block his appointment vicious at the time, but two months before the court ruled on the Citizens United case, Thomas' wife, Virginia, started a 501(c)(4) political advocacy group of her own, Tea Tarty-affiliated Liberty Central.

Two years before the Citizens ruling, Thomas and Scalia were paid to attend a four-day retreat hosted by billionaires Charles and David Koch, principle owners of Koch Industries. The Koch-funded Cato Institute also filed an amicus brief in the case. Thanks in part to the two justices, the Koch brothers were able to funnel hundreds of millions into 2012 election campaigns.

The nonpartisan campaign finance reform group Common Cause wrote a letter to the Department of Justice asking them to investigate the pair's conflict of interests in 2011. So far, no response. With one arm of law washing the other, corporations using money to dominate political discourse acts of civil disobedience might just be the only option left for citizens who want their voices heard.

But for Newkirk, at least, it has come with a cost. He faces upward of 60 days imprisonment for violating a federal law against "speeches, and objectionable language in the Supreme Court Building and grounds."