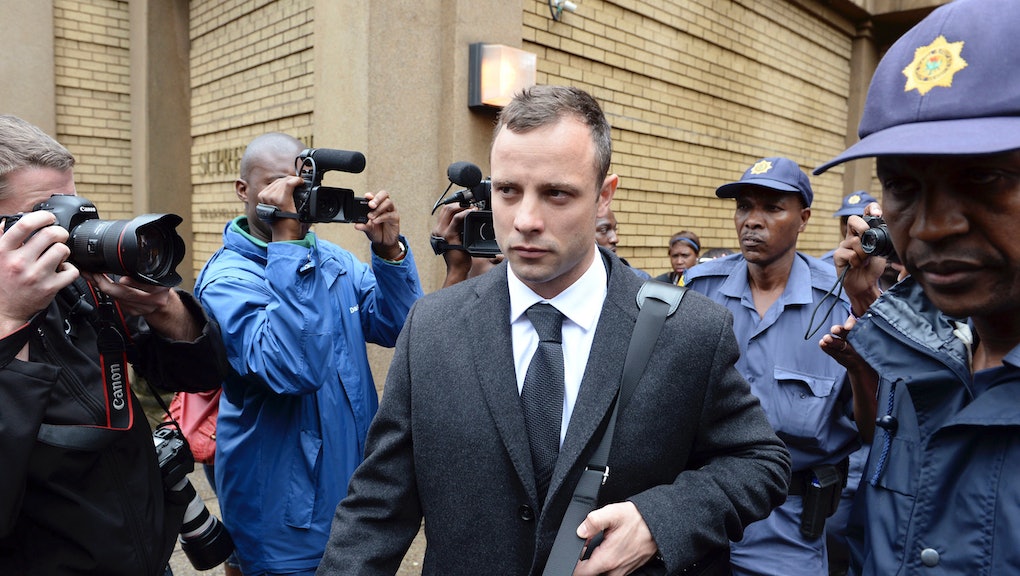 It's South Africa's O.J. Simpson trial: the court case of world-famous Olympian and double amputee Oscar Pistorius' opened this week over charges the runner murdered his girlfriend in cold blood on Valentine's Day in 2013.

Just as Simpson's criminal saga froze Americans in front of their televisions in the 1990s, Pistorius' story has captured headlines in Africa's wealthiest and most influential country for over a year.

Both sides agree on the facts of the case: Early on the morning of Febr. 14, 2013, Pistorius shot Reeva Steenkamp, a model and law school graduate, four times through the locked bathroom door in their upscale, gated home in Pretoria.

The defense team of the man known as "blade runner" insists their client believed an intruder was in the home and fired in self defense. But prosecutors say the murder was premeditated and may have stemmed from Pistorius' jealousy over Steenkamp's texts with a reported ex, who's also close friends with Pistorius.

Neither version is palatable to South Africans. Either Pistorius reflects a fearful, unstable society where whites lock themselves in their homes with guns, or his actions are symptomatic of a country where every day seven women are murdered, almost always by men.

During his rapid ascent to fame, Pistorius became an emblem of South African pride, rising against great odds to achieve what he had been told was impossible. It was a potent metaphor and made for good copy.

But now, by the same token, his fall serves as a stinging allegory of the post-apartheid political class, so full of hope but ultimately disappointing and now without the fig leaf that Nelson Mandela provided during his twilight years.

In the U.S., Simpson's trial came less than three years after the Los Angeles riots left more than 50 dead and re-inflamed questions over race. Amidst a divisive war on drugs and epidemic squalor in American cities, Simpson, the genial Football Hall of Fame running back, was the kind of crossover celebrity of film and field that went down easy.

But Pistorius' trial stands apart. At the time of his arrest, he was likely even more famous than Simpson in his heyday, known to viewers worldwide for the futuristic carbon-fiber blades that propelled him to the finish line in the London Olympics, just months before he killed Steenkamp.

For international audiences, the story is a salacious, bloody soap opera, but for South Africans it opens wounds that were only lightly sutured by Pistorius' inspirational story.

Before he became a famous track star, Pistorius grew up in a wealthy mining family and enjoyed privileges that few South Africans, especially blacks, ever see.

Despite the 1996 Truth and Reconciliation Commission and other efforts to address the legacy of apartheid, South Africa remains one of the most unequal countries in the world. Many whites live in secluded, heavily-secured compounds, far from the poverty of black townships that saw the birth of the African National Congress and the anti-apartheid movement.

Some, like Pistorius, find it necessary to arm themselves to the teeth in preparation for proverbial black bogeyman out to rob or kill them in the night. Like in America, fear serves as an excuse for murder, and like in America, panic and isolation become self-perpetuating. One study of American gun deaths found that a weapon in a home was "twelve times more likely to result in the death of a household member or visitor than intruder."

After Steenkamp's death, a disturbing, almost cartoonish picture of her killer emerged. A friend of Pistorius' told reporters he kept "boxes and boxes" of steroids in his home. Another recalled an incident at a Johannesburg restaurant one month prior to the killing when Pistorius accidentally discharged a handgun, then asked a companion to take the blame. Another time he apparently shot through the sunroof of his car.

Clearly, not all white South Africans are hopped up on drugs and running around with guns. For many, the story is a distraction from the inequality and struggle for democracy in what has become a one-party state by way of complacency, where affirmative action has only led to a moneyed and well-connected African class, known disdainfully as "Black Diamonds"

And now, as Pistorius' court case plays out before the world, South Africans are upset over journalists parachuting into the country and portraying the proceedings as the "trial of the century," as if Mandela's Rivonia court case never occurred. But maybe the point is that is the reality South Africa finds itself in, four months after Mandela's death. Things never were going well.

"I find it alarming that, despite the richness and the complexity of this country's two-decade-old attempt to build a democracy, the only issue you want to discuss with me is a rather tawdry criminal trial. I am horrified by this misplaced sense of priorities and have no wish to be a part of it."