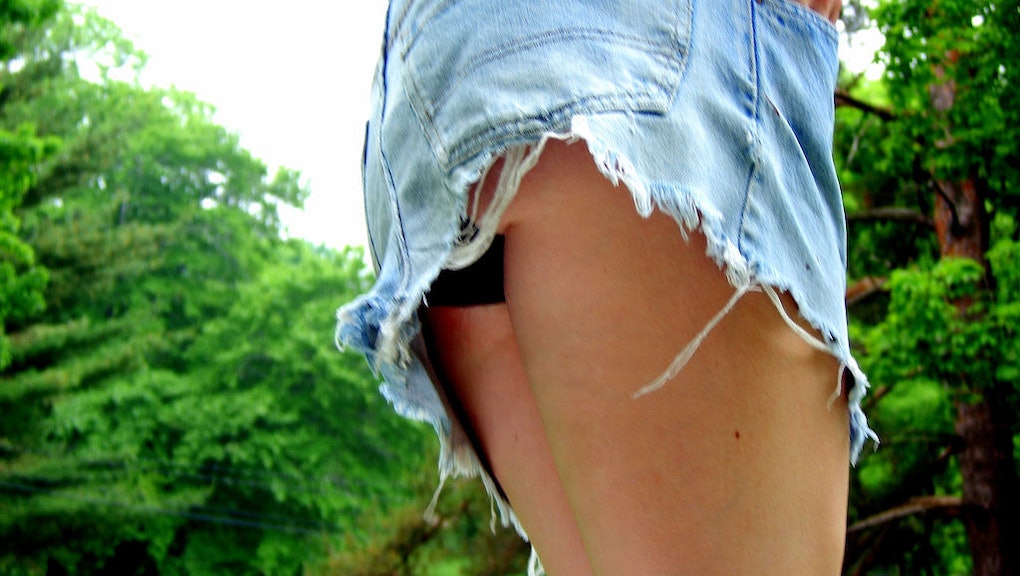 Ladies of Boston, beware. Massachusetts' highest court has ruled that if a man wants to stick a camera up your skirt and take photos, without your knowledge or permission, he's within his rights to do so.

Let's back up a little.

Michael Robertson was arrested in 2010 after he was caught taking sneaky photos and videos up women's skirts on the Boston subway, a widespread voyeuristic endeavour known as "upskirting." His defense argued that the act was an expression of free speech, and this week, Massachusetts' Supreme Judicial Court agreed.

Apparently, if a man goes out of his way to take an oddly angled photo up a woman's skirt — a skirt that she put there for the very purpose of covering what is underneath it — he's not doing anything wrong because she's taken her skirt and its contents to a public space and can't hold much expectation of privacy.

The laws against voyeurism prohibit knowingly recording by any means the "private area of an individual, without that individual's consent, under circumstances in which that individual has a reasonable expectation of privacy."

And therein lies the rub. A woman wearing a skirt in a mall or on a subway platform can't expect men not to get down on their knees and look up her skirt because she's standing in a public place. And you can forget about the woman who has to climb stairs or bend over to pick something up.

The Massachusetts judgment said a woman who is wearing a dress or a skirt "is not a person who is 'partially nude,' no matter what is or is not underneath the skirt by way of underwear of other clothing," and so is not protected by the laws against voyeurism. You'd think that the point of wearing clothing is to establish privacy over what lurks underneath. Seemingly, you'd be wrong.

Peeping Toms are by no means a new phenomenon, but the age of iPhones and the Internet has fueled the spread of this form of female objectification by making it easier for people to take unsuspecting photos and by creating a community whereby these invasive images can be demanded and shared. To be sure, women's magazines and gossip sites that splash lurid upskirt shots of female celebrities as they climb out of cars and sit at restaurants aren't blameless, either.

But both iPhones and the Internet have been around for some time now, and it's about time legislators caught up. Despite repeat offenses in the last decade, which judges have deemed "disgusting" and "reprehensible" yet legal, the law has failed to keep up with a distasteful and damaging trend that technology has turned into a mass problem.

This 2004 article suspects that "it wouldn't be an exaggeration to suggest that tens of thousands of women are unknowingly appearing on pornographic websites" after being unwittingly photographed. And that was 10 years ago — before camera phones and Wi-Fi became basic commodities. Imagine the numbers now.

For once, it appears citizens and politicians are on the same page, however. Women were quick to voice publicly their displeasure over the ruling.

"We have fought too hard and too long for women's rights to take the step backward," Murray said in a statement. "I am in disbelief that the courts would come to this kind of decision and outraged at what it means for women's privacy and public safety."