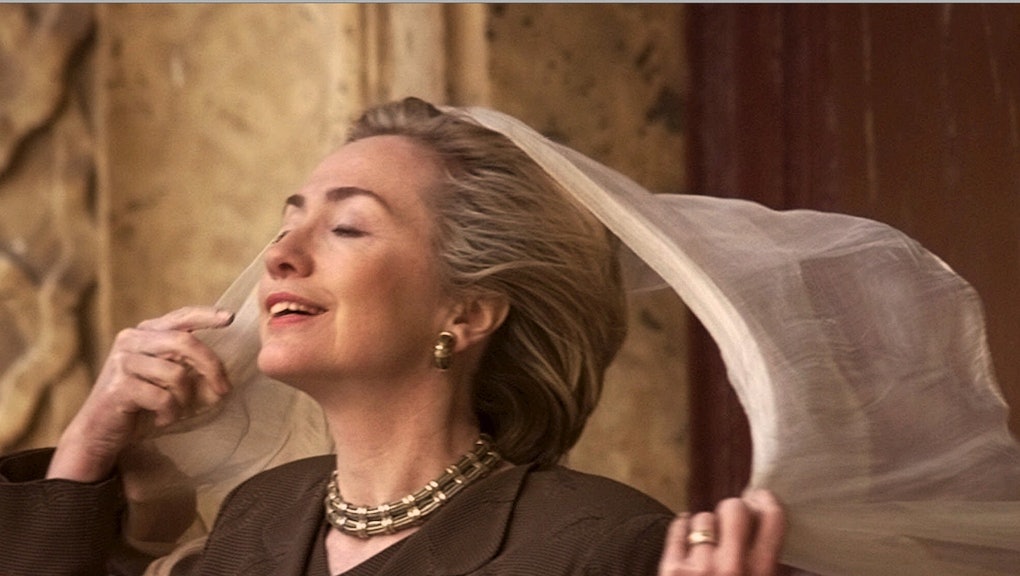 Many Republicans rubbed their hands with glee in anticipation of the so-called "secret Clinton files" in the hopes that the documents would reveal some nasty information about the Democratic Party's current front-runner, Hillary Clinton. But while some conservative outlets like Fox News went out of their way to spin an unflattering narrative, a closer look at the trove of mid-'90s documents shows that the first lady's staffers had an inkling that their boss had bigger and brighter things ahead of her.

The old-school correspondences offer some delightful gems, such as the the "wild idea" of having the then-first lady appear on a popular sitcom like Home Improvement (I'm sorry, why didn't this happen!?). But they also include much more prescient nuggets, including the suggestion Clinton should recognize and embrace new digital technologies.

In one memo, former press secretary Lisa Caputo stressed the importance of "women's media" and how Hillary should "own it." Further, Caputo suggested that "Hillary could speak to young women through Internet," a concept that Clinton has mastered rather impressively over the past few years (although we know call it "the" Internet).

Nearly 20 years old, these newly unearthed emails are remarkable for their foresight. Although a much smaller part of the communications strategy in 1995, today the Internet hasn't just allowed female politicians to correspond with young women, it has also provided them with a whole new way to do politics. And no politician has been able to capitalize on this opportunity the way Clinton has.

A former lightning rod for conservative criticism, Clinton has come a long way since her husband's sex scandal rocked the world. In the decades since, Clinton has been able to influence public perception through her strategic use of social media.

The viral meme Texts from Hillary is a perfect example of Clinton's handle on the medium, embracing a clever phenomenon that combined her professional status with a snarky sense of humor. This is the power of social media harnessed for image control. Why let the mainstream media control your personal narrative if you can tell it yourself over Facebook and Twitter?

Other examples of Clinton's social media acumen include her widely shared tweets, like this one that "won the social media Super Bowl" this year. Although Barack Obama won the battle in 2008, Hillary Clinton definitely won the (social media) war.

It's worth pointing out that Clinton isn't the only female politician who's increased her influence in the virtual world since 2008. Other women who have used the twittersphere to their advantage include Texas State Sen. Wendy Davis (148,000), Sen. Kirsten Gillibrand (D-N.Y.) (102,000), Rep. Nancy Pelosi (D-Calif.) (461,000), Rep. Michele Bachmann (R-Minn.) (214,000) and Sarah Palin (1.04 million). Across America and on both sides of the aisle, female candidates are building loyal followings and changing the game of politics.

Although this trend could be due to a number of factors, it coincides neatly with a hike in the proportion of female social media users. The latest data shows that as our world becomes increasingly social, the gender gap for users is becoming more prominent. Today, more than 74% of women are users of social media, (compared with only 62% of men). And as growing social media sites like Pinterest attract far more women than men, it's really no surprise that much of the conversation on these platforms is driven by women.

Even when both genders use social media, research suggests women are using it much more avidly, building more connections and sharing more content. Women are more likely to be heavy users and "more intense contributors of content on Facebook than are men." This may be because women tend to use social media sites like Facebook collaboratively, while men often rely on them for individual purposes like gathering information or increasing their status.

Female domination of social networking is also having ripples effects in the consumption of mainstream and alternative media. On many political websites, female readership is starting to outnumber male readership. According to the analytics website Alexa.com, the BBC, the Blaze, Gawker, the New York Times, TIME, the Huffington Post, Fox News,  Buzzfeed,and even here at PolicyMic, all have more female readers than male.

The fact that women make up the majority of readers and sharers online is feminizing politics, a realm that has traditionally been male dominated. Facebook users, the majority of whom are women, are more politically engaged than the rest of the population and 78% more likely to influence their friends to vote.

Women are especially likely to promote their favorite politicians on social media, and politicians are increasingly trying to cater to them.

"I've seen women, in general, raising more money online across the board and really utilizing social media as a tool," Jessica Ehrlich, the Democratic candidate in 2012 for Florida's 13th Congressional district told PolicyMic. "Although female donors tend to give less than men, they are willing to spread a candidate's message on social media, which ultimately translates into more support at the ballot box."

Although this shift doesn't mean that sexism has been totally eradicated from politics, it does mean that offensive comments that were acceptable prior to the social media takeover will likely be much harder to get away with next election cycle.

As Jessica Valenti pointed out in her piece for the Washington Post, female politicians are just now starting to reap the benefits of the overt sexism that once plagued them. In the early '90s, Clinton was the butt of more late-night comedy jokes than any other personality living or dead. Jokes about her being a "nutcracker" and her "cankles" were all comedians could talk about. Her approval ratings were going down the drain. She became an especially polarizing figure amongst men, who viewed the first lady much less favorably than women.

Now we're starting to see a reversal of this trend. When the infamously misogynistic "Slap-Hillary" was introduced by an anti-Clinton super PAC a couple of months ago, it didn't damage her — it helped her garner more support. Ready for Hillary, a pro-Clinton PAC, actually saw their Web traffic and donations increase by a whopping 40% after the game came out.

In an attempt to avoid further gaffes, Republicans have started organizing pre-emptive sensitivity trainings for male candidates running in elections to make sure they don't repeat the mistakes of their predecessors. Given that the majority of voters are female, it's no surprise that they are finally coming around to the idea that this is a demographic (ahem, THE demographic) they should be concerned with. Clinton's aides may have predicted the importance of the Internet to reach young women, but they would probably be shocked to find out that women have become such an important demographic with the potential to determine the fate of an election.

"An advantage that female politicians have is voters tend to trust them more easily than their male counterparts. Social media can amplify that trust. It gives voters the feeling of a direct connection with the real authentic you," she explained to PolicyMic.

The Clinton files reference the need to "humanize" Hillary, and social media certainly helped her accomplish that. Whether it was Texts from Hillary, the photo collection of her getting down on the dance floor or her mansplainer GIF-guide going viral, the politician's human side has been able to shine through social media.

So could aides have predicted that "Internet" would become the most significant medium to reach young women? Maybe. Could they have foreseen that it would be instrumental to Clinton's comeback? Perhaps. Could they have known that a picture of her on an upgraded Palm Pilot from the future would help solidify her chances of becoming the first female president in history? Probably not.

A lot has changed since those memos were written in the '90s. Female voters, who were often ignored, have now become a pivotal demographic and their growing influence online will help them harness more of it.

I'm sure Clinton's aides would be happily surprised to know that their boss is owning "Internet," but no one tell them that Home Improvement got canceled. That — could be the biggest shock.