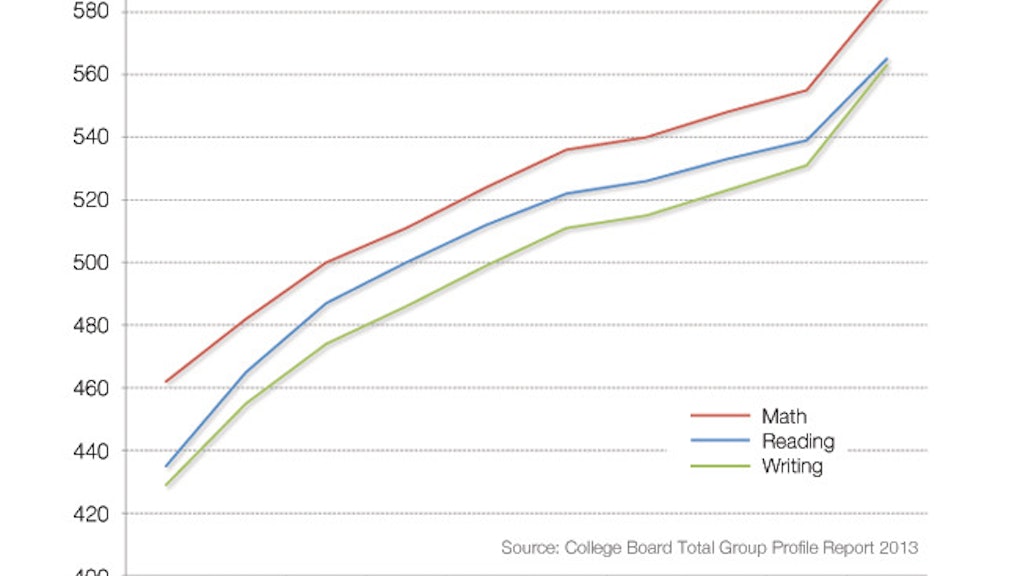 On Wednesday, College Board announced its second-ever overhaul of the SAT exam, and some of the changes are pretty drastic.

By 2016, the scoring will revert back to the "out-of-1600" format, and the essay section will become optional. Students will no longer be penalized for incorrect answers. There will be less emphasis on obscure vocabulary and more on evidence-based reasoning. Reading passages will come from well-known texts, such as the Gettysburg Address or the "I Have a Dream" speech. There will be fewer math topics and more in-depth questions (and calculator bans on certain sections). And perhaps most importantly of all, the test will be offered both in print and digitally.

"No longer will it be good enough to focus on tricks and trying to eliminate answer choices," said College Board CEO David Coleman. "We are not interested in students just picking an answer, but justifying their answers."

While many of the changes will be welcomed by students, the question arises: What led College Board to institute such significant reforms? The simple answer: class divide.

According to College Board, low-income students face serious disadvantages when preparing for the SAT. And this meant that, on average, they scored lower than wealthier students on every section of the test. Take a look at the troubling graph below:

The difference between low-income and high-income students' scores is shocking. But what leads to such a vast divide? The disturbing reality is that the more money you invest in test prep, the better you're likely to score. The SAT requires students to be familiar with its format and style; students whose parents can afford expensive prep classes and private tutors are simply better prepared for the exam.

"[T]hese exams have become disconnected from the work of high school classrooms and surrounded by costly test preparation," said Coleman.

The essay requirement is perhaps the most tricky component because students need a ton of practice to write coherent essays under a time limit. Unlike the reading and writing sections, students cannot simply buy or borrow a prep book and score themselves; they need a human grader to assess their work and provide feedback — which may be when prep classes come in handy the most.

There are of course other institutional factors at work: wealthier families are likely to live in better school districts which offer SAT prep and counseling, while low-income neighborhoods' schools often lack even basic resources. Still, College Board wants to fix the elements that it can, and that means focusing less on rote memorization and more on critical thinking and analysis.

The SAT is also facing increasing competition from its rival test, the ACT, which recently surpassed it in popularity:

In addition to changing the test format, College Board will also work with Khan Academy to offer free test prep material starting in 2015. Fee waivers will also be given to low-income students to apply to four colleges for free.

"What this country needs is not more tests, but more opportunities," Coleman said.

The finalized version of the new SAT, along with sample questions, will be available on April 16.