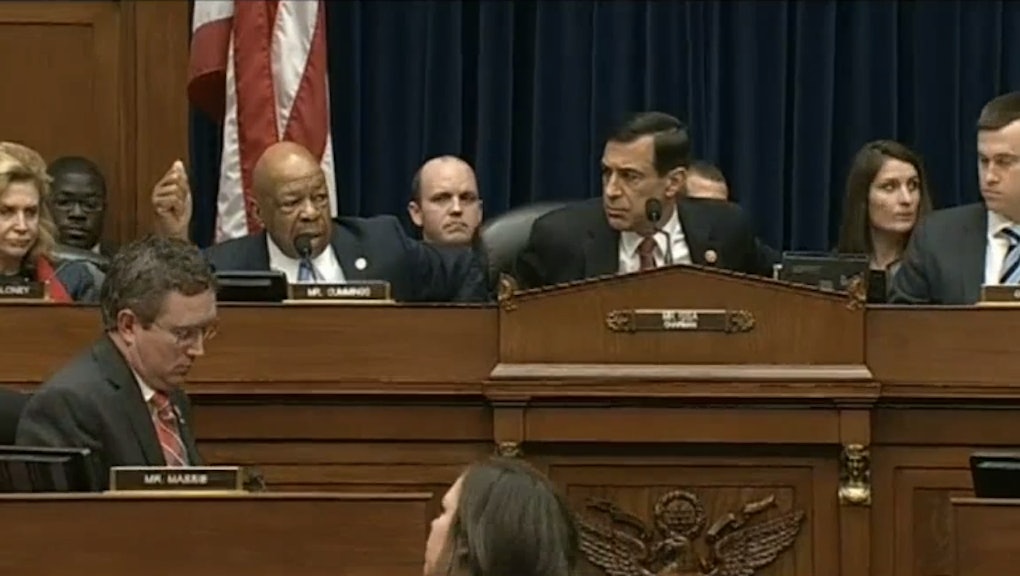 Watch This Liberal Congressman Handle a Conservative Bully With Class

Republicans are moving closer to a vote to hold former IRS official Lois Lerner in contempt of court over the still-ongoing IRS scandal, where conservatives in Congress allege that Obama's IRS illegally discriminated against Tea Party super PACs during the 2012 elections.

The FBI looked into the matter and found that no crimes had been committed, and Democrats released information proving that progressives were targeted under the IRS rules as well — though not to the same extent. Of course, that hasn't stopped Rep. Darrell Issa (R-Calif.) from using his power as the chairman of the House Oversight Committee to demand answers, or rather, keep up the charade to keep his base of conservative activists furious.

That led to this glorious exchange with Rep. Elijah Cummings (D-Md.) on Wednesday, as Issa gave a ridiculous conference in which apparently anyone who disagreed with him was not allowed to speak. Cummings had a procedural question, but first put in a jab at Issa, leading the latter to cut his mic:

At one point, Issa complained that Cummings "was actually slandering me at the point that the microphone went off," and soon after, Cummings responded by saying in so many words, as Gawker so eloquently put it, that "he's getting too old for this shit."

The IRS scandal, by the way, has cost about $14 million of the IRS' time, not to mention wasted innumerable hours by one of Congress' most important committees. But Issa is more concerned with appeasing the Right over his promise to find something, anything with which to take down the Obama administration instead of actually doing his job. That's led to his being pretty hilariously terrible at either task, unable to keep even the credulous, scandal-loving mainstream media's interest.

While we're talking far-out accusations that won't die, it might be worth noting that if we held Issa to his own standards, the congressman would be facing a congressional hearing for two alleged car thefts, lying about his service record and perhaps setting fire to a warehouse after quadrupling the fire insurance. You can bet Issa won't be taking questions on those ones, either.