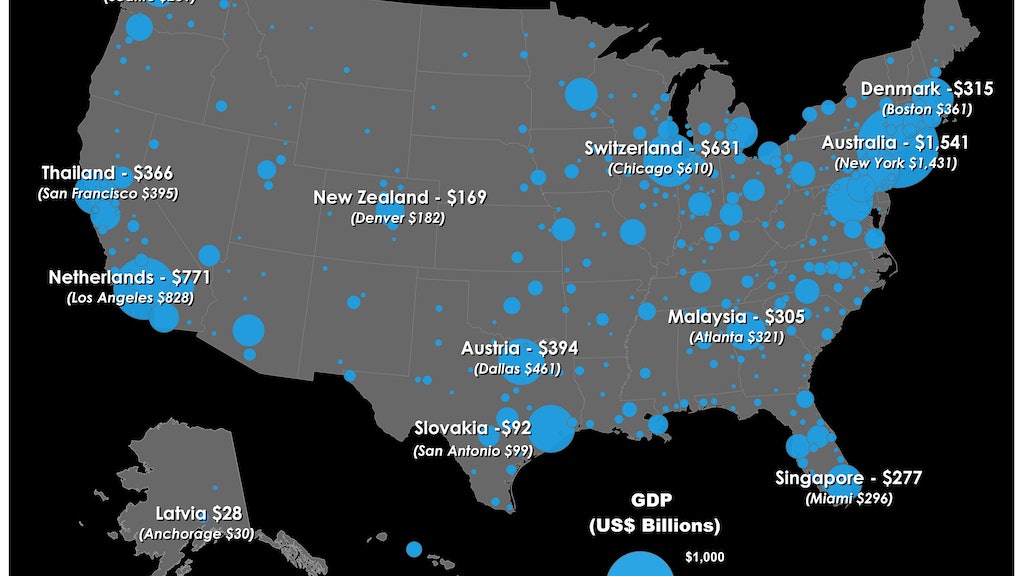 If you've seen this map of every U.S. state's GDP wealth compared to various countries around the world, you know that America is very, very rich. But most of that wealth is condensed into our nation's largest cities — New York and Los Angeles come to mind, but there's also Chicago, San Francisco, Boston, Miami and others to think about. The United States' metro areas comprise some 90% of its total GDP, so it's no surprise these are by far the richest parts of the country.

Coming to us via the Wire, the Martin Prosperity Institute's Zara Matheson compared the 2014 projections of GDP for U.S. metropolitan statistical areas to national GDP levels for 2012 (the most recent data available). The result is the above map, in which each of the above metros would easily rank amongst the 50 richest economies in the world.

The results are eye-opening, to say the least. San Francisco's $395 billion GDP is roughly equivalent to the entire nation of Thailand at $366 billion. Seattle ($281 billion) easily outclasses Hong Kong ($263 billion). Chicago ($610 billion) comes pretty close to Switzerland and all its secret bank accounts ($631 billion). And New York ($1,431 billion) is just $120 billion short of the entire country of Australia ($1,541 billion), or most of a continent.

America isn't the richest country in the world; our high population (disproportionately concentrated in those same cities) dilutes the effect of all that wealth. Still, the U.S. remains tremendously wealthy, ranked No. 6 in the world at $51,704 GDP per capita. Whether or not those riches are well distributed remains another issue entirely.