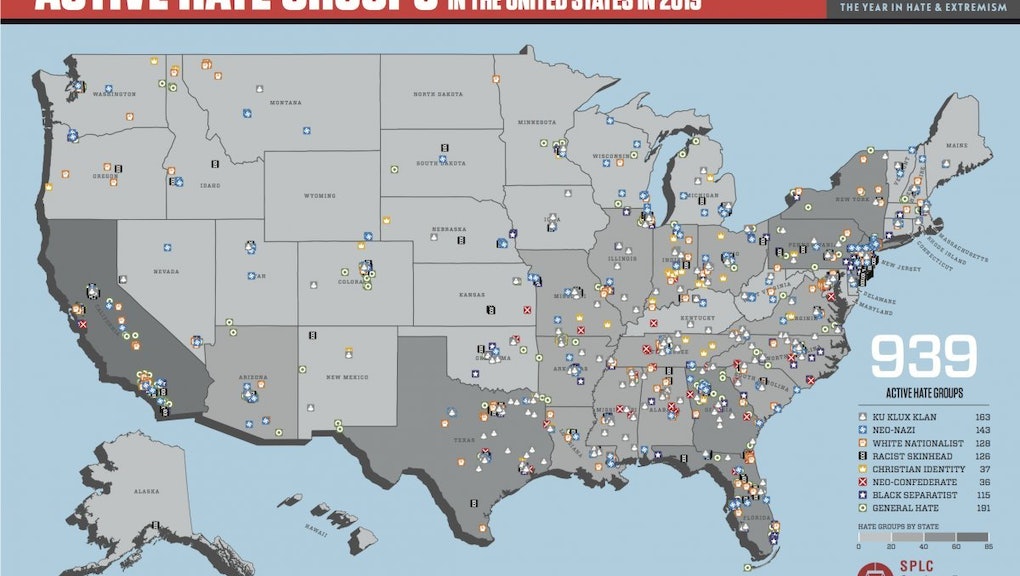 There Are 939 Active Hate Groups in the United States. Here's Where They Live.

You don't have to go far to find racism. It turns out President Obama's election was a boon to bigots, as can be seen on the Southern Poverty Law Center's recently-released "Hate Map."

In the year before Obama was elected, there were only 888 organized hate groups on record. Although the total number dropped from 1,007 in 2012 to 939 in 2013, that is still a disturbing increase. Black separatists do comprise a small part of this list, of course, but the rest includes a range of white supremacists (the Ku Klux Klan, Neo-Nazis, White Nationalists, Racist Skinheads, Neo-Confederates) and Christian Identity movements. It should be noted that there is a heavy concentration of these groups below the Mason-Dixon Line, although California technically has more than any other state.

Since the vast majority of America's affiliated hate parties promote a white racist ideology, it's helpful to briefly explore the history of those groups.

As George William Van Cleave points out in A Slaveholders' Union, a pro-slavery philosophy was embedded into our Constitution ... and that belief system was, in turn, dependent on racist concepts. Some of the most revered statesmen and thinkers of antebellum America, from Thomas Jefferson to John C. Calhoun, both practiced and preached the notion that some races were inherently superior to others. Even the founding fathers who abhorred racism like John Adams and Benjamin Franklin, felt it necessary to allow its perpetuation in the name of promoting the immediate cause of the American Revolution.

After the reconstruction amendments abolished slavery and guaranteed the franchise to African-Americans, movements sprang up across the South to counter the efforts of Radical Republicans to attain complete equality for the freed slaves. This racial reactionism catalyzed the birth of the Ku Klux Klan, which remained at the forefront of the white supremacist movement for the decade after the Civil War. As the pro-civil rights measures of Reconstruction were gradually revoked in order to solidify the reunification the North and South, organizations like the KKK began to shrink in numbers, although they never left the American landscape entirely.

Gone are the days when membership in the KKK or a comparable white supremacist group could be dismissed as simply one's ideology. When former conservative Democratic Sen. Robert Byrd was asked about his involvement in the Klan, he emphatically denounced his erstwhile peers; when libertarian Republican Rep. Ron Paul (R-Texas) was revealed to have disseminated racist newsletters in the mid-1990s, he denied having authored them, and only narrowly avoided having his 2012 campaign derailed by revelations that he maintained email correspondence with and accepted campaign contributions from white supremacists. The pattern holds even in Mississippi, where Mississippi State Senator Chris McDaniel is under heavy fire for retweeting a comment posted by a neo-confederate in his state. Open association with avowed racists is taboo today, with loud-and-proud hatemongers rightly relegated to the status of Jerry Springer freak show attractions and political punchlines.

The bad news, with a twist

Overt racism may be stigmatized, but covert racism is alive and well. The key to being an effective racist today is to conceal one's deeper prejudices under the guise of a seemingly non-racial cause. Those who hate racial minorities today find a haven in causes that can be plausibly characterized as not racist, from Arizona's draconian anti-immigration law and the widespread support for George Zimmerman to the racist presumptions of the birther movement and the University of Washington's discovery of prevalent racist attitudes among the Tea Party. Attitudes that were once open and direct are now concealed in the shadows.

In spite of all this, though, there is more cause for hope than fear. Racism may be alive and well, but even the presence of a re-elected black president has not been able to give them the staying power for which they no doubt hoped. Already there has been a decline in their numbers, and as millennials inherit the world possessing greater ethnic diversity and tolerance than any generation before them, the diminution of organized hatred is only going to continue.

Bad news for them, perhaps, but great news for America.