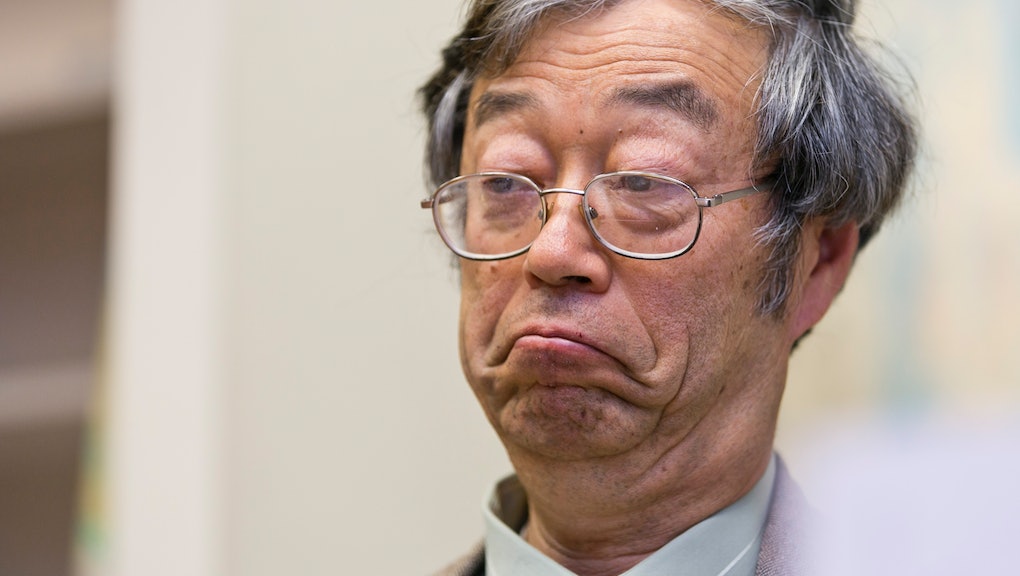 Is Dorian S. Nakamoto the Creator of Bitcoin? Your Guide to This Ridiculous Controversy

Bitcoin has been topping news headlines around the world lately. First, the Tokyo-based exchange center Mt. Gox imploded when it was revealed that hackers had stolen close to half a billion dollars worth of bitcoins. Then Sen. Joe Manchin (D-W.Va.) proposed a ban on the cryptocurrency. On Thursday, Newsweek reporter Leah McGrath Goodman released an exposé revealing the identity of the supposed inventor.

The man behind Bitcoin, she claimed, is Dorian Prentice Satoshi Nakamoto: a 64-year-old Japanese-American former engineer living in a modest home in Los Angeles. Since the story went live, Nakamoto has been through a whirlwird of weirdness. Dozens of zealous journalists arrived at his home to interview him yesterday afternoon. Nakamoto ultimately spoke to an AP reporter, saying, "I'm not involved in Bitcoin. Wait a minute — I want a free lunch — I'm going to go with this guy."

Nakamoto's denial has sparked a fierce debate over the validity of the Newsweek article. Is Nakamoto really the creator of Bitcoin, the highly volatile digital currency that has both been the primary method of exchange on the Internet's largest black market and tentatively advocated for by Fed Chairman Ben Bernanke? Here's the evidence we have so far.

Evidence that Nakamoto really is the creator

The name matches: The name Satoshi Nakamoto seemed to be hiding in plain sight. It was posted as the creator's username on the Bitcointalk forum for years as well as in a 2008 Bitcoin proposal paper. Newsweek discovered Nakamoto through a two-month search of public records and phone calls to his family members. Skeptics are arguing that this is ridiculous, and that it must be a pseudonym.

He stated that he used to be involved in Bitcoin: During Goodman's questioning, Nakamoto said, "I am no longer involved in that and I cannot discuss it. It's been turned over to other people. They are in charge of it now. I no longer have any connection." Although Nakamoto later denied that he was referring to Bitcoin, Goodman doubled down: "There was no confusion whatsoever about the context of our conversation—and his acknowledgment of his involvement in Bitcoin."

He has the technical skills necessary to create it: Nakamoto graduated from California Polytechnic State University with a degree in physics and has worked a long and varied career in positions ranging from systems engineer for RCA, computer engineer for LA tech companies, and a software engineer for the Federal Aviation Administration.

Much of his personal background matches up: If you try to imagine who might be the face behind a revolutionary cryptocurrency that bases its value on offering consumers privacy and the ability to work around government and banking institutions, you might envision a talented but eccentric engineer who keeps to himself and distrusts the government. Nakamoto, who is an intensely private person, is apparently a libertarian. His daughter said, "He was very wary of the government, taxes and people in charge." Seems about right.

But wait! There's plenty of contradictory evidence as well.

Evidence that Dorian Nakamoto is not the creator

He's denying it: Following Newsweek's exposé, Nakamoto met with a reporter from AP to discuss the allegations. He fiercely denied them, saying, "I have nothing to do with Bitcoin." When pressed on why he told Newsweek reporter Goodman that he had previously been involved, he claimed he'd simply misunderstood her. "I was at home [when Bitcoin was taking off.] I wasn't working for anybody," he said. At one point in the interview, Nakamoto referred to the cryptocurrency as "bitcom."

TechCrunch's Alexia Tsotsis followed up with the creator of the P2P Foundation's Ning, who verified that this account is probably legit. (The email address associated with it matches that of an earlier post and the 2008 proposal.)

Some of the pieces don't match up: Redditors on the r/bitcoin subreddit dug deeper into Nakamoto's background and found that, unlike the man behind Bitcoin, his English isn't very good. Additionally, Satoshi Nakamoti has $400 million worth of bitcoins. Why hasn't he spent it when, according to him and his family members, they could really use the money?

Ultimately though, does it matter who the real Satoshi Nakamoto is? Bitcoin is not illegal and its creator is not wanted for any crimes. According to Leah McGrath Goodman, the reporter who uncovered (or doxxed) him, her motivation in revealing Nakamoto's identy was simple curiosity: "I think that when somebody invents something that shapes the world, the want to know who he is and where he came from and what informed his invention is natural."

Her curiosity (and ours) is understandable of course. But Nakamoto is not a CEO, and he is not the only person working on Bitcoin. According to the digital currency's chief scientist, Gavin Andresen, coders other than Nakamoto "have rewritten roughly 70 percent of the code since inception." The point of Bitcoin is that it's highly decentralized and less subject to the whims of a few in power.

Some may use the identity of Bitoin's creator as a way to justify or invalidate the merits of the currency itself. But we might be wiser to take a page from Andresen's book instead. In a conversation with Goodman, Andresen said, "I don't care if the idea came from a good person or an evil person. Ideas stand on their own."