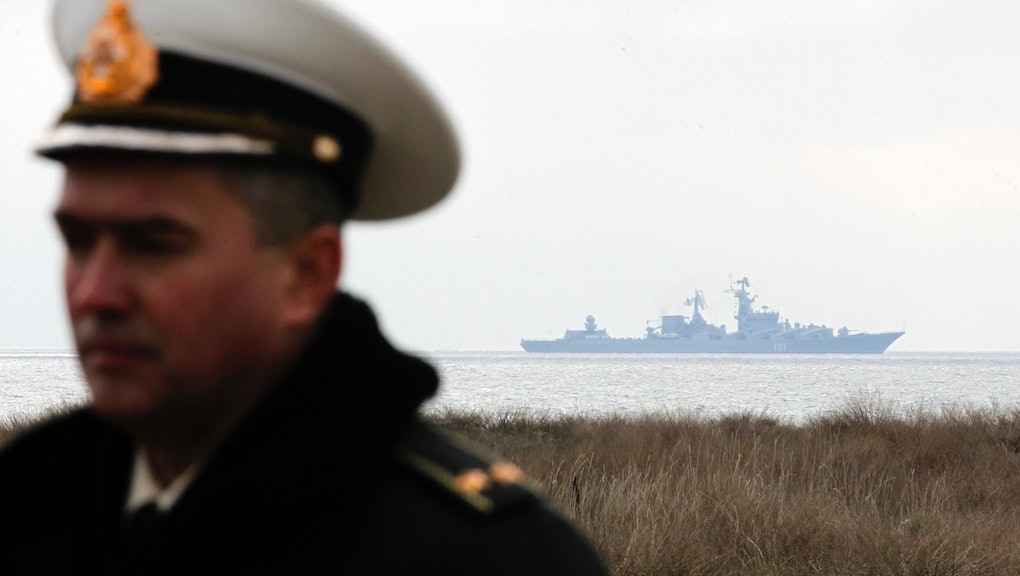 President Barack Obama may insist that Ukraine is not a pawn in "some Cold War chessboard," but the picture is starting to look a lot like it. Even as the U.S. and Russia hold talks to find a solution for the growing crisis in Crimea, both countries are holding military exercises around Ukraine, giving off the familiar vibe of the good-old days of Cold War brinkmanship.

The two countries's repeated calls for peace and stability, for one, are simply incongruous with their actions. On Thursday, Russia held its "largest ever" air defense exercises about 280 miles from the Ukrainian border. For its part, the U.S. sent six F-15 fighter jets to Lithuania and has announced that it will send 12 F-16 fighter jets and 300 service personnel to Poland next week for training. A Navy destroyer will also be deployed to the Baltic Sea to take part in a routine exercise.

Although Russia's military intervention in Ukraine has not yet resulted in any casualties, it looks as though the country is playing the long game. On Wednesday a Ukrainian official said that Russian forces sank a submarine in the Crimean harbor, creating an obstacle to prevent Ukrainian ships from leaving the base. The bay has also been blocked by 10 Russian vessels, effectively trapping the Ukrainian ships inland.

Much like the Cold War, the Ukrainian crisis playing out not as a series of military engagements, but as tension-filled diplomatic maneuvers. Last week, the U.S. suspended all military ties with Russia, warning that economic and diplomatic sanctions would follow if President Vladimir Putin continues escalating the country's occupation of Ukraine. A White House executive order has frozen U.S.-based assets of certain Russian officials, while the State Department is denying visas to Russian and Ukraine officials who were involved in the military takeover.

Still, Obama has insisted on finding a diplomatic solution and called Putin on Thursday to discuss a peaceful settlement. "In the course of the discussion there emerged differences in approaches and assessments of the causes which brought about the current crisis and the resulting state of affairs," the Kremlin said in a statement after the call. "Vladimir Putin, for his part, noted that this had occurred as a result of an anticonstitutional coup which does not have a national mandate."

But on a slightly more conciliatory note, the statement added that bilateral ties "should not be sacrificed for individual — albeit rather important — international problems."

These "international problems" have situated Ukraine as the unfortunate middle-man between the West and the East, caught in an increasingly passive-aggressive game of tug-of-war. But neither side will own up to it. Despite all the evidence to the contrary, Putin is insisting that Russia has not invaded Ukraine, and that the heavily armed forces in Crimea are simply pro-Russian volunteers. In response, Secretary of State John Kerry accused Russia of "falsehoods, intimidation and provocations" — all the while building up American military presence in the Baltics.

And for a bloodless takeover, it is already proving to be rather effective. Ukrainian forces have reported that Russian troops on the ground have been pressuring them to defect. The new head of Ukrainian navy has already sworn allegiance to the Russian-controlled Crimean navy, leading the Ukrainian government to charge him with treason.

But that's just how this familiar tune goes. The situation in Crimea is no longer just a civil conflict regarding regional autonomy; it's a global power struggle. Once Russia crossed the border, it set the clock back by twenty years. Now Ukraine and the surrounding Baltic countries are holding out their hands for help in the middle of the crossfire, while the chessmasters — the U.S., Russia, NATO, EU — figure out their next move.