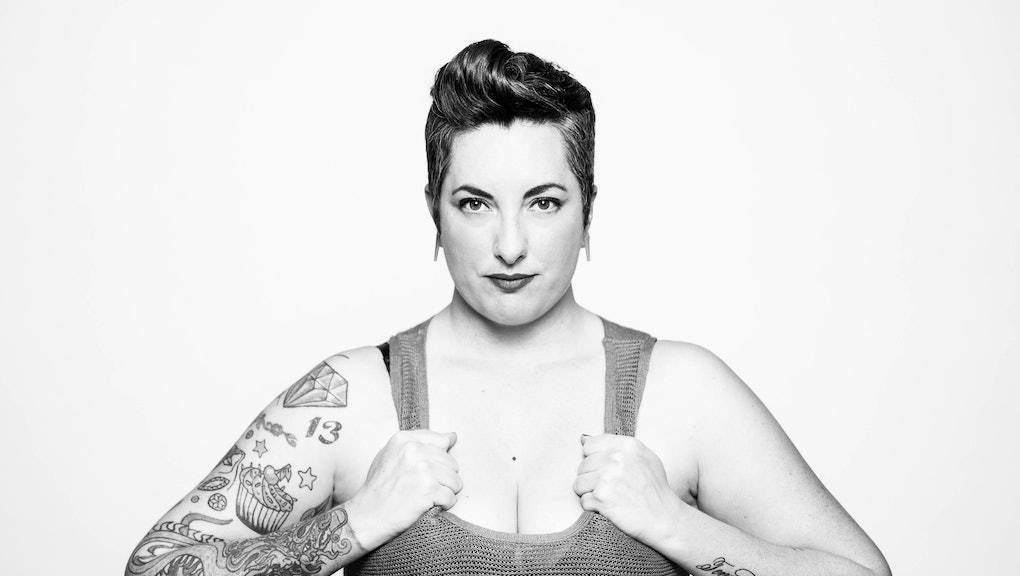 These are just some of the many ways members of the LGBT community identify themselves in a beautiful photo series from San Francisco-based photographer Sarah Deragon.

Deragon wants to take her "The Identity Project" around the country as she "seeks to explore the labels we choose to identify with when defining our gender and sexuality." Her portraits show the amazing diversity and vibance of a queer community that for too long has been defined by outsiders.

Deragon told PolicyMic she was inspired to create the project in part by a conversation she and her wife had with a friend from Brazil.

"We were talking about labels and how folks identity in the Bay Area and she was utterly blown away with the number of words that we choose when talking about our gender and sexuality," Deragon wrote in an email. "I started thinking about how my own identity has changed many times since I came out and how it'd be fun to document the beauty and diversity of our community with folks defining themselves."

The funny thing with labels is their power to both unite and tear each other down, she said via email. While initially she wasn't planning on attempting to break down stereotypes, one of her participants made her realize that the photos were doing just that.

"It is a celebration of individuality and I hope that anyone who has ever been ignored, belittled or denied for being who they are will find this project very inspirational," Deragon wrote. "All of my participants are incredibly brave (and beautiful) for standing up and being documented in this way."

Through this series, Deragon's more than 75 subjects are given a chance to express their individuality and joyous uniqueness.

"I've always known folks who feel that they don't fall under the LGBT umbrella, which is the reason why we keep adding more and more letters to the end of it. But identity is far more nuanced than that, especially when you ask someone about the gender identity/expression and sexuality," Deragon wrote. "This photo project shows us how incredibly diverse and creative we are! Participants in this project have taught me new words through the process and I just love how that's one of the evolving parts of it. One of my hopes is for a teenager living in a small American town or someone in Asia or Russia to look at the photo project and finally be able to put a word/s to how they've been feeling for a long time. I hope that the project makes folks feel more connected to one another."

The reaction from the LGBT community has so far been overwhelmingly positive, Deragon said, but she added that the project has something to offer the straight community as well.

"Obviously because of the content of the images, you would assume that this photo project is for the LGBT community, but I think it’s bigger than that," she explained. "There's a universality running throughout this project that should speak to people who haven't 'fit in,' for people who felt that their loved ones truly don't see them, and/or others who were denied for being who they truly are. Folks in the straight community don't struggle with terminology or identity the same way folks do in the LGBT community, but that doesn’' mean that they can't take something away from viewing the photos. All of our identities are politicized in one way or another; it is what we choose to do with them that matters."