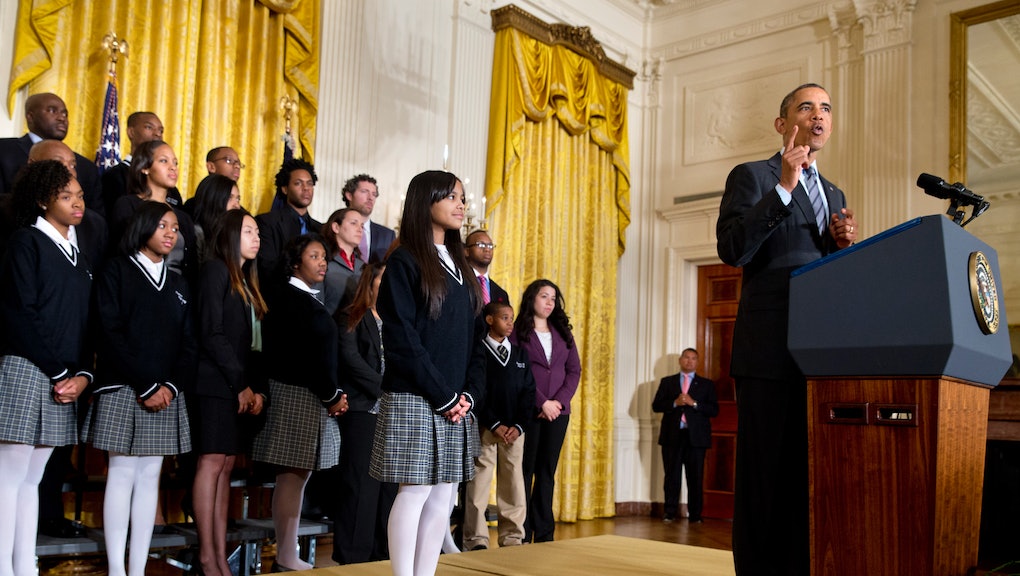 The new SAT is supposed to make both the test and the preparation for it fair to students of varying backgrounds, but don't be too excited about the overhaul. No reform can bridge the country's widening gap between students of wealthy and poor families.

Copying how the rich get an edge, on the other hand, might.

The SAT has long been criticized for giving white test takers a distinct advantage. It relies heavily on the culture and vocabulary of the white upper class and thereby hurts minorities' chances of being admitted to the best colleges. More than a decade ago, the Harvard Educational Review and Princeton Review found racial bias in test questions and concluded that the bias explains a considerable part of the score gap between black and white students.

In the new SAT, the controversial verbal section has been cleaned up, and "SAT-words" have been replaced with vocabulary any hard-working student can encounter in a college course, according to the College Board. Readings will include passages from one of America's founding documents, such as the Declaration of Independence or the Bill of Rights, or from important discussions of these texts such as Martin Luther King, Jr.'s "Letter From Birmingham Jail."

Whether the test has really entered a post-racial era is too soon to tell. Sample questions from the upcoming version, to be launched in 2016, will not be released until April. Either way, the new SAT will not solve the real problem.

The score gap between black and white, Hispanic and non-Hispanic white students has actually been narrowing slowly over the past two decades. The rich-poor gap, on the other hand, has grown 40% larger in standardized tests within the past 30 years. The test scores of students from high-income families have increased rapidly, and family income, rather than race, is now a better predictor of a child's success in school.

Here is what research from Stanford University found: While high-income families have gotten considerably richer over the past 30 years, deepening the great divide between the rich and the rest of the populace, they've invested increasingly more in the education of their children from early ages. It's hardly surprising that students in general stand a better chance in school if they come from an affluent family and don't have to deal with the everyday struggle of living in an impoverished household. What is new, however, is that high-income families are investing larger amounts of time, knowledge and money in their children's educational development. They recognize that getting ahead in school is becoming an increasingly important factor in future economic success.

On Wednesday, the College Board promised free test prep materials to all students in what was interpreted as an attempt to thwart the multi-billion dollar private test prep industry that has consistently given affluent students a leg up in the application process. Companies easily charge more than $1,000 for a single course, and the price of a private tutor can add up to $15,000 per year. Some experts, though, are questioning whether the free tests will have any impact at all.

"This initiative is not likely to make a dent in inequality," said Robert Schaeffer, public education director for the watchdog organization FairTest. He argued that wealthy parents would just seek out even better and even more personalized test prep service. In fact, the test prep industry expects a boom in the market. "People will always want an edge," said Seppy Basili, a vice president of Kaplan Test Prep. "Test changes always spur demand."

How can we move toward a society where educational success is not so strongly linked to family background? In Harlem, we see an answer.

Social activist and educator Geoffrey Canada caught the eye of everyone from Oprah Winfrey to President Obama, as he made incredible results with his Harlem Children's Zone, a 97-block area in central Harlem, where he founded the first Promise Academy Charter School nearly a decade ago.

The Promise Academy basically gives Harlem children what upper-middle class children receive. The charter schools raised millions through private money to have one adult for every six kids, state of the art science labs, parenting classes, intensive kindergartens, robust after-school programs and help with college applications. The key is investment.

A few years ago, President Obama sought to copy the idea nationwide with his Promise Neighborhood initiative, offering $150 million in grants to jump-start projects in places like Buffalo, New York and rural Kentucky. This january, he announced five "Promise Zones" where federal agencies will partner with economically hard-hit communities to fight poverty and support children.

Educational leaders across America keep an eye on the program in hopes of showing that costly and intensive interventions can reduce the spread of poverty across the country.

That's the beginning of a real solution.