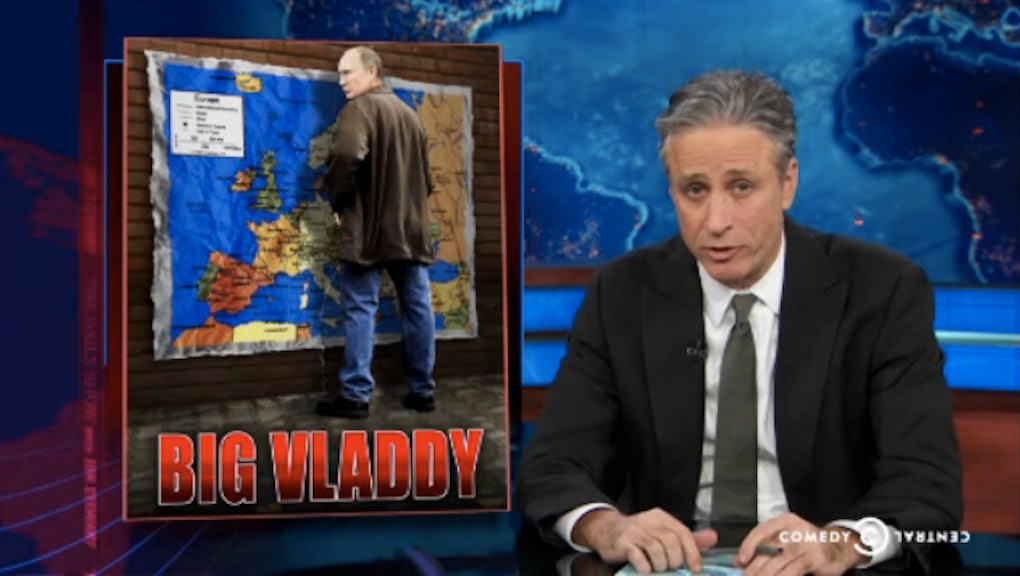 Jon Stewart has a message for conservatives lambasting the president for not being as tough as Putin over the dispute in the Crimea: what's wrong with you?

The trope is all over Fox News in particular, but the criticism is coming from right-leaning commentators of all stripes. The Washington Post called Obama weak and says "you could hear the laughter emanating from the Kremlin — followed by the sound of Russian military vehicles roaring into Crimea and seizing control of the peninsula." Charles Krauthammer called Putin a "lucky man" and accused Obama of "adolescent universalism," saying the president is a "clueless adversary." There are even commentators taking the view that Putin's actions can be instructive in forcing the U.S. to back aggressive Israeli foreign policy.

But that's, as Stewart aptly pointed out on last night's Daily Show, utter nonsense. The reality is that the U.S. has few good options in dealing with the brewing mess in the Ukraine, and the president is exhausting all diplomatic options before escalating the response. Now the clear next step is sanctions, which you might remember are the same tool hawkish politicians think can bring Iran to the table over its nuclear program. Some of these commentators wouldn't be satisfied by anything short of U.S. boots on the ground in Crimea, while others are attacking the president for some ill-defined measure of weakness without offering anything resembling an alternate proposal for action. And a few clearly have no agenda beyond attacking Obama.

To some extent, this isn't really about Putin at all; it's just another conservative talking point to trash the president by exaggerating the contrast between him and the machismo-touting Putin. Obama is hardly afraid to use force to achieve policy goals; he just doesn't feel the need to disrobe and shoot tigers to let everyone know how tough he is. In fact, if Obama did the same kind of thing Putin is doing, he would be rightfully called out for acting ridiculously. What we need is less chest-thumping, not more.