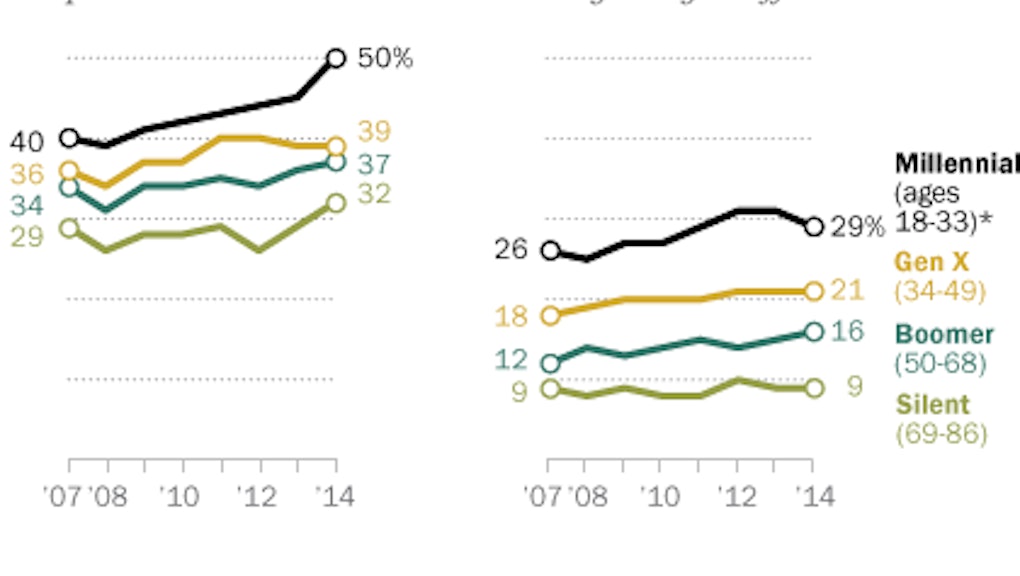 America's gigantic demographic shift is changing the country like never before, and the Millennials inheriting the country look very different from previous generations. Pew Research Center has released a survey with insights and thoughts of those aged 18-33, seeking to answer some questions about the differences between young Americans and their elders. Here are their six key takeaways.

1. We're independent and not very religious

That lines up pretty nicely with what Chris Hayes calls the 2000-2010 "Fail Decade," where institutions from all over the place ranging from the Catholic Church to the U.S. Congress either failed miserably to meet their stated goals or became embroiled in scandal. In the '90s, we had The West Wing; now we have House of Cards.

Millennials are the first American generation in the modern era to have "higher levels of student loan debt, poverty and unemployment" and "lower levels of wealth and personal income" than their parents and grandparents. But eight in 10 say they have enough money to live the lives they want, or think they will in the future.

So we're forward-looking little buggers, but that optimism might be a little misplaced. Millennials bear the brunt of pay cuts and layoffs, translating to lower salaries that will dog many of us for the rest of our lives.

Millennials, as of 2013? Just 26% of us have settled down with that lovely someone. However, 69% of us say we'd like to get hitched down the road, but for many, economic difficulties preclude marriage for now.

4. We're the most diverse American generation in history

Some 43% of Millennials are non-white, the highest share of any generation in American history. Hispanic and Asian Millennials lead the charge, also partially explaining why our generation is so dang liberal — and why Millennial-led movements like Occupy Wall Street are so focused on economic inequality.

The question: "Generally speaking, would you say that most people can be trusted or that you can’t be too careful in dealing with people?"

Just 19% of Millennials believe that most people can be trusted, probably because we got economically shafted. So that might be why when our money is on the line, a lot of Millennials act like this:

Previous generations were more trusting: 31% of Gen Xers, 37% of Silents and 40% of Boomers.

6. We don't believe the safety net will be around when we're old, but support it anyways

About half of Millennials suspect they're not going to get any social security benefits at all (the same with Gen X), and 39% think their benefits will be reduced. But that doesn't mean that Millennials don't support those programs — 61% oppose cuts as a method of shoring up social security's long-term benefits, indicating that their problem isn't with entitlements but rather the suspicion that Washington will either screw up the program or shrink it until it can be drowned in a bathtub.