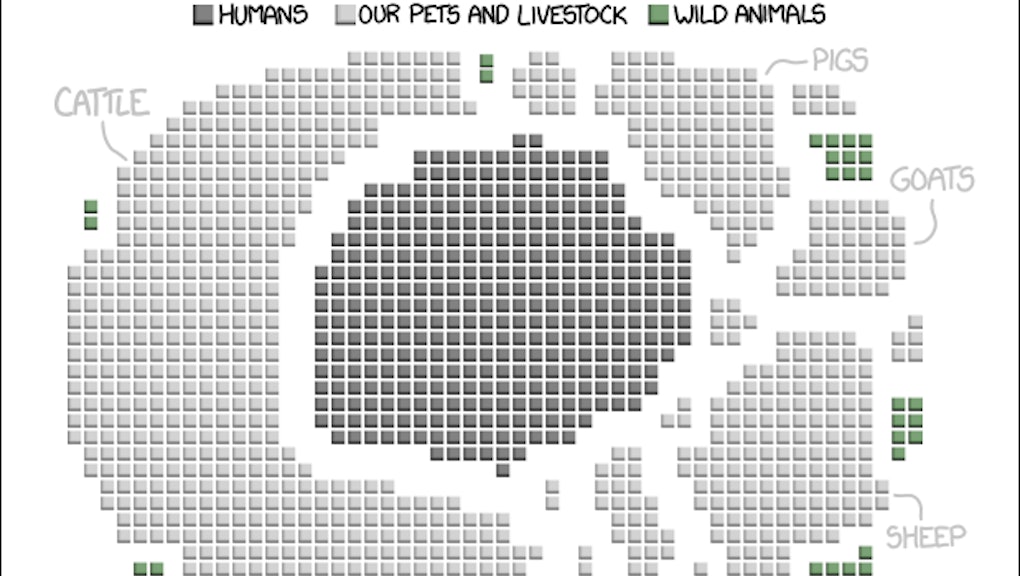 This Is Exactly How Much Weight Humans Take Up on Earth, Compared to Other Animals

Human population growth will become more and more of a problem as humans continue to thrive and consume the Earth's resources. But just how much impact do we have on the environment?

On Wednesday, popular webcomic site xkcd posted a graphic organizing the world's land mammals by weight, highlighting a different perspective on the footprint each species leaves. While this graphic does not show how much space each animal may occupy, it does paint a picture of how much weight different species contribute to Earth — and the results are pretty surprising:

As you can see, the graphic is dominated by humans and their pets and livestock. The sheer weight of cattle is especially striking, and underscores the impact of human cultivation and domestication.

One reason why the graphic features so many livestock species is because large wild animals are few and far between. While species like elephants weigh much more than sheep and goats, it takes a lot of food to sustain an animal of that size — making more evolutionary sense for most animals to be small, compact and efficient.

Of course, it's also important to keep in mind that this graphic only takes land mammals into account. When you factor in other animals — for instance, ants — the graphic becomes drastically different:

And it changes even more when you factor in other kingdoms, such as bacteria:

Humans take up a minuscule amount of the total weight on Earth, and we are dwarfed by the weight of even microscopic bacteria. Still, it's surprising to see how much we as a species — as well as our livestock — shape the landscape and the weight of the planet.