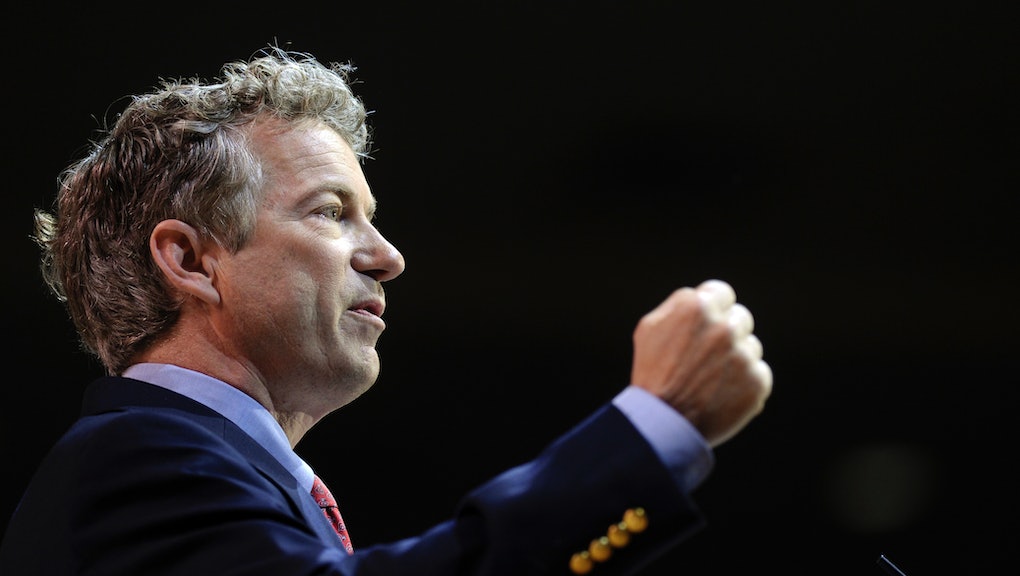 The annual Conservative Political Action Conference (CPAC) has held its annual straw poll. For the second year in a row, the winner was Senator Rand Paul of Kentucky. What does his victory mean? What does it tell us about the future of the Republican Party?

Here are the four things you need to know:

1. This is a great day for Rand Paul.

This is the fourth year out of five in which a libertarian has won the CPAC presidential straw poll. In 2010 and 2011, that honor went to Ron Paul, a Congressman from Texas and Rand's father. Last year Rand Paul picked up the top honor for the first time. In 2014, Rand Paul not only earned his second consecutive win, but he far outpaced any of his rivals.

Does this foreshadow Paul winning the GOP nomination in 2016? The answer is... maybe. At its best, the CPAC straw poll has provided political observers with insight into the deeper ideological currents flowing through the right-wing rank-and-file. In the past it has predicted the eventual nominations of Republican leaders like Ronald Reagan (who won in 1976, 1980, and 1984), George W. Bush (who won in 2000), and Mitt Romney (who won in 2007, 2008, 2009, and 2012). Considering Paul's already impressive showing in surveys of likely GOP primary voters, it isn't a stretch to say that this further legitimizes his presidential ambitions.

Of course, for every Reagan and Bush, there have been countless other conservative ideologues who triumphed at CPAC only to subsequently fizzle out. This is a list including the likes of Jack Kemp, Phil Gramm, Steve Forbes, Gary Bauer, Rudy Giuliani, and George Allen. While some of those candidates were guilty of nothing more than being wrongly tapped as the establishment favorite (I'm looking at you, Rudy), most were passionately loved by the GOP base but either self-destructed (Forbes, Allen) or proved too conservative to be even nominated, much less elected (Kemp, Gramm, Bauer).

In short, Paul's strong CPAC showing reveals that he has completed one half of any Republican nominee's task — namely, winning over the true believers. His mission now will be to retain their support while avoiding the pitfalls that cast his less fortunate predecessors into political obscurity.

2. Keep an eye on Ted Cruz and Ben Carson.

While Senator Ted Cruz of Texas and famed neurosurgeon Dr. Ben Carson failed to oust Paul, they both did well enough to deserve honorable mention (placing second and third at 11% and 9%, respectively). Two years is a lifetime in American politics, and should anything happen to diminish Paul's luster among party professionals and Tea Party patriots, Cruz and Carson clearly have the backing to supplant him. While most pundits seem to think Cruz is more likely to achieve this goal, I think the smart money is on Carson — while his ideas are as staunchly right-wing as Cruz's, Carson lacks his counterpart's "bull in a china shop" reputation. More notably, Carson can boast of his status as a genuine Washington outsider, something that always wins over conservatives looking to send the establishment a message.

3. Chris Christie is in trouble.

Christie may have received a standing ovation before delivering his CPAC speech, but he finished fourth in the straw poll with a measly 8%. His supporters are no doubt trying to pass this off as a respectable showing, but it's hard to see it as anything less than a massive fall from grace. This is the same party, after all, that was clamoring for Christie to step into the presidential ring when it seemed like their only options were Romney or an aviary of ideological loons. Although CPAC made it clear that they blamed their favorite boogeyman, the "liberal media," for Christie's Bridgegate woes, this obviously did not translate into a willingness to back the New Jersey governor's impending presidential bid.

4. Marco Rubio and Paul Ryan are in even bigger trouble.

It's hard to believe that, as recently as last year, Rubio was the odds-on favorite to win the Republican presidential nomination. Although Paul managed to eke out a victory in the 2013 CPAC straw poll, pundits were quick to note that Rubio had come within a few percentage points of denying him the prize. Unfortunately for Rubio, his support for immigration reform has seriously diminished his political brand among rightist hardliners; Rubio pulled in a shockingly paltry 6% this time around, ranking below not only Paul but Ted Cruz, Ben Carson, Chris Christie, and Rick Santorum. Since the premise of Rubio's candidacy was that he could combine the adulation of the Tea Party with the tantalizing prospect of electability, his poor performance undermines the very foundations of his case for being tapped.

Congressman Paul Ryan is in a similar boat. While supporting a budget compromise may have been the right move for America, it clearly alienated the same Tea Partyers on whom Ryan would rely for any successful presidential candidacy. Even worse, Ryan can't even plausibly argue to be able to carry his own swing state (after all, he did fail to pick up Wisconsin as Mitt Romney's running mate in 2012), leaving him with less of an electoral rationale than Rubio.

Rand Paul is flying high, Ted Cruz and Ben Carson are waiting in the wings, Chris Christie is floundering, and Marco Rubio and Paul Ryan can be safely written off.