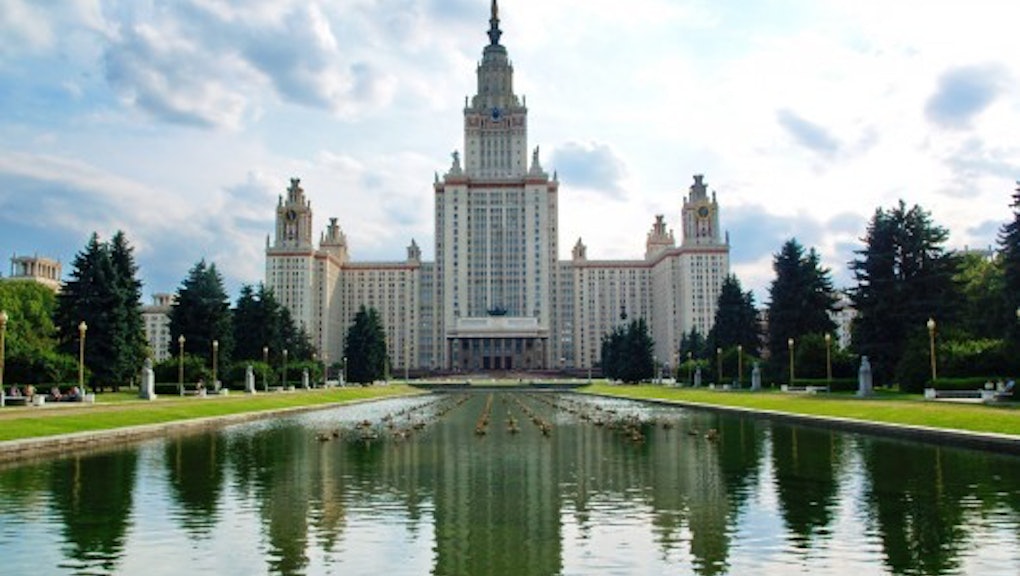 13 Photos of the World's Most Spectacular University Buildings

Have you ever walked through your college campus and just stopped for a minute to admire the incredibly beautiful buildings around you? Or vice versa, the hideously ugly ones? A lot of colleges and universities around the country and the world are hotbeds for architects to show off the talents and design truly spectacular buildings.

With data compiled by Emporis, ArchDaily put together a list of some of the most beautiful and architecturally innovative academic buildings around the world. You may think your school was beautiful, but some of these buildings really take the cake.

Built in 1953, the Universidad Nacional Autónoma de México's main library holds about 400,000 books and was designed by architects Juan O'Gorman, Gustavo Saavedra and Juan Martínez. Before the library moved into its current building, it was located in the Mexico City Center for 50 years.

Designed without windows for the first 10 floors to climate control the inside libraries, Bradfield Hall at Cornell Univesity was named for Richard Bradfield, Professor Emeritus, who was head of the Cornell Agronomy Department between 1937 and 1955. It was built in 1969 and designed by architects Ulrich Franzen & Associates.

When completed in 1953, Lev Vladimirovitch Rudnev's building for Lomonosov Moscow State University was the 7th-tallest skyscraper in the world and the tallest outside New York City. The sprawling Russian university covers more than half a square mile.

Finished just last year for the Università Degli Studi Di Torino in Italy, the Campus consists of two buildings and houses the faculties of Law and Political Science, which is roughly 5,000 students. It was designed by Foster + Partners.

Designed by Stirling & Gowan in 1968 for Cambridge University, the building was the result of an architectural competition — along with minor adjustments. In 1970, it was awarded the Royal Institute of British Architects Gold Medal.

Designed by Daniel Libeskind and completed in 2011 for the City University of Hong Kong, the building houses the School of Creative Media, and in 2012, it was assigned a BEAM Platinum sustainability rating.

Built in 2004 for Canada's OCAD University, the Sharp Centre for Design is perched 85 feet above the ground on 12 giant pencils. Design by Alsop Architects, Robbie/Young + Wright Architects, five out of the six multi-colored pairs of legs are painted black to give an illusion of slenderness, especially at night when the black legs seem to disappear.

Designed by Lyons Architects in 2012 for Australia's RMIT University, the university invested a total of $600 million in this building and the new RMIT Design Hub. The building has obtained a 5 star Green Star rating from the Green Building Council of Australia (GBCA) due to its environmental sustainability efforts.

Built in 2007 for the U.K.'s Univeristy of Plymouth, The Roland Levinsky Building was named in honor of the University's former vice-chancellor who passed that year. Designed by Henning Larsen Architects and BDP, numerous cafés and galleries in the building have turned it into a cultural meeting point in Plymouth.

Designed by Warrne & Wetmore and built in the neo-Flemish Renaissance style in 1928 for Belgium's  Katholieke Universiteit Leuven, during the Second World War, the building and its 900,000 books burnt down. It waslater rebuilt per the original design of architect Whitney Warren.