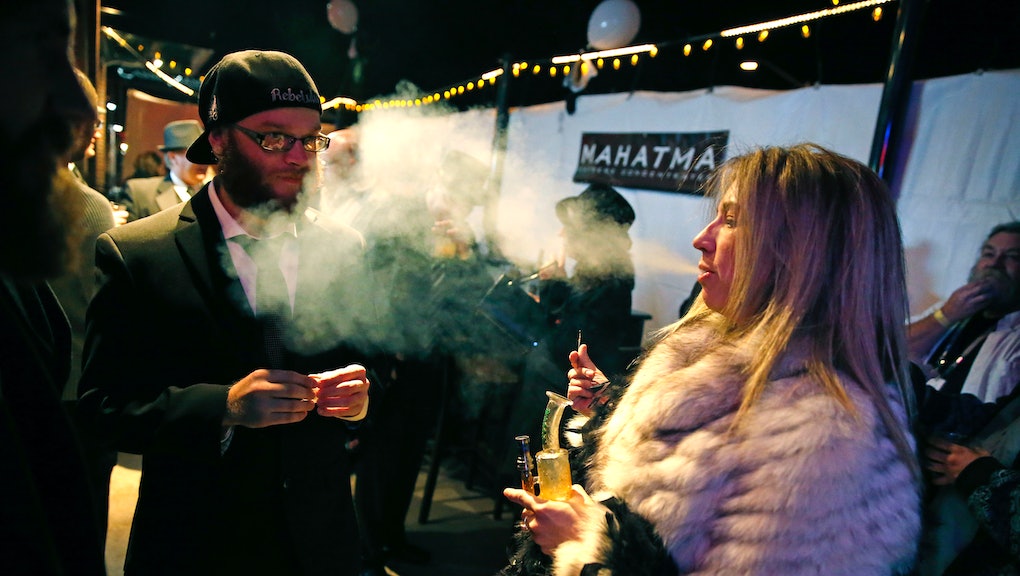 During panel on Thursday afternoon titled "Rocky Mountain High" that was supposed to be a debate between Mary Katharine Ham of Fox and Hot Air and Christopher Beach a staffer for former Drug Czar William Bennett's radio show, the audience's interest quickly veered away from the two's debate and into an extended question and answer session with the audience in which both Ham and Beach were taken to task.

One after another, the conservative, mostly libertarian crowd, lined up to challenge Beach's position on the war on drugs and the dangers of pot. A retired law enforcement officer asked how Beach could justify wasting law enforcement's time and money on pot possession when there were more serious crimes that needed attention — a common refrain we're hearing from more and more law officers. While Ham and Beach tried to offer arguments for the control and prohibition of pot — and sometimes making fairly compelling arguments, such as the fact that pot's illegality has increased its potency in recent decades more than most realize — but almost no one in the crowd seemed interested in defending a pro-prohibition stance.

The worst moment of the "panel" came when Beach tried to defend his stance by arguing that the first duty of government was to protect its citizens, which sometimes "means protecting them from themselves." Though a reasonable, albeit debatable, argument, the strongly libertarian audience was less than receptive of that kind of Big Government thinking.

Huge support: It wasn't just the "Rocky Mountain High" panel that brought about a discussion of marijuana legalization. The 2014 Washington Times/CPAC straw poll found that 41% of the attendees believe it's time to fully legalize marijuana and tax it, while another 21% said it should be legalized only for medicinal purposes. Just 31% said it should remain illegal in all cases.

That same poll also asked attendees for their current preference of Republican presidential candidate. With nearly three times the votes as his second place runner up, libertarian Sen. Rand Paul (R-Ky.) easily came out on top with 31% of the vote. Sen. Ted Cruz (R-Texas) followed with 11% and neurosurgeon turned conservative political activist Ben Carson came in third with 9%. But perhaps this isn't too much of a surprise — if CPAC attendees favor a Small Government, libertarian candidates are their top choice.

You can watch the entire panel below.