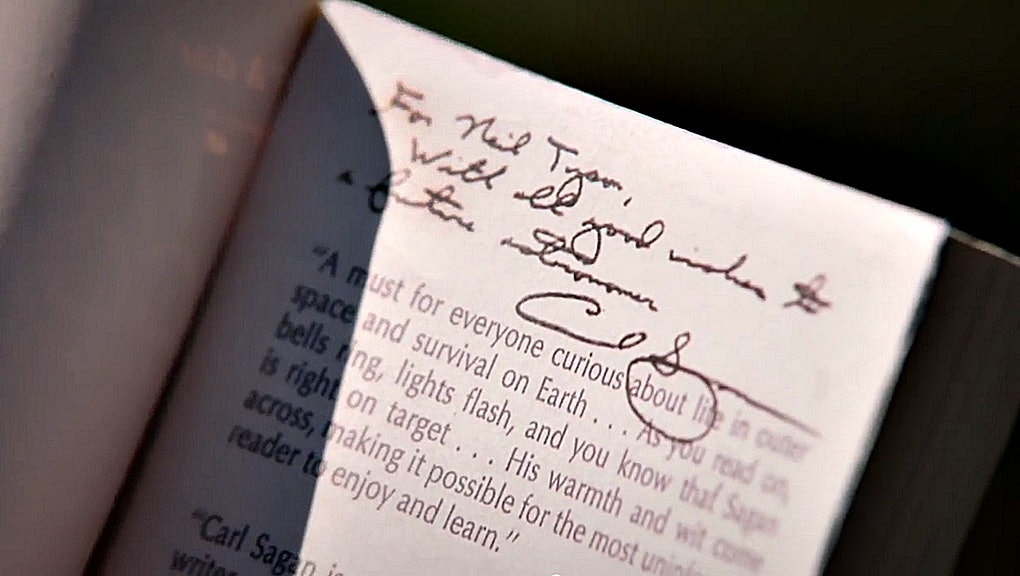 The Most Inspiring Moment of 'Cosmos' Was Seeing This

Tyson wowed us by taking us sailing through the universe in the Ship of Imagination, and walking us through a Cosmic Calendar to the beginning of time, with Gravity-rivaling visual effects on display. But the best moment of the pilot episode wasn't a mind-blowing graphic, or an unbelievable science fact. It was an anecdote.

Tyson closed the episode from the very same Californian cliffs where his legendary predecessor, Carl Sagan, originally introduced Cosmos to a curious American public back in 1980. Sitting on a rock, from his backpack he whipped out an old personal calendar — Sagan's. Opening it up to December 20, 1975, he reveals an entry marked: "Neil Tyson."

I was just a 17-year old kid from the Bronx with dreams of becoming a scientist, and somehow the world's most famous astronomer found time to invite me to Ithaca in upstate NY and spend a Saturday with him.I remember that snowy day like it was yesterday. He met me at the bus stop. He showed me his laboratory at Cornell University. Carl reached behind his desk, and inscribed this book (Cosmic Connection) for me:At the end of the day, he drove me back to the bus station. The snow was falling harder. He wrote his phone number, his home phone number, on a scrap of paper. And he said, “If the bus can’t get through, call me. Spend the night at my home, with my family.”I already knew I wanted to become a scientist, but that afternoon I learned from Carl the kind of person I wanted to become. He reached out to me and to countless others. Inspiring so many of us to study, teach, and do science. Science is a co-operative enterprise, spanning the generations. It's the passing of a torch from teacher to student to teacher. A community of minds reaching back from antiquity and forward to the stars.

Profound. Carl Sagan, who died in 1996, presented the original Cosmos on PBS, was an astrophysics professor at Cornell, published over 600 scientific papers, and played a leading role in all of the early spacecraft missions exploring the Solar System.

Out of all the endless scientific and media achievements that Carl Sagan is known for, Tyson's own most lasting memory of the man is of his humanity. Here's Tyson describing the same encounter on a talk show:

Tyson's story brilliantly demonstrates the public value of science and communicating it well. Incidences like these show that science is, above all, a human endeavour that brings us all together. Modern society loves to over-celebrate the successes of individualism, but the truth is every Newton, Einstein, or Hawking, each stands on the shoulder of giants themselves. Their true genius is collective.

This is the story of science. Through collaboration, community, and working towards aspirational common goals, science inspires the very best out of humanity.