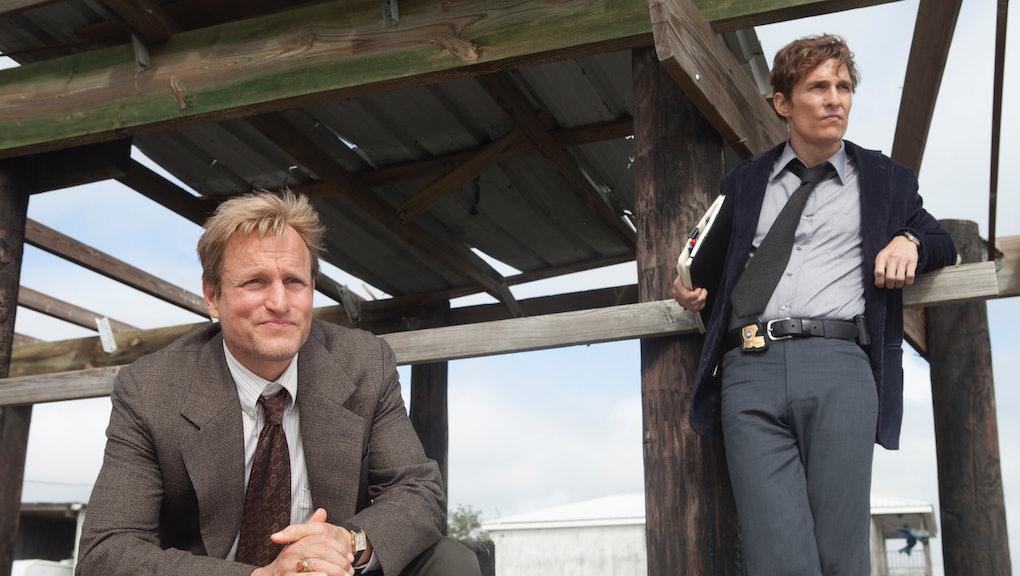 But the finale made it clearer than ever that their story was less about solving the crime than finding redemption, both within themselves and between one another. And no one embodied that dark journey more memorably than Matthew McConaughey.

Det. Rust Cohle has become the subject of countless memes and online parodies in the past months. But to prepare for the character’s shell-shocked cynicism and existential philosophizing, McConaughey underwent the kind of immersive and obsessive preparation one might expect from a recent Oscar-winner – and even from the fictional detective himself.

Business Insider reports that McConaughey prepared by assembling a massive book-sized graph, which charts Rust’s character arc from over the span of 17 years. "I just basically broke it down and made a 450-page graph of where Cohle was and where he was coming from," McConaughey said.

Here are some excerpts encompassing the “Four Stages of Rust Cohle”:

1. 1995 Cohle: "Back to being a part of the body. He's coming off of years being Crash. He's trying to walk the line. Monk-like. Trying to hold it together. And that's a lot easier with less interaction with others. There's a mechanical side to him. He needs the regimen of the homicide detective. He needs the case to actually survive. One, because he's great at it. And two, because it's going to keep him from killing himself."

2. Crash: "He's our deep, narco wild-ass. A guy who goes all the way. This is where Cohle has all the freedom. He can go over the edge as this guy. And inside, he loves the life of Crash even more, because the shackles are off of him. He knows he may die sooner living this life, but there's a freedom and peace in that knowledge for him."

3. 2002 Cohle: "A little looser mix of Crash and the '95 Cohle. A guy who's made his boundaries clear and has to mark less territory, so he's relaxed into his way in the world. But the case is still his lifeline. He has some small hope that there's going to be a way out of his being and pain and criticism, so he makes an effort into domesticity, a la the girlfriend. Only to prove that he was not made for it, and there is no way out. So what does he do? He resigns to his nature, once again.”

4. 2012 Cohle: "This guy lived longer than he hoped. Fallen prey to his own beliefs. More cynical, angrier, he's had to endure the existence of this s---storm called life. A little ragged, more rough edges, living in a place where he can manage himself. Not too close. He's not in the CID. But he's not in Alaska. He's a guy who's resigned to his indentured servitude of being alive. But he despises the sentence and the penance. He will not accept defeat. He's not going become a madman, he's not going to kill himself. He wrestles the devil every day, and he realizes that this may last a lot longer than he ever hoped for."

A national obsession: How appropriate that a show so rich in psychological detail has gripped the public’s imagination. The level of fan investment has assumed a life of its own: so many online viewers tuned in to last night’s finale that HBO GO crashed beneath the overwhelming demand.

Image Credit: We Keep the Other Bad Men from the Door

But perhaps the show’s most burning questions involved the identity of the “Yellow King,” a mysterious figure whose role in the killings long remained unclear. Nic Pizzolatto’s dense screenwriting gave clues by alluding to Robert Chambers’ 1895 short story collection The King in Yellow, which involves a play that causes readers to go insane. Even True Detective’s killer, Errol Childress, bears striking physical similarities to Mr. Wilde, a sinister King in Yellow character whose face is covered in scars and who wears a pair of artificial ears:

Theories regarding the King’s identity reached such a fever pitch that they spawned their own parody video:

Yet despite the countless elliptical fan theories, the season finale proved much simpler than any viewer could have imagined. In the end, the killer was who we thought it was. And the soul of the show remained the doggedly committed performances of Matthew McConaughey and Woody Harrelson, two actors whose long-standing partnership reached a unique apex with these characters.

Because ultimately, the only element left standing was the psychological and emotional bond between Rust Cohle and Marty Hart, two men torn apart by personal demons and destructive choices who reunited because they had a “debt” to pay.

To save themselves, they needed to catch this killer. And in the end, they did.