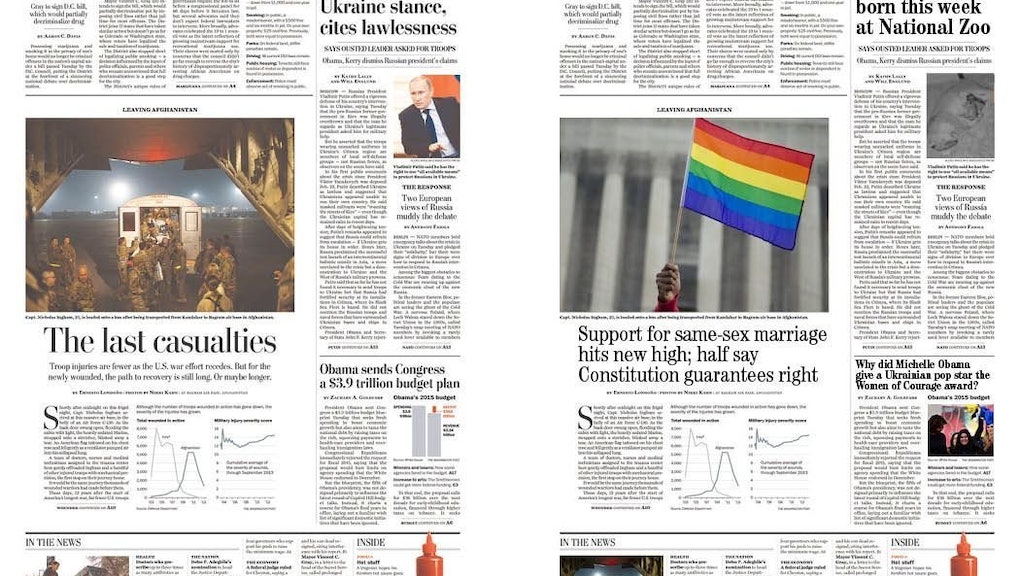 What 13 Newspapers Would Look Like If You, Not Editors, Choose the Front Pages

For those people who prefer to read the news on paper, the front page is an important part of news consumption: not only does it highlight certain stories, but it also gives an indication of the editorial priorities of certain papers. But do these priorities actually align with what readers are interested in?

As an experiment, the news-sharing site NewsWhip took the covers of 13 international newspapers and examined the social media share stats for each article on the front page. It then laid out a new cover based on article popularity, providing interesting insight into what kind of stories readers like to read and share.

WSJ readers almost completely replaced the editorial cover, sharing more culture and entertainment articles: Hollywood criticism of Venezuela, writer Khaled Hosseini's review of the novel Billy Lynn's Long Halftime Walk, comfortable plane seats and HBO's Game of Thrones rap mixtape. The only news story that made the cut was on increasing the budget for veterans' care, which wasn't on the original cover.

WaPo readers cared more about same-sex marriage than pot legalization, the budget plan or the crisis in Ukraine. But they kept wounded veterans on the front page and spotlighted a story on four lion cubs being born at the National Zoo — because baby animals are important.

NYT readers liked the update on Ukraine, but that was the only article from the original cover that they liked. The readers' cover features stories on the viral campaign against a Brooklyn school, writer Sherwin Nuland's death, an Indianapolis bike path, AIDS protection shots and "the top 10 ramen destinations in New York."

USA Today perhaps had the cover that best reflects its readers' interests. A feature on Russian stocks was replaced by a story on a New Jersey teen who sued her parents to pay her college tuition. The only other change shockingly swapped Dancing With the Stars with the budget debate.

Readers of the Guardian kept the front page mostly the same, but with different emphasis on certain articles. Like the Daily Mail readers, they shared a story on unhealthy eating the most. Instead of stories on Chanel or the World Cup, they also chose to share the BBC's decision to close down BBC3.

The cover of the Irish Times completely changed: Instead of sharing stories about surfing, the debt crisis or student rugby injuries, the readers chose stories on Haiti's Carnival, the crisis in Ukraine and government collusion in the 1989 murders of two RUC officers.

None of the Metro's stories made the readers' cut. Instead of choosing stories on the singer Charlotte Church or new contraceptives, the readers shared a viral video of a stranger giving $1,000 to a homeless man, an update on a passing asteroid and a fantastically-headlined story called, "Swiss cheese pervert in more trouble with police."

The Independent's editors chose to spotlight soccer, the crisis in Ukraine and immigration. Its readers instead shared a story on Lupita Nyong'o's empowering speech on race and beauty, as well as controversial remarks by British politicians (or their families).

A health piece on sugar is the only story that made both covers. Instead of migration, army cuts or Scottish independence, the readers of the Daily Telegraph chose to share stories on an army ban on sandwiches, the Viking roots of sarcasm, fighter pilot selfies and a Simpson-ized version of the famous Oscars selfie.