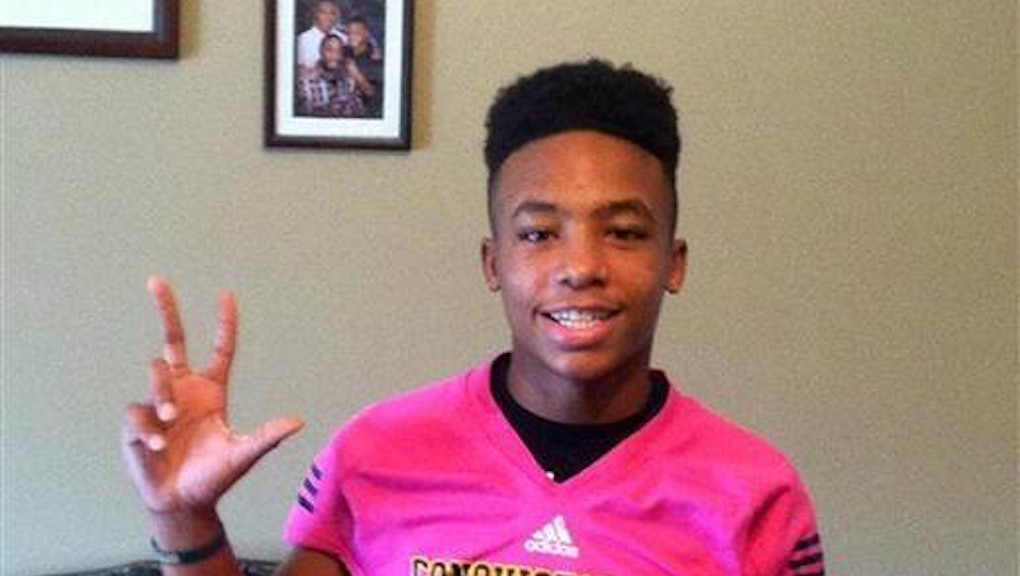 On Feb. 3, assistant principal Todd Nichols summoned him out of class. Nichols showed Dontadrian a photo he had posed for during a recent biology project, in which the boy had his hand up displaying three raised fingers – his thumb, forefinger and middle finger. “You’re suspended,” said Nichols, “because you’re holding up gang signs in this picture.”

Wait, what? The above photo was taken by the boy’s mother, Janet Hightower. It recreates the "incriminating" image: “He’s a good child,” she insists. “I know what he does 24 hours a day.”

Dontadrian also says he had no clue that this gesture was affiliated with the Vice Lords, a Chicago-based street gang with active Deep South chapters. He claims he was holding up three fingers to represent the number on his football jersey, like the other players did during practice.

So what’s going on here? NBC’s Nona Willis Aronowitz reports that Dontadrian’s punishment is emblematic of what happens when fear of gang activity in schools “collides” with so-called “zero tolerance” discipline policies, which favor suspensions and expulsions as punishment.

The numbers: Suspensions and expulsions among high school students have risen 40% in the past four decades, largely aided by these draconian rules. What’s more, “zero tolerance” disproportionately targets students of color: “Racial discrimination in school discipline is a real problem today,” says U.S. Secretary of Education Arne Duncan. “[Exclusionary] discipline is applied disproportionately to children of color and students with disabilities.”

Black, Latino and disabled kids accounted for 7 out of every 10 suspensions or expulsions in 2010-11. Additionally, as many as 95% of suspensions are for nonviolent misbehavior, such as “being disruptive, acting disrespectfully, tardiness, profanity, and dress code violations.” Duncan argues that administrators have become overly reliant on such solutions: “Educationally, and morally, that status quo is simply unacceptable.”

Underlying issues: The problem with Dontadrian’s punishment in particular is its subjective nature. That such harsh retribution was doled out based on a verdict that could have easily gone either way has residents scratching their heads. Dontadrian has a clear opinion on the issue: “They figured I was a gang member because of my color.”

His stepfather adds that this would not have happened to a white student: “I was born and raised here, graduated from Olive Branch, and I’m telling you: they would have done nothing,” he said.

Punishment for suspicious hand gestures among black students has been a nationwide occurrence lately. In Wisconsin earlier this year, “mostly-white” Sheboygan Falls High School suspended two black students for throwing up what “looked like” gang signs in a photo. Their punishment was ultimately overturned following a major media backlash.

“Guilty until proven innocent.” There’s a fine line educators are expected to walk between protecting the safety of their students and overreacting with draconian punishment. It’s a challenging issue to address, and brings added nuance to an already difficult profession.

But to be frank, Dontadrian’s punishment just seems lazy. It fails to account for the student’s personal history, and presents no actual evidence whatsoever that the boy was involved with gangs. “[These kids] could be straight honor roll, but they’re almost treated as guilty until proven innocent,” said Chicago community organizer Joel Rodriguez. “Just talk to them. We have to put relationships back in the school system.” Herein lies the real problem with “zero tolerance”: It presents an easy way to avoid addressing very real issues.

What now? Dontadrian was eventually invited back to school, but Olive Branch High is standing by their form of “due process.” His mother is currently working with an ACLU attorney to ensure this incident doesn’t smear her son’s personal record – as often happens in these instances.

What a mess. Hopefully soon, the nation’s educators will heed Arne Duncan’s words and remedy their approach to discipline – especially when it comes to disproportionately impacted children of color.