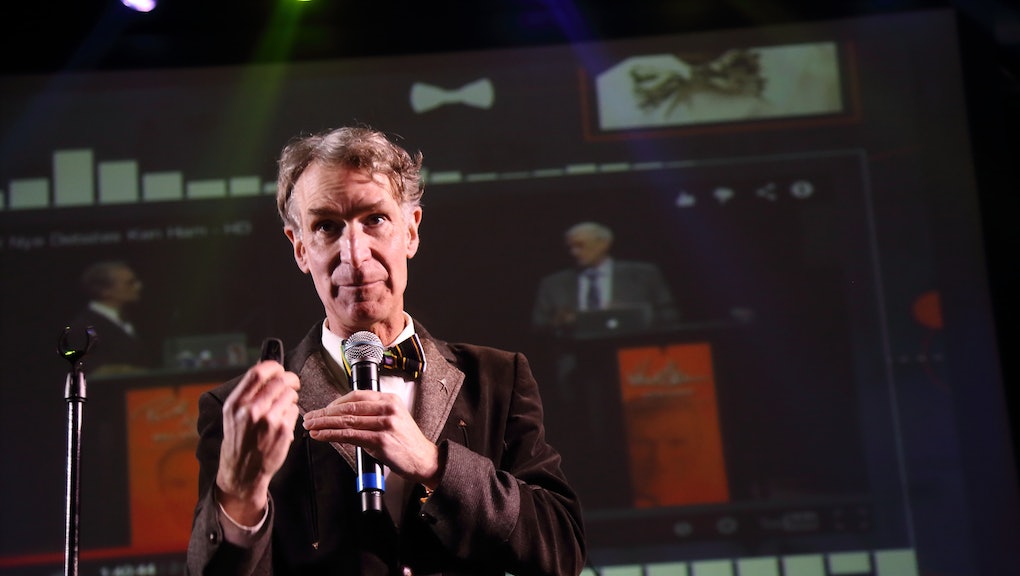 It's been cold this winter. We've learned to wrap up, layer and double-scarf. The South even learned to drive in an icy mess (kind of). Unfortunately the cold brought out more than heavy jackets. Climate change deniers got on their soapboxes and made comments that would make Bill Nye cringe.

Climate change is still a politically divisive issue, despite scientists' near unanimous agreement on the issue. A plurality of Americans, 42%, believe global warming is "generally exaggerated." Forty percent believe that changes in global temperatures are due more to natural causes than human activities, according to Gallup polling. There's also a significant difference based on political affiliation.

But let's put aside pundits and polls and look at the data. The Intergovernmental Panel on Climate Change has started to release its latest compilation of scientific data, and based on those findings has stated, "Global warming of the climate is unequivocal ... and many of the changes are unprecedented over decades or millennia."

Though there are differences in the models of how rapidly climate change is occurring or what specific factors are contributing to the changes, the scientific community agrees that climate change is happening and it's our fault.

Below are cringe-worthy comments climate deniers have made that contradict the available information on global warming. Their expert logic on global warming is pretty much flawless. Good thing we have Bill Nye to channel our inner (frustrated) scientist.

Yes, we do still have snow, but that's not proof of a hoax.

Scientists started recording climate change data in the 1880s and have documented "spring creep." Spring now arrives 10 days earlier than in the past. Even though an early spring sounds much better than braving the cold, it completely messes up the ecosystem. When the snow melts earlier, the dams fill up too soon and water must be released ahead of schedule. This leads to dry soil later in the season, ultimately contributing to forest fires.

In an interview about climate change, Sen. James Inhofe of Oklahoma quoted Genesis 8:22 and added, "God's still up there. The arrogance of people to think that we human beings would be able to change what He is doing in the climate is to me outrageous."

But the devil is in the details. In this case, it's in carbon atoms. An Increase in carbon atoms in the atmosphere produces warmer temperatures, and scientists can tell which ones come from human activities by comparing emissions from natural sources. Your "carbon footprint" is the carbon dioxide released when you burn coal, oil or fossil fuels.

More than 97% of climatologists think that climate change is caused by human activity. That means nearly all climate scientists think that both climate change is real and it's caused by human activity. The other 3% are fighting over what the cause of the warming Earth is. It's pretty bold to assert that an entire academic community is corrupt and promoting a financial agenda.

Climate change deniers usually use the polar vortex to "disprove" global warming, but Rush Limbaugh was creative. He admits the polar vortex is a part of climate change, but that the media hyped it up for headlines. Well, if that's the case, this is the longest media campaign ever.

In 1950 Dr. Dave Fultz described an experiment that replicated the results of the vortex in relation to global warming. I hope Fultz at least got some new Twitter followers out of that arrangement.

This is the perfect example of why many temperature readings are taken over a long period of time.

We still have cold weather, but the temperature trend is steadily climbing. In fact, the ten warmest years on record have all been after 1998. What Mr. Trump is describing is at best a short-term trend and at worst an anomaly.

Glenn Beck said: "Al Gore's not going to be rounding up Jews and exterminating them. It is the same tactic, however. The goal is different. The goal is globalization … and you must silence all dissenting voices. That's what Hitler did. That’s what Al Gore, the U.N. and everybody on the global warming bandwagon [are doing]."

Glenn Beck's scare tactic not only feels uncomfortable, it's also not an accurate assessment of the issue. Global warming is a scientific problem with public policy implications. Beck seems to forget there is a right and wrong answer in the science part of this problem. If something is true, scientists and citizens come to a consensus about it. That's not some communist brain-washing technique. It's the scientific process.

Rep. Tom Griffin of Arkansas stated, "I am not convinced that the problem of global warming is what the scientists say it is... There are a lot of shenanigans going on with the data."

When all else fails, all climate change deniers have to do is blame shenanigans and call it a day. It's the questionably grown-up version of covering your ears and proclaiming loudly, "I CAN'T HEAR YOU!" But if they ever do uncover their ears, they may want to check out the data from the past century.