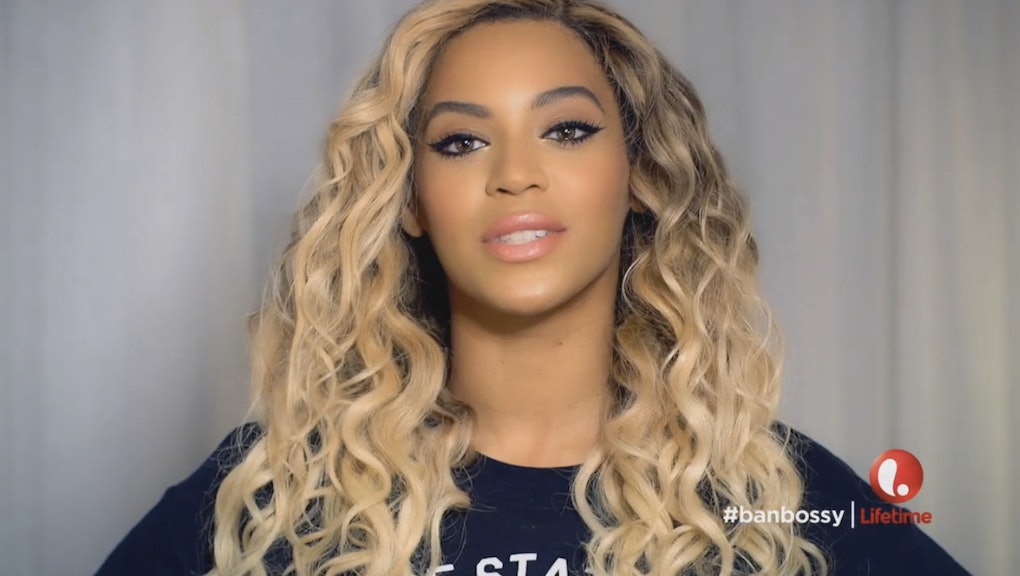 Why Powerful Women Want to Ban the B-Word. (No, Not That One.)

That was one of the standout statements from Lean In, Sheryl Sandberg's best-selling book that was published in March 2013 and quickly became an international phenomenon. One year later, the Facebook COO has joined forces with other powerful leaders and entertainers, including Girl Scouts of the USA CEO Anna Maria Chávez and Beyoncé, to launch a full-scale campaign to ban the b-word.

The campaign's leaders argue that girls who are confident or driven are labeled bossy, while their male counterparts are called leaders. Not only does this send young women the message that they shouldn't speak up in class or run for president of a school club, it also has serious knock-on effects.

"Calling a girl 'bossy' not only undermines her ability to see herself as a leader, but it also influences how others treat her," Sandberg and Chávez wrote Saturday in the Wall Street Journal.

What's more, "these stereotypes become self-fulfilling prophecies," playing a major role in why women make up just 19% of the U.S. Congress, 10% of heads of state and 5% of Fortune 500 CEOs. If we want women to grow up to become leaders, we must stop belittling them — there's another b-word for you — and instead encourage them to embrace the qualities that in men would be considered "executive leadership skills."

Indeed, "bossy" as a disparaging term historically has been applied overwhelmingly to girls. The Oxford English Dictionary traces the word to a Harper's Magazine article from 1882 about a female manager "who was dreadfully bossy." The word gained prominence in the 1930s when women were moving into the workplace, according to a Google analysis of books written in the last century, and peaked in the 1970s during the rise of second-wave feminism.

This Wall Street Journal infographic of the Google books data shows the discrepancy between how often men and women are called bossy:

Similarly, this Pantene ad that went viral late last year highlights the different terminology applied to men and women in the workplace: A man is persuasive, a woman is pushy; a man is neat, a woman is vain; a man is a boss, a woman is bossy.

In the Wall Street Journal op-ed, Sandberg notes that when her siblings describe the Sandberg childhood, "they will say that I never actually played as a child but instead just organized other kids' play." That sounds familiar to me.

Like Sandberg, when I was younger I used to organize my siblings and cousins into rehearsing and performing the plays I had written. As the eldest of four children, and oldest girl in a 26-strong group of grandchildren, "bossy" is a word that has been thrown at me for as long as I can remember: often critically, sometimes lovingly, but never at my older male cousin who's equally confident and assertive.

Yet the characteristics that earned me the "bossy" badge growing up are the very same that drove me to run successfully for election as the president of the Cambridge Union Society at university — in fact, I was the debating society's 24th female president in a near 200-year history of three presidents a year (you do the math). My "bossy" nature is also the one that's come in handy when applying for competitive graduate schools and jobs, and the very same that has fueled my desire and dedication to pursue journalism.

I'm lucky that — "bossy" overuse aside — I have an overwhelmingly loving and supportive family who encouraged me from the onset to embrace my go-getting personality and to reach for whatever goal I had in sight. But it's easy to see how a girl without such helpful teachers and nurturing parents, and with less thick skin, could find her leadership qualities quashed by a pervasive, pejorative and pernicious five-letter word. One of these girls, for example:

When I sat down to write this article, I put out a feeler on Facebook, wondering if any of my friends had been called bossy. I received several messages, including some from people I hadn't heard from in years.

A female friend who coxes a high-performance men's rowing squad in the UK said she regularly gets asked, "Don't you have to be really bossy to do that?" — and it's never the girls who use the b-word, just the guys, she said. Another female friend told me she frequently gets called aggressive and intimidating at work — or even ballsy, which is another problematic b-word because it suggests that assertive women are successful because they're like men.

"I work for a private defense contractor, operating mainly in Iraq and Afghanistan, and it's essentially me against a whole office of big, burly, testosterone-filled, military men. I have to be very forceful with my opinions to make sure I'm not ignored, so I get called bossy a lot," a third friend told me. "The other day a guy from work said not only that I was bossy but compared me to an overzealous al-Qaida lieutenant."

This friend admitted that she hates the word bossy, but lets it slide at work because her male colleagues "openly admit that they only call me bossy because they're scared that I'm smarter than them." The b-bomb clearly isn't just a problem for school girls — it's used to minimalize women in the workplace, and it's an offensive that's been hurled at powerful ladies for decades.

To be sure, not everyone has climbed aboard Sandberg's campaign. Opponents took to Twitter to disagree with #banbossy's aims, or to point out the irony of someone bossing other people to stop using the word bossy.

But Sandberg's campaign isn't really a push to extinguish the word "bossy" from our vernacular in a literal sense. It's about raising awareness of how girls and boys are treated differently in the classroom, about how unthoughtful language affects our behavior in society and about how we can better encourage young women to be leaders. As Sandberg says, "Bossy is just the beginning."

This is a campaign I can get wholeheartedly behind. You should, too — and don't call me bossy for saying so.