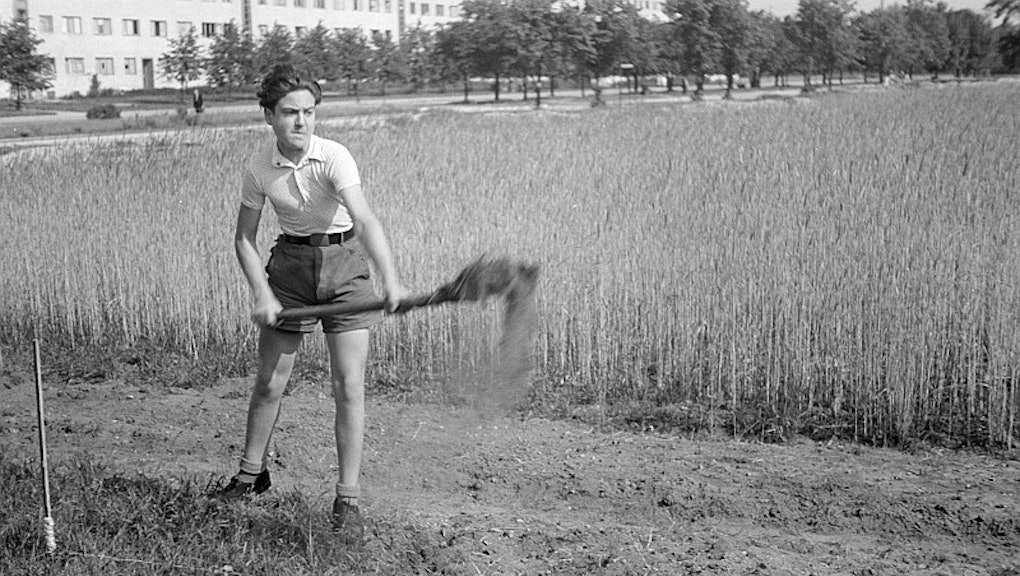 The Problem With the Lean In Debate? Men

Like many people, I'm tired of the "lean in" conversation.

It's not that the topic of women in the workplace annoys me — in fact, it's essential to discuss. But it seems that this movement to give women an equal chance in the workplace focuses on the wrong thing: Instead of tearing down women who "pick a side," we should be holding men's feet to the fire. And if you're a man and claim to respect women, it's time for you to grab a torch, too.

To be clear, the debate over Sheryl Sandberg's Lean In-inspired phenomenon is an important one, and I believe all sides have presented valid arguments. Sandberg's attempt to generate a national discussion has been generally successful and much needed, and that can't be understated. But criticism of her work also has validity, particularly when it comes to how race, class and public misperceptions of feminism intersect with her encouragement of women. (bell hooks gave what I felt was a comprehensive and brilliant analysis of this criticism.)

However, this month marks a year since Sandberg's book hit the market, and in all that time, the corporations that encourage — or are complicit in — sexist problems have largely escaped criticism. The premise of the lean in movement is that no matter how bad the misogyny they face, women should hang in there and not give up. While this may be a helpful philosophy for some, it ignores the harsh truth that the vast bulk of the problem has nothing to do with how much women are willing to endure, but how much institutions — and the men who run them — force them to endure.

Women have earned more bachelor's degrees than men every year since 1982, more master's degrees since 1987, and more doctorates since 2006. The gap in bachelor's degrees is especially startling: 56.7% of 2013 graduates are women, a margin of 13.2%. Were it an election, this would constitute a landslide victory.

Yet women still make up only 4.6% of Fortune 500 CEOs, 18.2% of the U.S. House of Representatives, 20% of the Senate, 27.4% of college presidents, 19.5% of law partners and 30.4% of active physicians. And then there's the gap in earnings. Are we really to believe that the reason women are dramatically underrepresented in every industry is because they're not trying hard enough? Or not leaning in enough?

Of course not. But as with every issue affecting women, from rape culture to their role in our military, we spend most of our time dictating what they should be doing rather than addressing what's being done to them and who's doing it. Sandberg seems to have avoided pointed criticism of corporate leaders. And can you blame her? If she were to spend more time lobbying her male peers, she would likely be dismissed as shrill, histrionic, a "feminazi" or any of the countless other misogynistic pejoratives we pin on women who have the audacity to point out the injustice they face in our culture.

Women in positions of power are stuck between a rock and a hard place: If they don't speak up enough on feminist issues, they're accused of betrayal. If they speak up too much, they're liable to be mocked, attacked, accused of rocking the boat or being ungrateful. Sandberg does what she can: empowering women while simultaneously keeping the topic in our national discourse. Men can see it and be reminded of it. But now it's time for men to do their part.

All this is to say that Americans need to spend a little less time criticizing women for doing too little and a lot more time holding men accountable. It's okay to encourage women to stick with it and to lean in, but the bulk of this conversation needs to focus on getting men to "dig deep" and ask the hard questions of themselves. We need to challenge all men — regardless of their self-identified progressive values — to advocate for women where it really counts: in front of other men.

Do I think women need men to fight for them? No. But women do need us to stand beside them, especially in spaces where few or no women are present to stand. From every water cooler conversation at work, to every night out with the guys, substantial challenges to our cultural sexism have enormous potential in men brave enough to speak up in predominantly male spaces.

A few months ago, the European Parliament — 65% of whom are men — voted with a whopping 66.7% majority to require a 40% quota of women on corporate boards in the European Union. Although this is still awaiting (expected) ratification by member states, it's a substantial policy move, and one that couldn't have happened if men in power didn't take their place in the trenches alongside their female peers.

Men need to pick up the slack. We need to be held accountable on our complicity. For too long, women who have been forced to fight twice as hard to overcome barriers while men stand to the side and watch. That should embarrass us and galvanize action.

Women can lean in or not if they so choose, but men need to "dig deep."