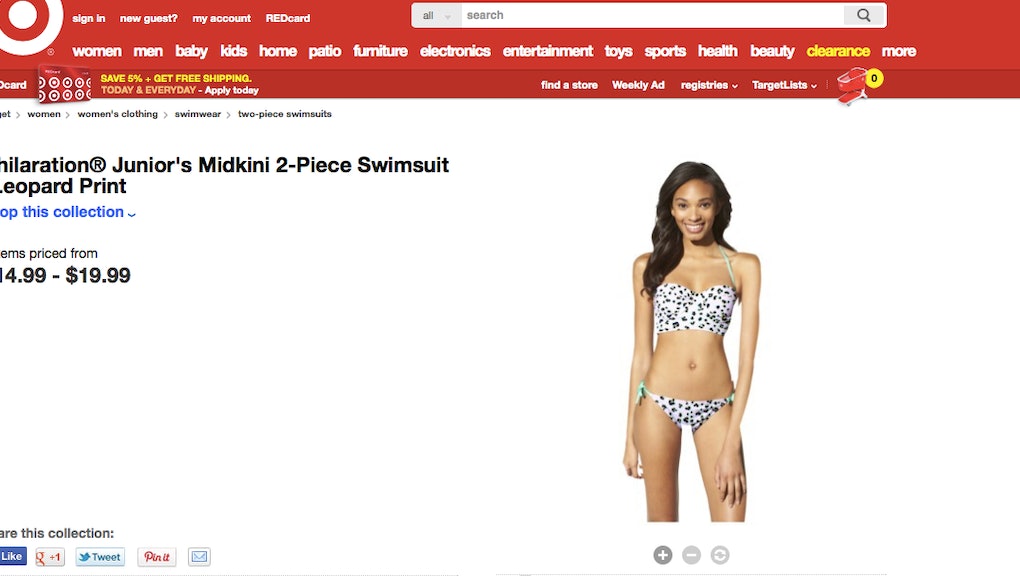 They really missed the target on this one.

The bargain behemoth's misstep was first spotted by blog The Ethical Adman, which noticed that the model for the "Xhilaration® Junior's Midkini 2-Piece Swimsuit -Leopard Print" featured on Target's website appeared to have a few anatomical discrepancies. (The link now appears to be broken.)

For one thing, the young woman's arms is bizarrely thinned out and stretches longer than it should. Then there's the fact that hip also appears to be missing a piece. But by far the most egregious use of the infamous airbrusher is in the woman's crotch area, where a chunk of the suit is literally chopped out.

Besides being bad practice, the effect of this photoshopping is to give the model what amounts to an artificial "thigh gap." This extremely problematic phenomenon first garnered media attention last year after eating disorder advocates noted teenage girls were striving for a body weight so low their thighs wouldn't touch even when they were standing with their feet together.

"The issue of focusing on a particular body part is very common," Claire Mysko, who oversees teen outreach and digital media for the National Eating Disorders Association, told USA Today. "What is new is these things have taken on a life of their own because of the Internet and social media."

Almost impossible to achieve, the "thigh gap" is, as VICE's Bertie Brandes pointed out last year, "not a particularly nice looking thing, it looks like someone cut it out on Photoshop."

In other words, it's exactly what Target has done here, albeit not very well.

Jezebel notes that this isn't the first time the chain has made some rather questionable calls in terms of its advertising, but this latest snafu proves companies have a long way to go still in terms of the way they portray beauty standards. That this is a bathing suit targeting younger women is just the cherry on top of an already very ugly objectification sundae.