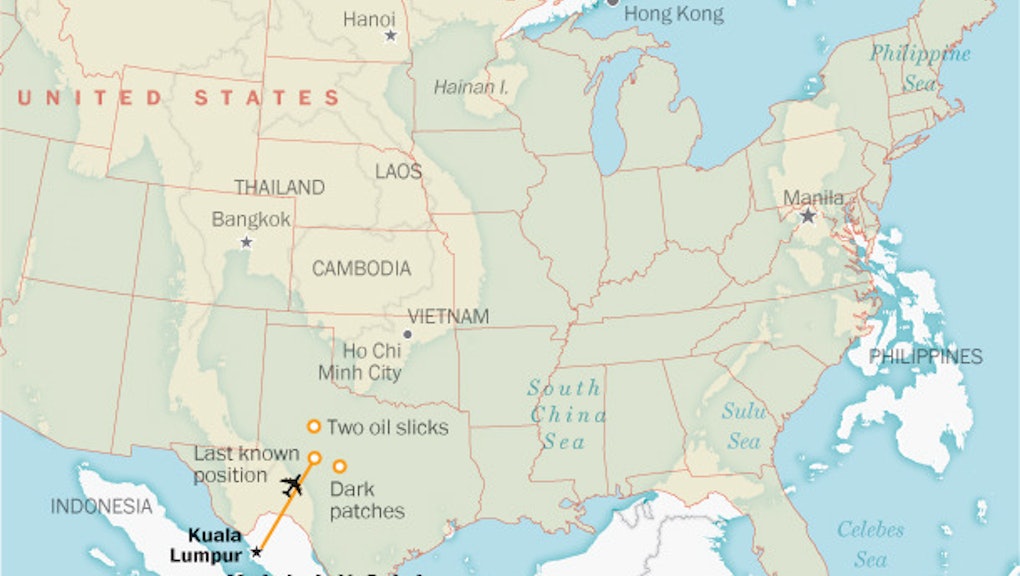 Since Malaysia Airlines Flight MH370 disappeared on Saturday morning somewhere over the seas between Malaysia and Vietnam, search operations have been combing the area around-the-clock to find a trace of the missing plane and its 239 passengers and crew members. Ten countries have contributed manpower and resources to the operation, although little has been found so far except for oil slicks and dark patches in the water.

There have been many theories floating around about what could have caused the Beijing-bound plane to malfunction or disappear, including a terrorist plot. But aviation experts maintain that we won't know what happened until they find the plane — or even a piece of it — and conduct forensic analysis. Until then, all they can do is search.

The combined search operations are taking place between two sites: around the plane's last recorded position, and at a possible location if the plane decided to turn around.

The search area comes in around 50 nautical miles, or 57.5 miles. If you want to get a sense of how big that is, here is a graph with a map of the United States imposed on top:

The entire width of Malaysia is swallowed up by the western wing of Texas, although a few signs of debris have been found outside the area. The plane had traveled approximately the distance between Washington D.C. and New York City before it disappeared.

Now 40 ships and over 30 aircraft are patrolling the area for any sign of the plane. "We are every hour, every minute, every second looking at every inch of the sea," said Malaysian aviation chief Azharuddin Abdul Rahman on Monday.