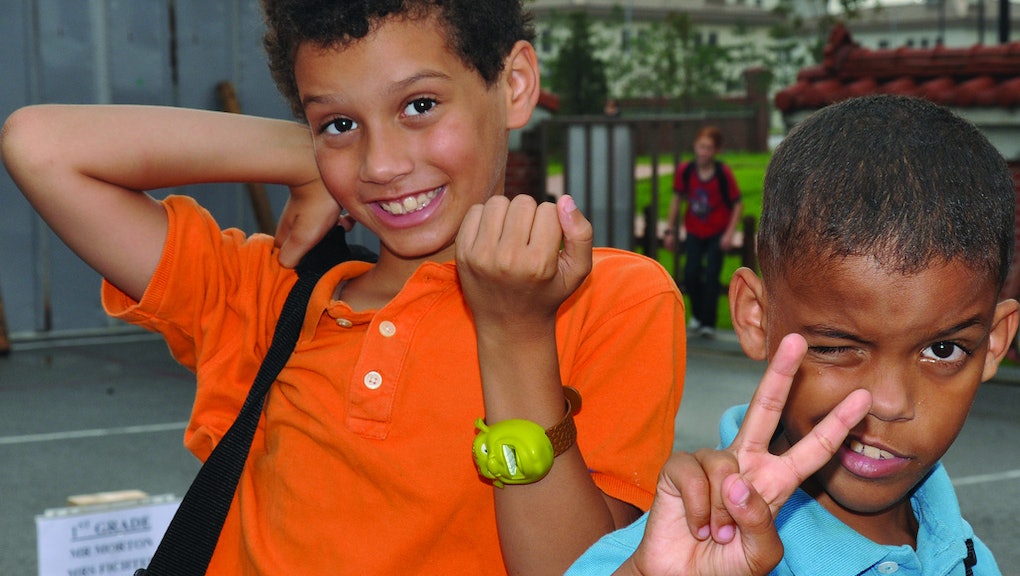 Black children are seen as older and less innocent than they actually are — particularly by cops, according to a new study published recently in the Journal of Personality and Social Psychology. The researchers also found that black children are more likely to be the subjects of dehumanization by police officers, making them subject to higher rates of police violence.

"Children in most societies are considered to be in a distinct group with characteristics such as innocence and the need for protection," study author Phillip Atiba Goff of UCLA told the American Psychological Association. "Our research found that black boys can be seen as responsible for their actions at an age when white boys still benefit from the assumption that children are essentially innocent."

Researchers surveyed 176 police officers, mostly white males in their late 30s, and found that cops who dehumanize black children are more likely to have used force against them. These police actions include anything from applying wrist locks, to striking the youth with blunt objects, to unleashing police dogs in their presence, to showering them with tear gas or even killing them.

Researchers also tested the officers for racial prejudices by presenting them with statements such as, "It is likely that blacks will bring violence to neighborhoods when they move in."

In a related experiment in the study, researchers asked 264 mostly white, female undergraduate students at public universities in the U.S. to rate the innocence of black, white and racially unidentifiable youth. These results showed little difference for subjects up to the age of 9 , but once they hit 10, the students judged black children to be considerably less innocent than their peers.

Similarly, the students were asked to guess the age and criminality of white, black and Latino teenagers. These subjects overestimated the age of black teens by a staggering four and a half years, and also judged them to be less innocent than their peers.

"With the average age overestimation for black boys exceeding four-and-a-half years, in some cases, black children may be viewed as adults when they are just 13 years old," study co-author Matthew Jackson, also of UCLA, noted.

The study is eye-opening because it draws a connection between racial bias and the innocence of children. While racial bias has been linked to harsher treatment of minority adults in the past, the study reports, "Racial prejudice has not previously been linked to treating individuals as if they are older than they are. In fact, racially disparate treatment of children has rarely been studied by social psychologists."

While this study is new territory for psychologists, it is just the latest in a string of evidence that shows how black people are perceived differently in the public eye. During the murder trial of George Zimmerman last summer, Jason Silverstein wrote a piece for Slate emphasizing a percieved racial empathy gap in America. He cited research showing that people who watched others undergo a painful experience felt that pain more acutely themselves when the victim was white rather than black. It's not that black people's pain gets disregarded by others, he points out, "The problem is that the pain isn't even felt."

Studies may also help explain why in 83% of Stop-and-Frisk cases, the subject was black or Hispanic, and only 1.5% of more than 2 million people stopped were found to have weapons, according to data collected between Jan. 2004 and June 2012. This trend suggests that police officers expect black and Hispanic people to be more culpable than they are.

Finally, YouTube duo Simple Misfits explored how the public reacts differently to a black man and a white man seemingly trying to break into a car. People walking down the sidewalk don't bat an eyelid when the white guy tries to steal a car, even though he's clearly hacking at the lock with a crowbar and the car's siren is beeping loudly. He lasts 30 minutes without being interrupted, and a police officer even drives past without turning his head. The black guy lasts two minutes before a cop shows up and says, "Let me see your fucking hands. Get up against the wall."

This study shows, yet again, how widespread racial biases lead to the unfair judgement and treatment of black people — especially black youths — in the U.S. judicial system.