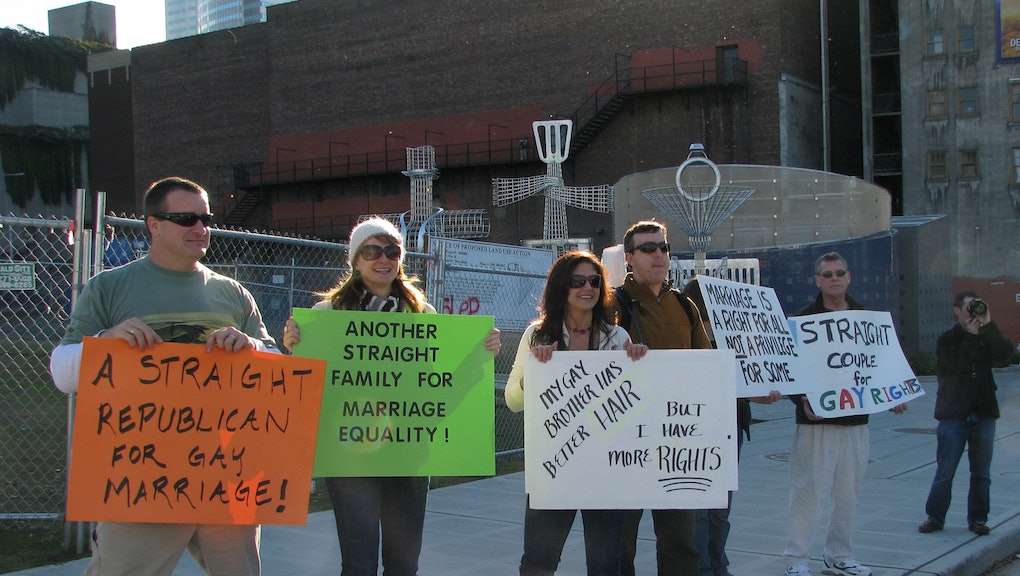 I consider myself an ally of many communities. A few weeks ago, however, I committed a faux pas. That's right, I slipped up, and inadvertantly offended a good friend of mine via something I posted on facebook. This occurence reminded me that in an age of instantaneous, copious information, it has become easier and easier to be desensitized to shock value and indifferent to objection. It happened to me, so informed it can be misconstrued as righteous, and it got me pondering the whole messy business of what it means to be an ally.

Being an ally is like holding a baby dragon. Sometimes it sleeps and is adorable and awesome because it breathes fire on things but OMG it just sneezed and ignited your roommate’s comforter. You dropped it and it got mad and went and rampaged all over your coworkers' conference table. Let's train the dragon only to scorch the things you want it to: haters. Do not impede progress by burning everything you and others' have built up. Make it, don't break it.

It's high time we all took a closer look at etymology. Some words are obvious in their heritage and despite having once been offensive, they have now been reappropriated for contemporary use. Communities have taken back vocabulary and phrases have become generic, but that doesn't meant they’re not offensive anymore. As allies, it is our job to be aware of the problematic and to educate, not perpetuate. The ability to rattle off a laundry list of privilege is not actually permission to use hurtful language.

LGBTQ allies are probably well aware of how "gay" and "queer" are used in a derogatory manner, but it's still important to keep checking in because these types of things evolve over time. Fun fact: "suck" is actually a homophobic slur that degrades a male listener by implying he engages in sexual activity with men, and that sexual activity with men is somehow bad. Language is power, so we need to know what we're saying.

If a friend tells you that he/she/ze/co/they would like different pronouns from what you had thought or that person previously used, just do it.

Some people use the excuse that after knowing someone a long time, it becomes hard to forget who they used to be. But therein lies the point, in a nutshell: used to be. If someone told you that they had developed a shellfish allergy involving anaphylaxis, would you still feed them shrimp? "But you used to be able to eat it!" And now your friend is dead.

Lest anyone think I am being too flippant in associating death with gender identity, I'd just point out the sobering suicide rate within the LGBTQ community.

Let's say for the sake of argument that you, like me, do mess up and say or do something offensive. The mistake may be clear at the moment it happens, or it may be called out later. Either way, the point is we all have to be better at checking our egos at the door, and just apologizing. It's generally not a great idea to try to excuse or justify or explain or defend what happened. Someone was brave enough to speak up, so we need to listen.

In the same vein, the mindset that "I meant well, so it's OK" is generally a pretty rotten one. Let's all just stop using that, ja? It is not anyone's place to explain why any particular word shouldn't be offensive in a certain context. That's their reality, and as allies, we have to be careful never to negate that.

Any Ally Declaration Speech that mentions a specific person and a label is thereby Othering, and should be stopped.

Think of it this way: You may support breast cancer research because your mom is a survivor, and that's awesome, but remember that breast cancer is a disease. Whatever cause you are an ally for isn't. It's important to not equate these two kinds of loyalty. Remember: There is a difference between acknowledging (thereby giving space) and tokenizing. Be the best cheerleader on the field by doing splits in the air, not by hanging on the elbow of a begrudging mascot you made come to every game.

5. Don't assume all jokes are funny.

We all know that moment in Mean Girls when Damian's page of the Burn Book reveals that he's "too gay to function" and Janis wails that it's "only funny when [she] say[s] it!" We have to remember with whom we're speaking but also consider whether whatever we're joking about is actually funny to everyone involved. There's so much room for humor in spaces that don't cut people down for who they are. Let's be creative rather than destructive, y'all.

6. Do remember solidarity is not shared experience.

If my experience slipping up has taught me anything, it's this: I am an ally, I have empathy, I have compassion, I have sympathy, I have a lot of things but I do not know what it's like. Our realities are unique to each of us. It's an amazing thing when we can stand with a cause, on behalf of individuals, using privilege as an advantage (think of Patrick Stewart standing up against domestic violence because "people will not listen unless you are an old, white man"). Assertions about "being there" or "knowing what it's like," however, often serve to dismiss the experience, rather than validate it. Allies are there to listen, support and be conscientious.