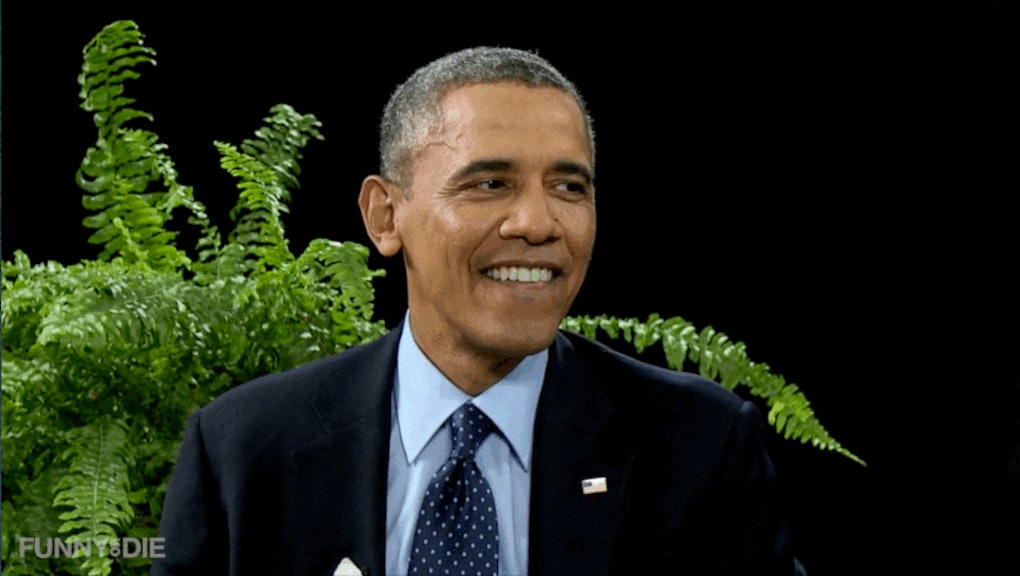 Obama Was Hilarious, Raw and Politically Brilliant in His FunnyOrDie Skit

If you haven't seen President Obama's appearance on Zach Galifianakis' deliberately painfully awkward interview show Two Ferns yet, you're missing out. During that skit, the president fields some pretty awful questions ("What's it feel like to be the last black president?" is probably one of the most offensive things ever said to a sitting president) and hit back with some nasty zingers of his own, all to increase Millennial awareness of Obamacare.

Yes, it's a pitch for Obamacare — but it's a damned good one as far as naked, obvious salesmanship goes. The whole thing culminates in Galifianakis showing the president a body-wide infected mass of spider bites, with Obama responding "You need to get on Healthcare.gov, because that's one of the most disgusting things I've ever seen."

And he even got in this amazing trollface:

The whole segment proves you can hit the right note in marketing to Millennials by respecting their intelligence and sense of humor, something the White House and Health and Human Services missed in previous attempts like this lazy attempt to co-opt the "doge" meme. And apparently it worked.

According to Mashable, it's the best launch of a FunnyOrDie video in the site's history, with one million views just three hours and 25 minutes after it hit the internet and three million in under six hours.

Says FunnyOrDie president of production Mike Farah, "The president talked to the creative community about the Affordable Care Act and some of the challenges facing it trying to get the word out ... [he] was familiar with Funny or Die and Between Two Ferns and Zach, so he kind of got it. I think we've got a lot of momentum with this now. So hopefully we can capitalize on it."

There are detractors of the president's appearance, though, and not just necessarily from the right-wing camp that would oppose anything he does to promote the Affordable Care Act. The Atlantic's David Graham questions whether or not this strategy is good for the country, rather than just President Obama — since it's "clearly important for the functioning of democracy for leaders to be subject to adversarial questioning, which Galifianakis clearly isn't delivering." To this mindset the president has more important things to be doing (and moreover, more serious things to be doing) than palling around with celebrities.

But, as Graham acknowledges, "part of the president's job is to communicate, and that's what he's doing here: trying to reach a specific audience." Obama needs Millennials for Obamacare enrollment and to build political capital for the 2014 midterm elections, and by appearing on Two Ferns, he's putting himself on our level — it's an odd show of respect for our generation's preferences and mindset. The president has rarely been this candid, engaging, and likeable, invaluable tools for a good leader. Graham writes that "slick media-messaging can only boost a president so far," but a boost is a boost, and this president just got a lot of positive press.