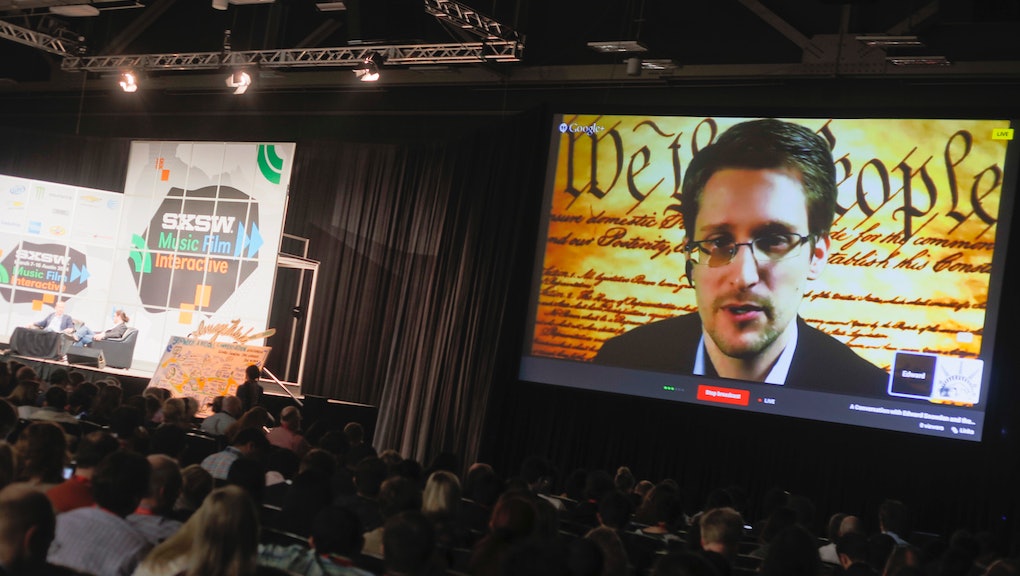 Snowden's Pandering to Entrepreneurs Proves What He Doesn't Know About Data

When Edward Snowden spoke via teleconference last week at the SXSW Interactive Festival in Austin, Texas, he had an unequivocal message for entrepreneurs: Tech startups should focus on building privacy and secure communication into their business models.

During peak viewership, more than 40,000 people tuned in to Snowden's live stream. Moderator (and Snowden legal adviser) Ben Wizner of the American Civil Liberties Union (ACLU) pointed out these were Snowden's first public remarks, and that he had chosen to take them to the "tech community, rather than the policy community."

But while Snowden's message is certainly an important issue for digital creatives to consider, Snowden failed to choose the right venue or audience, despite Wizner's introductory brag. Sam Biddle at ValleyWag believes that Snowden wasted his time, quipping that when trying "to recruit jihadis, you don't go to the Mall of America."

"Anyone who thinks a marketing conference is the right place for a pro-privacy speech is equally delusional," Biddle writes. "Edward Snowden could've spoken during any other time, on any other screen, before any other audience, but he picked Austin in March for a sympathetic ear. It was a bad choice."

What Biddle is saying, and what is absolutely true, is that data collection is crucial to startups. Snowden's message encouraged founders and developers in the room to build technology resistant to data collection; however, he failed to give them a credible alternative revenue stream if they didn't collect data on users. This is how companies compile information about demographics in order to run advertisements. Or figure out what products their users like best.

Instead, Snowden simply focused on the potential the crowd had to further his political mission, should they share his fervor. He told the crowd they were "the folks who [could] really fix things and enforce our rights for technical standards even when Congress hasn't gotten to the point of legislation to protect our rights in the same manner." Specifically, he wanted them to develop systems tech neophytes could use to bypass digital surveillance systems.

"We want secure services that aren't opt-in," Snowden said. During his teleconference, Snowden and Christopher Soghoian, principal technologist with the ACLU, agreed that "the next WhatsApp or Twitter [should be] using encrypted end-to-end communications," which means not everyone can see the messages on these sites unless they're authorized to do so.

But here's what Snowden — and Soghoian — get wrong: They equate corporate data mining with government snooping. While young people disproportionally mind the government listening in to their online communiques, they disproportionally don't mind companies using their data in exchange for a free service. In a Pew survey, 46% of 18 to 29-year-olds said they consider this practice fair.

If the SXSW panelists hoped to galvanize entrepreneurs to focus on encryption and privacy, they failed to note the relatively laissez-faire attitude of our generation. Ultimately, Snowden might have been better off taking his argument to the policy community in Washington instead.

Listen to the full live stream below: